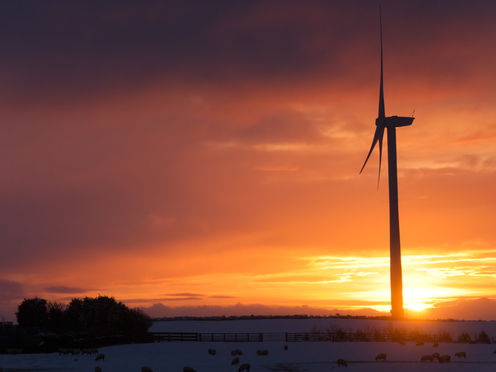 The UK’s onshore wind power industry may have been dealt a huge blow by new government policies announced last week, but this apparent setback should instead be seen as an opportunity. Elsewhere in Europe local, cooperative wind power is flourishing – could your town be next?

This wind turmoil comes at a point when politicians are widely struggling with the “energy trilemma” of balancing affordability and sustainability while also securing national supplies. The Queen’s Speech on behalf of the new Conservative government explicitly included a new Energy Bill designed to increase energy security – a clear prioritisation of one side of the “energy trilemma” in the next parliamentary period.

Changes affecting the UK’s onshore wind power sector include devolving consent powers for any large onshore wind farms away from the secretary of state to local planning authorities. The government also plans to end its commitment for new subsidies for onshore wind farms.

Taken together these measures appear to send out a strong signal that government support for onshore wind power in the UK is ending. Unsurprisingly, reactions to the announcements have been largely negative with companies fearing job losses and the terminal decline of this sector. Industry representatives are concerned about the capacity of local authorities to deal with these new powers in a competent and timely manner.

Yet at the same time, these proposals may provide the sector with a much-needed incentive and an opportunity to develop new business models that increasingly rely on and reward local ownership and support given that communities are now in charge.

The question is whether the onshore wind sector is able to turn this situation to its advantage, perhaps similar to the way the sector has flourished in countries such as Denmark and Germany. There, onshore wind projects are predominantly in the hands of mid-size firms and owned largely by communities and small investors. In Denmark, too, local municipalities determine whether and where wind turbines can be placed. This suggests that empowering local decision makers and drawing on citizen investment schemes can actually have positive effects on the industry.

This is a model that could be adopted in the UK but there are caveats. First, the success and growth of small-scale wind in the past has relied on financial support in the form of feed-in tariffs – a scheme that is now under review and likely to be limited. the industry must now demonstrate the ability to stand on its own feet to support itself financially.

In fact, onshore wind is already competitive and one of the cheapest forms of energy production. But it still has to compete with solar, offshore wind and other renewables for financial and governmental support, which leads to media complaints about how much these subsidies are adding to consumer energy bills.

Much then depends on project size. Typically, big wind farms tend to be developed by large companies backed by institutional investors. A modern 2.5MW (commercial scale) turbine, on a reasonable site, will generate 6.5m units of electricity each year – enough to make 230m cups of tea. So the large wind farms above 50MW affected by the changes would typically consist of more than 25 turbines. For them, the challenge will be to cooperate with and convince local authorities of the wider benefits of these projects in order to gain planning consent.

By contrast, many of the smaller projects have an inherent advantage. Increasingly they are crowd-funded such as one proposal by Yorkshire-based Edgehill, which seeks to raise £2.5m from investors chipping in as little as £50 to build ten turbines in ten different rural locations. With their risks and benefits shared between large numbers of individual investors, these projects are used to keeping locals happy, dealing with NIMBYs, and bringing them on as investors.

The question is which of the two project types and business models will become more successful in garnering local support over the coming years. It is possible that developers with closer links to local government authorities and community organisations are likely to emerge stronger from this political shift. In short, we might see more, but smaller wind farm projects.

There is also a regional dimension to this, as the proposed Energy Bill will definitely not apply to Scotland, and perhaps also exclude Wales. The UK currently has 538 projects worth 7,240 MW in the pipeline which will be affected differently depending on where they are located. For onshore wind, devolved powers for Scotland are a good thing. For example, 37 out of 45 proposed sites for large-scale projects awaiting planning consent are based in Scotland and so would remain unaffected by the latest proposals.

The future viability of the UK’s onshore wind energy sector will be determined by developers’ skills in attracting capital funding, managing local authorities and obtaining a “social license to practice” from affected communities.

Less clear, however, is how the government intends to square its declining support for the cheapest form of renewable energy and increased efforts to shore up the nation’s remaining oil and gas reserves with its other aim of “seeking to address climate change through ambitious action at home”. It seems that despite prioritization ultimately the government cannot escape the energy trilemma.

Frederik Dahlmann is Assistant Professor of Global Energy at University of Warwick. This article was originally published on The Conversation. Read the original article. Top image: Ian Britton, CC BY-NC