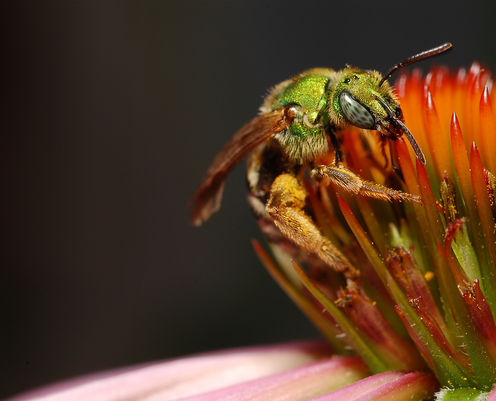 It’s bee season and now’s the time to go outside and observe these popular insects.

Bees hold a relatively special place in people’s affections – we have them to thank for honey, of course, and they’re also essential pollinators of many food crops and wild plants.

But most bees aren’t the snazzy hive-dwelling orange and black characters we know so well. In fact, there are around 20,000 species of bee globally and just seven of these are honeybees, and the vast majority of honeybee colonies belong to only one species: Apis mellifera.

So what about the rest? Well around 250 species are bumblebees, these big fluffy garden favourites are closely related to honeybees and also live socially with a queen and workers.


Take me to your leader. Tiago Cabral, CC BY-NC

But this still leaves us with around 19,700 bee species to account for. Indeed 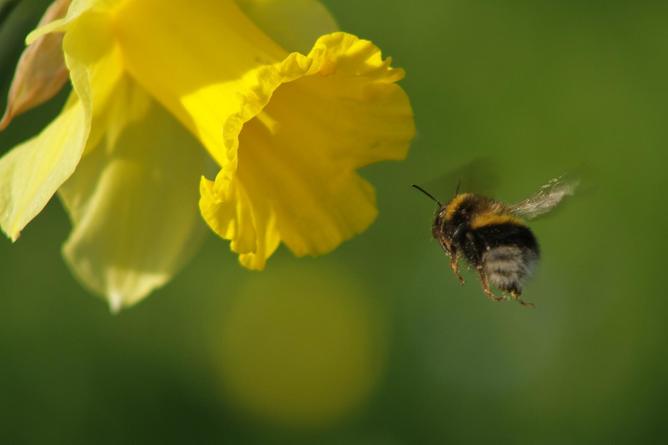 there are so many of them that the vast majority don’t even have a common English name and we have to use the scientific name.

Most of these remaining species are solitary; unlike social bees they do not have queens or workers, all females are reproductive and live independently. These solitary bees are important pollinators and have evolved all sorts of interesting characteristics more suited to a life flying solo.

Who needs a hive? 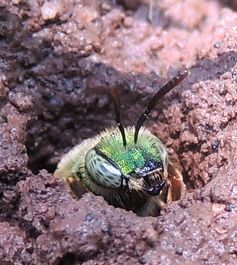 Lots of wild bees nest below ground. Some, like the tawny mining bee, Andrena fulva, often leave very noticeable nest entrances in lawns and parks, while other species such as Lasioglossum malachurum can be found nesting in the compacted ground of footpaths – keep a look out for tiny circular holes the next time you’re walking on a footpath, occasionally you can see the little face of the occupant.

Some species of wild bees nest in vegetation, such as Ceratina cyanea which sets up in the hollow stems of plants like brambles. Leaf-cutter bees like Megachile centuncularis cut out neat circular sections from leaves and use those to line the cells of their nests which are usually in timber or wall cavities.

One of the more unusual nesting strategies is that of Osmia bicolor, the females of this species nest in abandoned snail shells. They even go as far as to cover the shells with vegetation to hide them from view of predators and parasites.

A close relative of this species is O. bicornis aka the red mason bee, this is a very familiar garden visitor across Europe and Asia due to its habit of nesting in the brickwork of our homes.

If you look closely at the females you will notice two small horns on the front of its face (this is the inspiration for the scientific name “bicornis”), they use these horns like trowels to position mud they have collected to seal their nests.

Who needs pollyfilla? Not the red mason bee.

Adult bees usually only feed on nectar, they have finished growing so they just need sufficient energy and there’s no better energy drink for them than sugary nectar. Their larvae however need protein to grow and develop, so female solitary bees collect pollen from flowers and place a big ball of it in each nest cell before laying an egg and sealing the cell.

All bees are generalists in terms of the flowers they take nectar from, but some species will only take pollen from a small number of plant species.

Macropis europaea is an unusual bee. It is monolectic, which means it only collects pollen from one species of plant: yellow loosestrife. It doesn’t just feed its larvae on the pollen from this plant, it also collects fatty floral oils and mixes them with the pollen. This bee has very wide hind legs, presumably for transporting these floral oils. 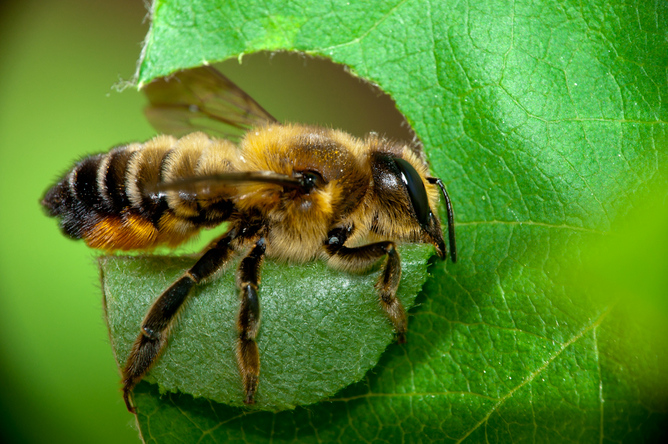 Leaf-cutter bees can save on roof insulation. JRxpo, CC BY-SA

Chelostoma campanularum is another food specialist, this tiny wasp-like bee will only take pollen from a few plant species and again the scientific name is relevant as these plants belong to the genus Campanula (bellflowers).

The males of this bee sleep in the flowers, so if you live in Europe and have any bellflowers in your garden keep an eye-out in summer especially early in the morning when the bees are still sleeping.

There is one family of wild bees often categorized as solitary bees, which contains some species that are not solitary. I like to call this confusing group the “social solitaries”, though in some parts of the world they are known as “sweat bees” as some species have developed a habit of licking sweat from people’s skin.

Some of these species appear to always be social, while others display both behaviors. Halictus rubicundus is a good example of this, as it is usually social in warmer areas and solitary in cooler ones. 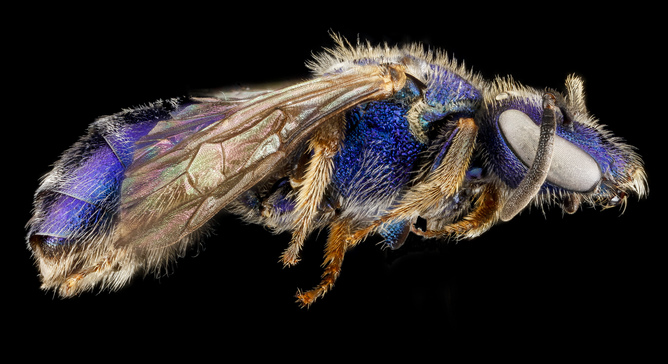 Some of the smallest bees in the world are in this group and they are also often among the most beautiful. Lasioglossum morio is a very small social species (5-6mm long) which has a metallic shiny green appearance. Unfortunately they are easy to overlook as they are so small and appear dark and colorless from afar.

This is just a taster of the huge variety of shapes, colors, sizes and behaviors of bees. If you want to learn more then try your local bee or hymenoptera recording society, like BWARS (Bees, Wasps and Ants Recording Society), they have pictures and information on all 240+ bee species native to the UK. 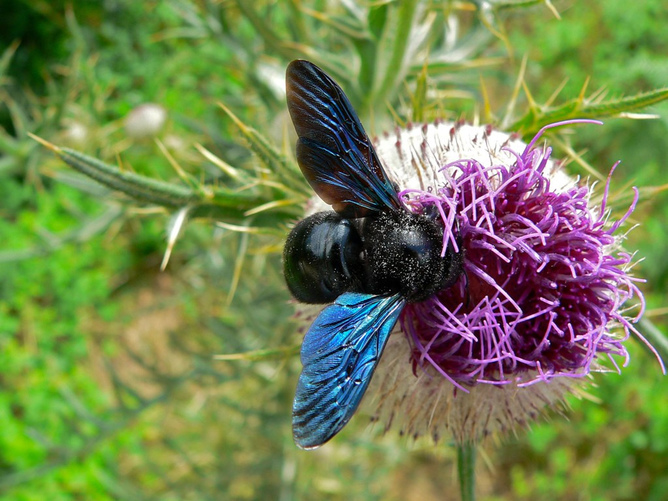 I have lots of favorite species, but there is one that I feel a particular affection for: Xylocopa violacea, the violet carpenter bee. This massive solitary bee has very beautiful iridescent purple wings; it’s currently native across continental Europe and Asia but a few individuals find their way to the UK most years.

Unfortunately I’ve never seen it in the wild, so I’m hoping it will soon colonize the UK.

By Ellen Dorothea Moss, Ph.D. Student in Ecology at University of Hull. This article was originally published on The Conversation. Read the original article. Top image: Glen Peterson, CC BY-NC-SA