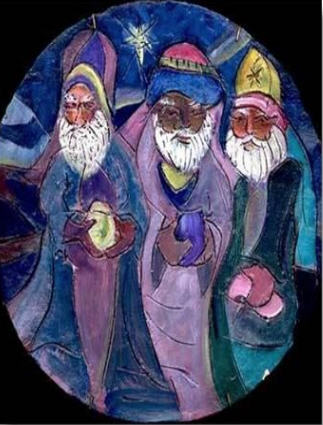 By Lisa Regan, University of Liverpool

The magi, as you know, were wise men – wonderfully wise men – who brought gifts to the Babe in the manger. They invented the art of giving Christmas presents.

So O Henry tells us in his classic Christmas story, The Gift of the Magi. It’s about a young down-at-heel couple in New York, who scrape enough money together to buy each other Christmas presents by selling their most prized possessions.

The wife, Della, sells her hair to buy a platinum chain for her husband’s watch and, in an ironic twist, Jim sells his watch to buy Della two beautiful, tortoise shell hair combs. But though the two have perhaps “unwisely sacrificed” their treasures, we’re reassured “that of all who give gifts these two were the wisest … They are the magi”.

Henry’s tale has been endlessly adapted for stage and screen. Perhaps this is because there’s something in it that we find so uplifting. The couple’s self-sacrifice for each other in the face of adversity is striking. But then perhaps it is also because the story appears to offer us an example of what the Marxist philosopher and sociologist, Theodor Adorno, would call “real gift-giving” – the kind which finds “its happiness in imagining the happiness of the receiver”.

Henry first published his story in 1905. Looking back to it makes me wonder whether he would find any magi among today’s hordes of shoppers. Adorno would probably say no. Back in 1951 he observed that gift-giving had:

Degenerated into a social function which one carries out with a reluctant will, with tight control over the pocketbook, a skeptical evaluation of the other and with the most minimal effort.

This might seem an overly bleak view of modern society, but there’s no escaping the sense of “social function” and calculation as we scroll through the “gift ideas” offered online, totting up how much we ought to spend and on whom as we go.

But Adorno, at least, seems convinced that there has at some point been a golden age of “real gift-giving”, which is more than can be said for other theorists on the gift.

In 1925 the sociologist Marcel Mauss published what has become an influential essay on the present. Investigations into the culture of gift-giving among Polynesian, Melanesian and north-west American clans revealed to Mauss that often just when gift-giving appears to be “voluntary, disinterested and spontaneous”, it is “in fact obligatory and interested”, compelling the recipient to return a gift for fear of incurring ill-luck or loss of status. Gift-giving between clans, Mauss found, was often competitive, with rivals using presents to secure hierarchies, political alliances and bonds over each other.

Following Mauss, Pierre Bourdieu suggests things are not so different in our own society. He draws our attention to “the sincere fiction of a disinterested exchange” with which we deceive ourselves. When we give presents we make ourselves believe we do so out of our consideration for others, but the truth, as Bourdieu sees it, is that we really do it to secure our own sense of honor and social standing.

And, as Bourdieu points out in his book, The Logic of Practice, we often feel obliged to offer a counter-gift in the same way we might, in another situation, answer a challenge with a riposte. The feminist philosopher and writer Hélène Cixous agrees. “For the moment you receive something you are effectively ‘open’ to the other”, she suggests, and it is this “openness” which we often perceive as “inequality”, as a “difference of strength”, a kind of “threat” that we have to neutralize by giving in return.

It’s precisely this notion of exchange, of reciprocity, that undermines the very notion of the gift, Jacques Derrida tells us. A gift should by its very nature, according to Derrida, be “that which interrupts economy” and breaks the circle of credit and debt.

But is this really possible? Cixous suggests it is if we accept that state of being “open” to another by giving without thought of return and refraining from giving the counter-gift. The first seems easier, though that runs the risk of appearing smugly munificent, while the second is trickier: by choosing to not reciprocate, we run the risk of appearing rude, ungrateful, uncaring, broke, and at the very least badly organized.

There’s no question in Henry’s tale that Della will find a way to give a present to her husband – she has been saving for months. And yet in the end, it is the hug that Jim gives Della when he realizes what has happened that elevates this particular gift-giving beyond exchange to the level of the magi. So perhaps Henry does point the way to “real gift-giving” after all.

And on that note, guilt free, I’m off to join the throng and finish my own Christmas shopping.

Lisa Regan, Lecturer of English at University of Liverpool, does not work for, consult to, own shares in or receive funding from any company or organization that would benefit from this article, and has no relevant affiliations.