Cigarette Smoking Associated With Increased Risk Of Psychosis
By The Conversation | July 11th 2015 11:58 AM | Print | E-mail

We have known for some time the people suffering from schizophrenia and other psychoses smoke more than the general population.

The explanation that is usually offered is the so-called “self-medication hypothesis”. This is the idea that people with psychosis smoke to alleviate the symptoms, which may include hearing voices or holding paranoid beliefs, or to counteract the side-effects of antipsychotic medication. But there is another possible explanation which has received scant attention to date: could tobacco smoking actually increase the risk of schizophrenia?

If so, how do you distinguish between these two possibilities: self-medication versus causation?

We suggested that if self-medication explained the link between smoking and psychosis, then rates of smoking would be relatively normal when the illness first began and would only increase later on. If, however, tobacco smoking played a part in increasing the risk of psychosis, we would expect people to have higher rates of smoking at the start of their illness. In addition, we would expect people who smoked to have higher risks of developing psychosis, and to have an earlier onset of symptoms, than non-smokers.

To test these hypotheses, along with colleagues Sameer Jauhar, Pedro Gurillo Muñoz and Robin Murray from King’s College London, we conducted a review of 61 observational studies comprising almost 15,000 tobacco users and 273,000 non-users. We analysed rates of smoking in people having their first episode of psychosis.

Our findings, published in Lancet Psychiatry, showed that 57% of these people with a first episode of schizophrenia were already smokers – this was three times higher than the rate of smoking in the control groups.

In a separate analysis, we also looked at prospective studies – ones that look at outcomes during the study’s period – that had compared the risks of psychosis in smokers versus non-smokers, with both groups followed up over time. Here we found that smokers were twice as likely to develop psychosis as non-smokers. In a third piece of work, we found that smokers developed psychotic illness around a year earlier than non-smokers. 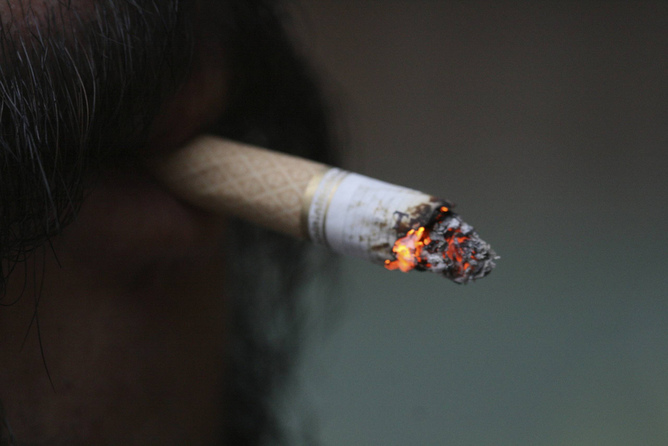 These findings call into question the theory of self-medication by suggesting that smoking may have a causal role in psychosis, alongside other genetic and environmental factors. However, despite finding an association between smoking and psychosis, we still cannot be certain whether smoking increases the risk of psychosis. The findings could also be confounded by other factors such as socioeconomic group and more research will be needed to establish this.

In addition, very few studies included in our review controlled for the consumption of substances other than tobacco, such as cannabis, which has been linked to psychosis in some users and which may have had an impact on the results.

Nevertheless, our findings indicate that smoking should be taken seriously as a possible risk factor for developing psychosis, and not dismissed simply as a consequence of the illness.

James MacCabe is Clinical Senior Lecturer in Psychosis Studies at King's College London. This article was originally published on The Conversation. Read the original article.