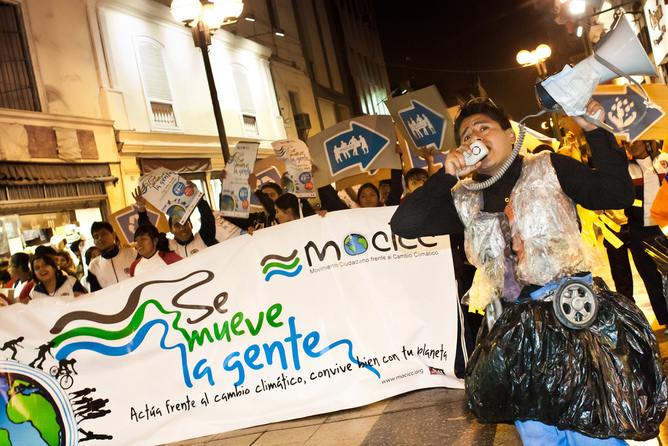 Senior officials representing nearly 200 countries will gather in Lima, Peru today for the final stages of United Nations-led climate change talks. The meetings, which began December 1, are intended to lay the final groundwork for a major international agreement to be reached a year from now in Paris, France.

Backed by a recent UN report, China, India, Brazil and other developing countries insist that any international agreement include additional financial support for adaptation. A typhoon that hit the Philippines on Sunday, the third such storm to to wreak havoc in the country in as many years, has added renewed urgency to this argument.

The rise of adaptation to the top of the negotiating agenda in Peru is more than a decade in the making, pushed forward by the behind-the-scenes efforts of thousands of civil society professionals and experts. In recent years, this emphasis along with a broader focus on fairness has been boosted by a growing climate justice movement.

Several recent studies provide insight on how the insider strategies of environmental professionals and the outsider strategies of activists have shaped the direction of climate change negotiations. They also point to the tensions between these two coalitions that might be on the horizon.

For thousands of environmental group staffers, business representatives, and academics, the annual UN climate meetings have become the ultimate mega-conference, write the University of Oxford’s Heike Schroeder and University of Edinburgh’s Heather Lovell in a 2012 study.

Based on interviews of attendees at past meetings, Schroeder and Lovell find that the lack of progress in negotiations has turned the formal UN climate talks into an event of secondary importance.

The negotiations “are not necessarily directly relevant to [the attendees] except as a way of bringing the large international community of people working on climate change together,” Schroder and Lovell write. If negotiations are stalled, reason the attendees, “then action should be taken using other avenues, that is, through business initiatives, partnerships between local authorities and so on…”

Over the past 15 years, the surge in registered participants at these mega-conferences has been substantial. At the 2000 meetings, some 6,000 registrants attended. By 2009, at the chaotic summit in Copenhagen, between 30,000 to 45,000 participants gathered, notes the University of Maryland’s Dana Fisher. Approximately one-third to half of all registrants are “observers” rather than directly involved in negotiations.

At the Lima, Peru meetings, an estimated 10,000 participants have registered. Attendance at next year’s Paris meeting is likely to exceed the Copenhagen mark.

Still, as Linköping University researchers Mattias Hjerpe, Bjorn-Ola Linner, and Katrina Buhr conclude in a series of studies, several significant outcomes are achieved by the networking, presentations, and socializing at the international meetings.

The official UN-sponsored side events – at times numbering more than 200 per meeting – help add legitimacy and transparency to the official negotiations, especially as the latter often appear hopelessly stalled. The exchange of ideas among insiders also fuels ideas and partnerships that are then implemented at the national, regional or private sector-levels.

Analyzing across years the subject focus and framing of UN-sponsored side events, Hjerpe and colleagues show evidence that these events have gradually helped shape the formal negotiation agenda. In what Hjerpe and colleagues call a “bandwagoning effect,” as issues such as poverty, human rights, and adaptation financing have become a major subject of the UN-sponsored side events they subsequently began to appear as part of the formal negotiations among countries.

New kids on the block

Hjerpe and his co-authors, however, note that the framing of the side events is predominantly non-confrontational, seeking compromise and avoiding conflict even as sticky issues related to social justice and fairness remain unresolved.

Yet at the 2009 Copenhagen meetings, outside activists began to shift the culture of consensus-seeking towards aggressive confrontation in the streets and elsewhere. As the University of Maryland’s Fisher writes, the meeting marked the emergence of the “climate justice movement."

Inspired by the tenth anniversary of the protests in Seattle against the World Trade Organization, activists arrived in Copenhagen intent on getting into the negotiations to “take over the conference for one day and transform it into a People’s Assembly."

Coordinated as part of a Global Day of Action, between 60,000 and 100,000 protesters took to the streets of Copenhagen. A survey study of approximately 240 of the Copenhagen protesters, led by Mattias Wahlström of Gotenborg University, provides important insight into their background and outlook.

The average age of the majority male protesters was 38 with more than ¾ indicating that they held a university degree and were of middle class background. Only 1/5 said they were active with an environmental organization over the past year. In comparison, 45 percent identified with the “global justice movement.” Ideologically, participants reported that they were strongly left-wing in political outlook.

More than 40 percent of the protesters surveyed said that the best way to solve climate change was through global justice or deep changes to the social system. Interestingly, those who had been active with an environmental organization over the past year were much less likely to say the best way to address climate change was through social justice or changing the system. Instead, they preferred other paths such as promoting individual behavior change.

The legions of demonstrators, numbering more than 300,000, that took to the streets of New York City in October 2014 for the People’s Climate March is the latest evolution of the social justice movement that was born at Copenhagen.

On December 10 – International Human Rights Day – activists will stage new protests as part of a The People’s Summit held in Lima, Peru and other locations across the world. To address the concerns of activists, the UN has appointed a special human rights envoy on climate change.

As part of formal negotiations, countries will also consider a pledge to “protect, promote, and fulfill” human rights as well as safeguards to protect native peoples relative to deforestation and clean energy projects.

It is a tough road to an agreement next year in Paris. Climate justice activists may be making an improbable deal nearly impossible. The Obama administration warned this past summer that the current focus on human rights “addresses the issue in polarized terms of north versus south opposition.”

What is more, activists also oppose as “false solutions” the inclusion of carbon credits or consideration of nuclear energy, even as these emissions reduction strategies are urged by a broad range of experts. Moreover, Copenhagen and New York City portend mass protests in Paris of equal if not substantially greater size and intensity, events that could fatally disrupt already fragile political negotiations.

Matthew Nisbet, Associate Professor of Communication at Northeastern University, does not work for, consult to, own shares in or receive funding from any company or organization that would benefit from this article, and has no relevant affiliations.