Tweet
When Australian singer and TV personality Mark Holden appeared as a clown recently on Channel 7’s "Dancing with the Stars", his supposedly “bizarre” behavior sparked furious debate and complaints to the network, demonstrating the problematic nature of the clown figure today.

The clown has a long history, ranging from the court clowns of ancient Egypt and imperial China, and trickster figures of Native American cultures, through the “sanctioned fool” of Renaissance drama and zanni of the commedia dell arte, to mainstay of the circus in the 19th century.

Due to the popularity of circus and Vaudeville, a number of clowns became internationally famous, including Swiss clown Grock, Catalonian Charlie Rivel, Russian Oleg Popov, and Americans Emmett Kelly and Lou Jacobs. In Australia, the Jandaschevsky siblings toured the country in circus and vaudeville from 1900 through the 1940s. 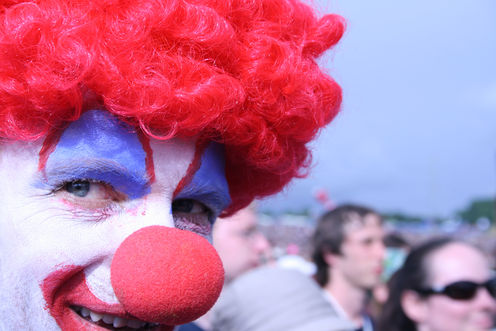 In the realm of pop culture, 'killer clowns' have really proliferated and fostered coulrophobia – the fear of clowns.Image by Mark Crossfield

The decline of touring companies and vaudeville reduced the visibility of the clown in the later 20th century. While clowns still operate in the circus and theatrical entertainments, they are more likely to be found in children’s entertainment, therapeutic and community fields.

Heath Ledger as The Joker in The Dark Knight. AAP/ Warner Bros.

There are various types of clowns and styles of clowning, but three types have become dominant:

There is little awareness today of distinctions between clown types, yet they remain strictly adhered to in professional clowning competitions. Krusty the Clown, a depressive with substance-abuse issues, with Sideshow Bob at Universal Orlando. Ricky Brigante

Unlike most stage characters, the term “clown” is representative of both the role played and the person playing it. As such, there’s a sense of otherness around the offstage self of the clown, as if he or she is always being shadowed by the anarchic onstage being. And yet, it’s our awareness that there is an offstage self that generates much of our uneasiness around this figure.

In the early 19th century Joseph Grimaldi made the clown a star attraction of British pantomime. As he endured personal tragedies, alcoholism and chronic pain, he also became representative of the “sad clown”, of the clown as a divided figure, split between his comic on-stage identity and melancholic off-stage self.

the clown becomes troubling only after a second, private persona has been revealed that stands in morbid opposition to the first. So, when the jovial onstage figure, whose very existence seems designed to make us laugh, is revealed to be a depressed alcoholic (Grimaldi), or rage-driven killer (France’s Jean-Gaspard Deburau), or convicted sex-offender (Australia’s Jack Perry, the “Zig” of Zig and Zag).

Undoubtedly, the most notorious of such cases is that of John Wayne Gacy, an amateur clown who was convicted of killing 33 boys and young men in Illinois in the 1970s.

Understanding of the clown as a figure to be feared intensified in the later 20th century. When it was reported that clowns were attempting to lure children into vans in Boston in 1981, the Public Schools District issued a memo to principals, urging them to “advise students that they must stay away from strangers, especially ones dressed as clowns.”

Yet it’s in the realm of popular culture that “killer clowns” have really proliferated and fostered coulrophobia, the fear of clowns. One of the most notable influences was Stephen King’s novel It (1986), filmed in 1990 with Tim Curry as the murderous supernatural being which takes human form as “Pennywise the Dancing Clown”.

The ubiquity of the “dark clown” trope is evident in itself becoming the stuff of comedy, as in "Seinfeld" episode The Opera, and the character of Krusty the Clown, a depressive with substance-abuse issues, in "The Simpsons".

The one real moment of emotion in the Mark Holden "Dancing With the Stars" episode occurred when judge Adam Garcia questioned whether the performance was a homage to King’s It, only to be angrily corrected by Holden - he was playing “Bobo the Clown” from his childhood.

The distance between Holden’s presumed aims for the piece and its actual effects reveal the complexities of the clown’s meanings today.

By Fiona Gregory, Lecturer, Centre for Theatre and Performance at Monash University, who does not work for, consult to, own shares in or receive funding from any company or organization that would benefit from this article, and has no relevant affiliations. This article was originally published on The Conversation. Read the original article.