As a tenured professor and mother of four young sons, I am constantly asked, “How do you do it?” What people mean is: “How can you have a full-time job and still manage child care and housework?”

I usually respond, “High-quality husband and high-quality child care, in that order.” From the outset, my husband, a full-time, clinical pharmacist, has been a committed partner in caring for our house and raising our children.

But I’ve learned that, with our equal division of housework and child care, he’s an outlier. There may be some like him, but our research group at The Ohio State University recently discovered that such husbands in dual-earner households are, indeed, rare.

In our new study of 182 dual-earner couples who became parents for the first time, we found that fathers generally did less work around the home after their baby was born, and also became less involved in childcare than mothers. This was surprising given that both parents worked at their jobs about the same amount of hours.

However, during the first weeks of parenthood, men cut back their housework by five hours per week, while women dropped theirs by only one hour. For men, their extra five hours did go towards child care, about 15 hours a week. This included around 10 hours per week of physical child care (the less “fun” work of caring for a child that includes changing diapers and bathing the baby), and about four hours per week of engagement (more enjoyable child care that includes playing with the baby). Thus, men added about 10 hours a week to their total workload after their child was born.

In contrast, we found that parenthood added about 21 hours per week to women’s workload. Because women maintained their 40-hour work weeks and their time in housework across the transition to parenthood, most of their additional work came from child care. Women spent about 15 hours in physical child care and about six hours in engagement.

Altogether, after becoming parents, women averaged more than an additional hour of work each day compared to their husbands. And it wasn’t the “fun” kind, either – it was primarily in the form of physical childcare.

After having a child, working women take on more housework and childcare duties than their husbands. Author provided

How could one tiny baby cause so much havoc for these couples who were previously enjoying equal divisions of labor?

When families experience big transitions or changes, family members have to create new roles and routines to accommodate the change. Thus, the transition to parenthood is a critical juncture in families whereby men and women create new routines and roles as mothers and fathers that may persist for years.

It is at this point that dual-career, college-educated couples stop sharing the work of the family equally and, we believe, fall back on what they observed in their own homes as children. They are also more likely to adopt societal norms that dictate what mothers and fathers should do: housework and child care as the domain of moms, with dads acting as supportive partners.

Interestingly, new fathers don’t seem to realize that they aren’t keeping up with their partners’ growing workload. When we asked, both men and women perceived that they increased their total work by more than 30 hours a week each after they became parents. But our more accurate time diaries told a different story – one where parenthood added much more work for women than men.

What should couples do? First, men need to take the initiative to be full partners in housework and child care. This means doing just as much housework after becoming a parent and taking equal part in the mundane work of parenting, such as changing diapers, in addition to the more fun work of parenting, like playing peek-a-boo or “airplane.” 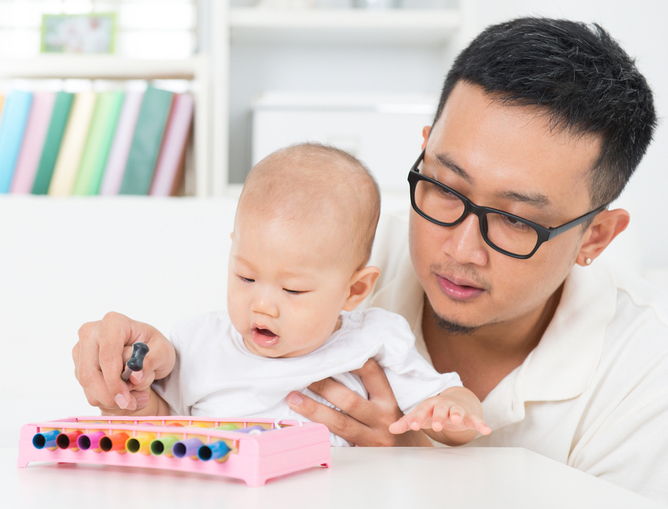 Why is it more fun and games for dads? Shutterstock

Unfortunately, women have been taught to believe that they are primarily responsible for housework and child care. Therefore, some will micromanage their partner’s parenting.

They might ask the father, “Will you get the baby dressed?” – but then tell him what the baby should wear. Or they might criticize the father if the baby’s diaper falls off. Some of these parenting duties take time to learn, and women should let men learn for themselves and make mistakes. Nonetheless, men ought to learn how to take on roles and duties as dads that they never engaged in growing up.

You might wonder how my husband answers the question “How do you do it?”

He doesn’t, actually – because he’s never asked the question. Strangers, upon learning that he has four sons, assume that I am a stay-at-home mother. No one expects that a dual-career couple can be happily married and have four children.

Unfortunately, in America, a husband who does half of all housework and child care continues to remain a rare, semi-mythical creature, who no one believes exists.

Claire Kamp Dush is Associate Professor of Human Sciences and Sociology at The Ohio State University. This article was originally published on The Conversation. Read the original article.