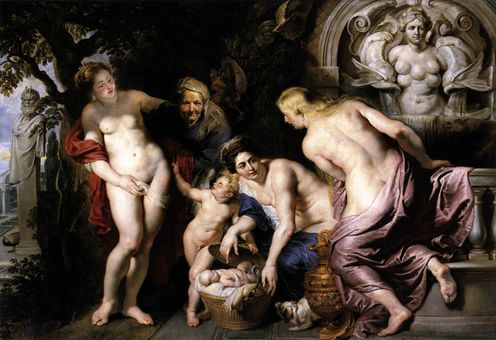 The Discovery of the Child Erichthonius by Peter Paul Rubens

The science and morality of creating a life with DNA from three different individuals is hot news.

The UK parliament has voted in favor of allowing trials of mitochondrial replacement therapy (MRT), otherwise also known as three-person IVF, which would allow women with mitochondrial mutations to have healthy children.

Of course, commentators have been keen to stress that such a child would have only two “parents” – the people raising the resulting offspring. The third person is the woman who gives the healthy mitochondrial DNA to compensate for a fault in the mother’s DNA.

For anyone who has studied ancient Greece, the situation of two women and one man contributing to a child will be familiar, as indeed are weird birth stories more generally. The father involved in the three-parent birth I’ll be describing here – the god Hephaistos – was himself the result of a most unusual conception.

His mother Hera became pregnant by eating lettuce (a plant associated with semen because of the milky white fluid in its leaves). In some versions of the myth she did this to take revenge on her husband Zeus, who himself had given birth with a minimal female contribution. He had eaten another of his many loves, Metis, while she was pregnant – and so he gave birth to their daughter Athena from his own head. The birth of Athena from Zeus’s head.

In an alternative version, Hephaistos was born before this Athena incident. When Zeus gave birth, the midwife – wielding the axe to cure Zeus of his monster headache – was sometimes shown as being Hephaistos. Many other myths of Hephaistos depicted him as a weakling, implying that someone born without a male contribution must be inadequate. Despite his many skills, in particular in metal-working, Hephaistos was represented as being lame.

It’s when we come to the conception and birth of Hephaistos’s son Erichthonios that we find a three-person conception. There are two women involved. The myth tells of how Erichthonios was born from Gaia, the goddess Earth. So she was in some ways a “parent”.

Hephaistos contributed the seed. But the reason that Erichthonios existed was Hephaistos’s lust for a third divine person, the goddess Athena – who had a special and obvious significance for the people of Athens.

So while Athena contributed no material to the child, if Hephaistos hadn’t lusted after her there would never have been an Erichthonios – and Athena is not just the object of desire, but the one who makes arrangements for bringing up the baby. Athena receives the baby Erichthonius from the hands of Gaia.

Hephaistos grew in the womb of Gaia and, when he was born, Gaia passed him over to Athena to care for him. In vase paintings of this scene, only the upper part of the body of the goddess Earth is shown. She keeps her connection to the soil.

Sometimes Zeus, the baby’s grandfather in two ways, is there too. But in other versions the scene involves Earth, Athena – and Hephaistos, standing by and watching the “birth” of his son.

Like us, the ancient Athenians were concerned about what “true parenthood” is. Was the biological aspect or the nurturing aspect most important? The myth of Erichthonios focuses on the contributions to the child made by Earth and by Hephaistos’s seed. Athena does not give any raw material to this child yet she is the one who looks after him when he is born, making arrangements for his care.

In this story of three people and one baby, it seems to me easy to answer the question: “Who are the parents?” All three divine persons. By having three people involved in his origin, Erichthonios helped Athenians think about their links to their native soil and to their chief deity Athena.

The myth shows awareness of how parenthood can be about nurture as well as nature. And the third person, Hephaistos, was also necessary to provide the crucial biological material. For the Greeks, it was seed: for us, it’s DNA.

There have been hypothetical three-parent babies for millennia. Now, we may be about to see them outside the world of mythology.

Helen King, Professor of Classical Studies at The Open University, does not work for, consult to, own shares in or receive funding from any company or organisation that would benefit from this article, and has no relevant affiliations. This article was originally published on The Conversation. Read the original article.