Hank Campbell
How would editors at National Review regard the credibility of a controlled market publication that had its economic policy articles written by astrologers using the stars as their evidence?

They might not like it but so what? Can they prove astrologers can't make economic policy? No, it's just flawed logic, sort of like me challenging someone to prove I am not an alien from space. That is the problem with National Review paying someone from the Discovery Institute to spout anti-science nonsense about 35-year-old science under the guise of 'ethics'. Because misunderstanding and logical head-faking is the strategy the Discovery Institute uses to promote doubt about biology in general and evolution in specific.

There is no way to sugar-coat it: The Discovery Institute is in the anti-science business. I have no issue with religion, I can nod my head at the idea of non-overlapping magisteria, I have defended religion and the benefits of a liturgical society probably more than anyone in science media and I recognize that western science would not have survived without religion. But there is no reason National Review should be letting an anti-science fearmonger take up this charge against science yet again. Conservatives claim to be more rational so there is no reason to embrace the irrational Discovery Institute, yet Wesley J. Smith, Senior Fellow at the Discovery Institute's Center on Human Exceptionalism and quasi-philosophical lawyer, is being encouraged to mask his anti-science agenda under the guise of ethics. Subjective, morally relative ethics, the kind of thing National Review founder Bill Buckley criticized in his book "God and Man at Yale".

Basically, Smith hates all in vitro fertilization. Always has, always will, it is a tool of Lucifer or whatever the Discovery Institute thinks about all biology. Going in with such blatant confirmation bias, he then massages data and logic to match his world view - the very thing National Review claims to stand against, when liberals are doing it.

He is a social authoritarian, except he goes to church. The fear-mongering in this case is three-person IVF.  It is apparently yet another example of his favorite slur to heave at researchers, scientocracy: the idea that scientists are inherently unethical.

Three-person IVF is simple enough. Some mothers have a mitochondrial disorder and that can obviously be problematic for a baby, since it is about 100% certain to be passed along. So by taking a healthy egg from another woman and removing the nucleus and putting in the nucleus of the mother, you have the same egg and the same baby minus the problems.  The UK government is arguing guidelines for it and it's worth considering in the US as well because it is an easily preventable problem.

Smith is not writing about IVF to promote conservatism or ethics, he is writing about it to promote fear and doubt about science that helps a lot of families. If you disagree you must support eugenics. Most conservatives are more nuanced than that but Smith has no problem implying infertile parents are evil if they use IVF. 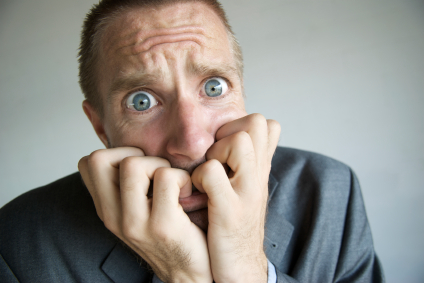 Oh no, science has a way to prevent some mitochrondial disorders. We must ban biology and, oh, by the way, let's get rid of teaching evolution unless it has a warning label too. Image link:jessandeeonline

Pick any year, I did a quick Google search and took one from 2006, and Smith is arguing that as long as IVF of any kind is legal, mean old unethical liberal scientists will start practicing eugenics again like progressives did 90 years ago. You should not get IVF, you should adopt, he has repeatedly cajoled parents from his sanctimonious perch while insisting government should ban a technology that has helped millions. But after that we can get back to our regularly scheduled conservative programming telling us that we don't want liberal busybodies controlling how we live our lives.

So what if IVF got the Nobel Prize in Medicine? To the Discovery Institute, science and medicine is a vast liberal conspiracy against religion and, by golly, if they they can imply that safer IVF might just mean more Democrats being born and invoke ethics to outlaw it, so much the better. Why don't conservative readers of National Review see that the real agenda of Discovery Institute is to deny science and promote a particular sectarian viewpoint, including in classrooms, exactly the kind of thing conservatives know the Founding Fathers didn't want?

Smith won't come out and just say he hates all biology, he will instead invoke the precautionary principle. Ironically, this is the same precautionary principle National Review critiques in liberals who want to ban fracking. And then he invokes slippery slope reasoning, the same slippery slope that National Review criticizes when liberals talk about mitigating climate change.

Conservatives, you can actually get a lot of votes among scientists - a whole bunch of them really dislike the social engineering and irrational naturalistic fetishes of the left. I know it doesn't seem like it, because the last 25 years has seen a real shift to liberalism in science academia, but the true enemies of the science behind food, energy and medicine are progressives - scientists know that, they write about it (and I wrote a whole book about it). It is the left wing who embraces astrology, psychics and ghosts and that really makes scientists crazy. Just stop embracing nonsense and lots of science academics will abandon the goofiness promoted by progressives.

When I talk to conservatives, they highlight the many positive things science has done, no one is against bone marrow transplants or IVF - and 40 years ago conservatives topped the list in science acceptance. Why, today, is someone with a blatantly anti-science agenda being allowed a national platform to promote nonsense virtually no one conservative agrees with?

51 years ago, Bill Buckley took a stand for reason against the fringe radicals in the movement. It is time for the modern National Review to do the same thing.
Science 2.0
More Articles All Articles
About