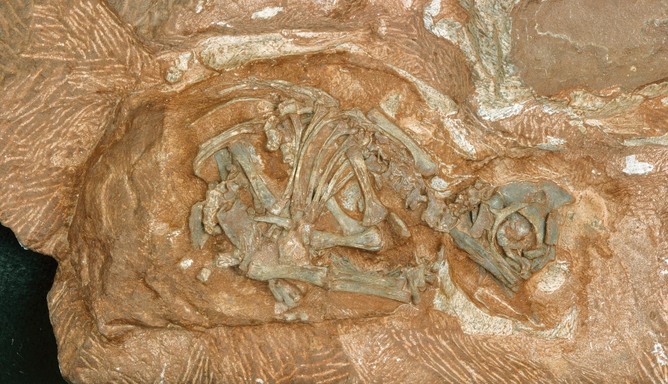 In the late winter of 1976, the world famous fossil collector James Kitching was doing a survey near South Africa’s border with Lesotho.

To his surprise he found a tiny clutch of six fossilized eggs along the side of the road at a place known as Rooidraai.

It took five years for skilled palentologists to remove enough rock matrix from the eggs so that they could be preliminarily identified as the first dinosaur embryos from South Africa and the oldest dinosaur embryos in the world.

Research on dinosaurs has truly blossomed in the 40 years since Kitching’s extraordinary find and a great deal more is now known about the baby dinosaurs in the eggs. But the exceptional secrets they hold are only now being fully uncovered because of developments in technology. This month the eggs were flown to Grenoble, a city at the foot of the French Alps, where they are being examined under a powerful CT scan at the European Synchrotron Radiation Facility.

The secrets of the embryonic dinosaurs whose parents roamed South Africa 200 million years ago are in the process of being hatched.

These high-resolution, 3D x-ray imaging methods are burgeoning in palaeontology. With advances in modern imaging methods we are now able to digitally remove rock matrix while making 3D models of the bones inside.

Side view of a 3D model of a juvenile Massospondylus produced from CT scans. Kimi Chapelle, MSc candidate

A quarter of a century after Kitching

Things take time in palaeontology. The eggs found by Kitching weren’t heard of again until a quarter of a century later.

A collaborative international team, led by renowned paleontologist Dr Mike Raath, in partnership with researchers from the University of Toronto and the Smithsonian institution, began to study the embryos in much greater detail. Diane Scott, one of the world’s greatest fossil preparators, painstakingly removed as much rock as possible from the clutch of eggs to expose the embryos for study.

A second group went back to Rooidraai and excavated the site where Kitching had discovered the eggs.

The results of the new studies were striking. The findings of the additional preparation, published in 2005, revealed two nearly complete embryonic skeletons of the dinosaur Massospondylus, a five-meter-long herbivore that roamed South Africa in the Early Jurassic Period. Unlike adult Massospondylus, which had small heads and walked on two legs, the embryos had big heads and when they hatched would have walked on four legs.

The second team also unearthed remarkable new findings. The excavations, published in 2012, found ten additional egg clutches, some with up to 34 eggs, scattered across the low cliff-face at Rooidraai. This was clear evidence that 200 million years ago, Massospondylus were returning year after year to nest in the Eastern Free State. Rooidraai in 1976, site of Kitching’s famous dinosaur egg discovery. The numeral ‘2’ marks the site of the nest. Supplied

So what remains to learn about the Massospondylus embryos after nearly 40 years of study? Although Diane Scott’s masterful preparation exposed many anatomical features of the tiny skeletons inside the eggs, there was a limit to even her abilities and many features remain buried beneath rock.

Learning more from the finds has been difficult for a number of additional reasons.

CT scans come to the rescue

The solution to all of these problems lies in CT scanning the specimen. The x-ray resolution needed to study the embryos is so high (six microns, or .006 mm) that only a few facilities in the world are capable of performing the study.

In late 2014, a team of us put together a winning proposal to scan the eggs at the European Synchrotron Radiation Facility in Grenoble. At the facility, a huge ring of electrons (almost a kilometre in circumference) traveling at .99% of the speed of light continuously generates beams of high-energy X-rays. These beams can be harnessed with great precision to peer through rocks and image the fossils inside.

A few weeks ago we traveled to Grenoble to start the first stages of data collection. Carefully packing the original clutch of six eggs in a custom-made cushioned travel box, we negotiated curious customs officers and surprisingly indifferent airline officials to spend seven days of round-the-clock work obtaining thousands of individual X-ray scans.

Processing this vast amount of data (more than 1000 GB) will take months of work at University of the Witwatersrand’s state-of-the-art Virtual Palaeontology Lab in Johannesburg. But our preliminary results show great promise. Hatched 200 million years ago, studied for over 40 years across several continents, Kitching’s famous discoveries are still yielding scientific dividends.

Jonah Choiniere, Senior Researcher in Dinosaur Palaentology at University of the Witwatersrand. This article was originally published on The Conversation. Read the original article. Top image: One of Kitching’s original find of eggs, after being prepared by Diane Scott. Author supplied