There is a growing demand for fruit and vegetables across the Western world, thanks to increased awareness of their nutritional and health benefits. But we’ve always been taught they might not be safe to eat straight out of the supermarket, and they have to be washed first. Is this the case? And what might happen if we don’t?

What’s in a veggie?

Fruits and some vegetables are often consumed raw, fresh-cut or minimally processed, which is often why there are concerns about their safety. Fresh fruits and vegetables and unpasteuriszed juices can harbor disease-causing bugs (knows as pathogens) such as Salmonella, Campylobacter, Listeria and Shiga-toxin-producing E. coli (strains of E.coli). They can also contain pesticide residues and toxic compounds produced by molds on the surface or even inside tissues of these foods.

Fresh fruits and vegetables may also contain allergens, which may be naturally occurring or contaminated, that can cause severe discomfort to people suffering from an intolerance. Of the potential risks, contamination with tiny bugs or organisms called microbes is the most prevalent.

The ingestion of very small numbers of dangerous bugs may not be harmful as our immune system can fight them off. But problems begin when the body’s defenses fail, causing these “bad bugs” to multiply and spread throughout the body.

In recent years, fruits and vegetables such as sprouts, celery and rockmelons were identified as potential sources of food-borne pathogens. They are more susceptible to being contaminated. This has caused a number of health and social issues and major economic losses worldwide.

Last year there was an outbreak of listeriosis in the US, a disease caused by the ingestion of bacterium Listeria monocytogenes, linked to commercially produced, prepacked whole caramel apples. Thirty-five people from 12 states were infected with the disease, and three people died. There could be more than caramel lurking in there. from www.shutterstock.com

In May 2011, Germany experienced the largest epidemic of hemolytic–uremic syndrome (a disease characterized by anemia, acute kidney failure and low platelet counts), caused by Shiga-toxin–producing E.coli associated with fresh produce such as fenugreek sprouts. Over a period of about three months nearly 4000 fell ill with symptoms such as headache and diarrhea, and a further 800 contracted hemolytic–uremic syndrome. Authorities reported 53 deaths.

In the US in 2011, cantaloupes become contaminated with the bacterium Listeria monocytogenes. One-hundred and forty-six people in 28 states were sick and 30 died.

While Australia is considered one of the safest food suppliers in the world, a significant number of foodborne illnesses are still reported every year. The government-funded organization OzFoodNet reported 674 outbreaks of enteric illness, including those transmitted by contaminated foods, in the last quarter of 2013 alone.

The washing of fruits and vegetables is one of the most important processing steps at the industrial level. Washing is designed to remove dirt and dust and some pesticides, and to detach bugs. Washing improves not only the safety and quality, but also the product’s shelf-life.

However, the quality of water used for washing is crucial. Washing water can serve as a source of cross-contamination as it may be re-used during harvesting and processing stages. Washing with sanitising agents is much better; washing removes microorganisms by detaching them from the products, and sanitising kills them. 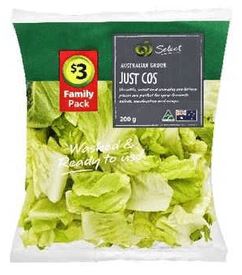 Washed and ready to use? Safer to wash it again. Screenshot from Woolworths website, CC BY

Although this first stage of washing can significantly reduce the level of pathogens, infiltration of pathogens into cracks, crevices, and between the cells of fruits and vegetables has been shown to be possible.

Once positioned in these niches, pathogens may survive and multiply by the time the infected produce is consumed. Therefore pre-washed produce may not be 100% safe. Peeling can help to get rid of bugs on the surface, but it also risks cross-contaminating the inner part of the product.

Cooking temperatures kill most of the pathogenic bugs, but the compounds produced by them (metabolites) may be heat-tolerant and can cause serious health issues. Washing may help to remove some of these compounds, but not necessarily all.

The risk of eating contaminated produce is much greater now than it has been in previous centuries because primary production, processing and trade of fruits and vegetables occur in diverse climates and within different countries' rules and regulations and food processing systems.

Most of these foodborne illnesses are preventable. Washing in clean running tap water significantly reduces the level of E. coli bacteria on broccoli and lettuce, although it doesn’t completely eliminate it. Therefore washing fruits and vegetables using clean water at home – including pre-washed products – before consumption may help minimise the risk of foodborne infections.

Never eat or buy produce that looks spoiled, however be aware produce that is contaminated may look, taste and smell similar to the produce that is safe to eat. Make sure kitchen surfaces are clean and use the correct temperature and time for cooking.

Washing fresh produce is an important part of ensuring your favourite fruits and veggies are safe to consume, but also be sure to pay regular attention to the media for any outbreaks or updates related to fresh produce safety.