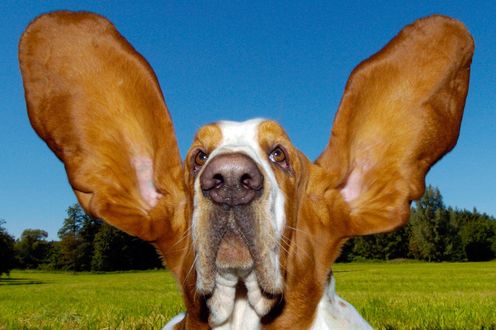 All the better for hearing you with. Boris Roessler/EPA

Sometimes it may seem like your dog doesn’t want to listen.

But in our study, however, we’ve found that he may understand more than he lets on.

Human speech is complex, communicating not only words but also tone, as well as information about the speaker such as their gender and identity. To what extent can a dog pick up on these different cues?

It’s well established that in humans the left hemisphere of the brain processes meaningful verbal content, as encoded in the fast-changing stream of audible sound. The brain’s right hemisphere, meanwhile, is more strongly associated with other information the voice carries, such as emotional tone – encoded in the voice’s slow-changing or static layers of sound.

Research has shown that if one side of the human brain is better at dealing with certain content in a sound, that content is heard better from the opposite ear. This is because the strongest sound pathways are those that cross-link the sensory organs – such as the ears – to their opposite hemisphere. In other words, the right ear links to the left side of the brain and vice versa.

What does a dog hear when it listens?

Animals also show this left-right distinction in response to sounds produced by their own species. But until now, it wasn’t known whether animals – and particularly domesticated animals such as dogs – respond in a similar way to the various different communicative components of human speech. So we set up a study, now published in Current Biology, to see whether this was the case.

Our set-up was pretty simple. Each dog was positioned between two loudspeakers, and either a human voice or another non-voice sound acting as a control was played simultaneously from both sides. We looked at whether the dogs turned their heads to the left or to the right in response to the sound, which indicated which ear they heard the sound more clearly through.

For the human voice clips, we modified them to make them either more verbal by emphasizing the fast-moving part of the sound, or prosodic, emphasizing the tonal, slower-moving part of the sound. We also varied whether the verbal content was familiar to the dogs, such as a command they’d learned, or meaningless to them, such as words in an unfamiliar foreign language.

Not just tone of voice

When the dogs heard the clip with enhanced verbal content in a familiar language, most of them turned to their right – indicating that the left hemisphere was tackling the verbal processing. This happened even when the speaker’s accent was strongly unfamiliar to them. But when the clip was in an unfamiliar language, most of the dogs turned to their left instead, indicating right hemisphere processing.

The majority of dogs also turned to their left when they were exposed to speech with positive emotional tones in which the verbal information was removed altogether.

When normal, non-modified clips were played, the dogs didn’t turn more to the left or the right. Perhaps this is because the opposite components cancel out when all the information is available in the speech signal.

What the study indicates is that dogs dissociate and process the components of communication in human speech in a broadly similar way to humans. The next step is to look at whether this common response between humans and dogs is a result of thousands of years of human domestication, or simply a common trait that dogs share with humans.

We can’t say from our study exactly how much our dogs understand when we speak to them. However, the results do indicate that they don’t just pay attention to who is speaking and their tone of voice – they also, to some extent, hear the words we say.

So even if he doesn’t always respond, he is listening.