Edutainment: Why University Lecturers Play To Their Audience
By The Conversation | January 16th 2015 05:30 AM | Print | E-mail 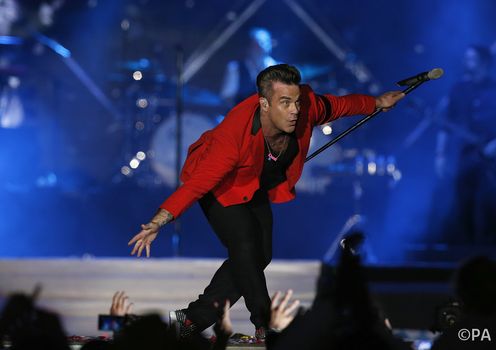 Can you dance like Robbie Williams? It would go down great in a lecture hall. Jonathan Brady/PA Archive

In his anthemic Let me entertain you, Robbie Williams urges his audience to “come and sing a different song”.

University lecturers could take a lesson or two from Stoke-on-Trent’s favorite singer-songwriter.

Edutainment, far from the pariah many in academia fear, could be one of the best ways of keeping the next generation of students engaged and interested.

Attention deficit in the millennial generation is becoming increasingly significant, particularly for university lecturers facing a wall of students staring into their laptop or smartphone screens.

Switching off technology devices is clearly not a problem restricted to higher education. The amusement park Thorpe Park has highlighted that one of its biggest competitors is the mobile device, where it is seen as a major draw in the entertainment space.

Other institutions have embraced those who want to watch through their phones. In 2014, Manchester City became the first English Premier League football club to install high-density wi-fi broadband at their stadium, providing further opportunities for commercial sponsorship engagement and activation.

Times not to multi-task

It seems if you are a digital native, you think you can do more than one thing at a time. Always on, wi-fi-enabled tablets and smart phones are materially changing our consumption behavior. There is a creeping acceptance of public, silent multi-tasking.

But my view is that we all benefit from focusing on a single task, particularly in a learning environment. Transfer this to the university classroom, and my new approach this academic year is to buck the trend and release my learning support presentation materials after the lecture, not before. The impact on students' behavior is noticeable and in my view, positive. They are tending to put their tech away and fully engage with the lecture.

My colleague Alan Bradshaw has taken further steps and banned personal technology from his classroom altogether, like schools do. He is convinced, like Bent Meier Sorensen at Copenhagen Business School, that it has made for a more productive learning environment.

Of course, there are reasons why releasing lecture material ahead of time can be useful for some students. For example, international students who do not have English as a first language often value a lecture transcript that can be read ahead of class. Of course anyone needing prior sight of materials can have them, but so far I have not had any requests.

Edutainment can beat the boredom

But banning distractions is not enough. My use of what I call “edutainment” seeks to employ (not very funny) attempts at humor, slides dominated by images and theatrical movement that invites extensive input from the large group. Beating back the boredom. Student sleeping via wavebreakmedia/Shutterstock

The conflation of education and entertainment is a notion that I suspect may invoke visceral reactions from some academics.

Sandi Mann, a psychologist at the University of Central Lancaster who researches student behavior, has said that elaborate fire-eating and juggling entertainment approaches are not needed to obfuscate student boredom. But others, such as the MIT researchers Tom Clay and Lori Breslow, argued in a 2006 faculty newsletter that professorial capability to engage and entertain students are an important determinant of lecture attendance.

I feel strongly that part of the role of lectures is to inspire and engage students in the learning process. Senior academics are described by some as celebrity-like rock stars, providing the spark to light the candle rather than pouring knowledge out of a jug.

In my view, the lecture has an important inspirational dimension that seeks to kindle a fire in the belly of students to begin rather than end their interaction with any given topic they are learning about. One of the simpler advertising effectiveness theories is: “breakthrough and engage”. It’s a powerful and relevant idea for the university lecturer.

It’s important to use both the theoretical frameworks and industry examples needed to teach a subject, but also engage the audience and set up an environment where many different students feel comfortable to speak up.

Spending interactive introductory time feeling the energy and mood of the group is an approach I have recently emphasized, thanks to collaboration with drama colleagues working with our MBA students at Royal Holloway.

Ice-breaking topical banter can also invite students to share what is on their minds using an exaggerated pantomimesque “I can’t hear you!” speakeasy style. The BBC recommends upfront student captivation as their first of ten recommendations to make lectures more dynamic.

Not everyone has to be a rock star

But galvanizing student engagement can be very difficult. I appreciate that lack of initial success with this approach can see reliance on the more traditional monologue style lecture. The “think, pair and share” technique, in which students pair-up to discuss questions posed by the teacher, can help overcome the stage fright experienced when students prefer not to speak up in larger lecture spaces.

Not every academic can be a rock star, but we certainly can enthusiastically create the learning spark and bring about a fun learning environment that blends education with elements of entertainment. “C'mon, Let me edutain you!”

Justin O'Brien, MBA Programme Director at Royal Holloway,  does not work for, consult to, own shares in or receive funding from any company or organization that would benefit from this article, and has no relevant affiliations.