Evolutionary MasterChef: Our Ancient Obsession With Food
By The Conversation | June 9th 2015 08:00 AM | Print | E-mail 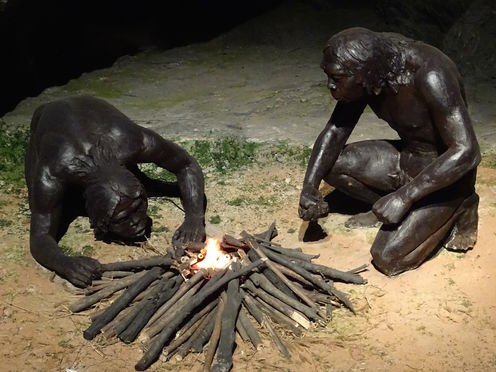 Amateur cook-offs like the hugely popular MasterChef series now in its seventh season in Australia have been part of our TV diet for almost two decades.

These shows celebrate the remarkable lengths we humans will go to to whet the appetite, stimulate the senses, fire our neural reward systems and sustain the body.

Yet, few of us pause to reflect on the hugely important role diet plays in the ecology and evolutionary history of all species, including our own.

In the latest episode of my UNSWTV video series ‘How did we get here?’, I take a light hearted look at the role diet has played in our evolution.

Episode 6 of my UNSWTV Series ‘How did we get here?’ explores the importance of cooking in our evolution.

So much of what we read about human evolution portrays the protagonists as unwitting players in a game of chance: natural selection acting through external environmental factors beyond their control and sealing their evolutionary fate.

Yet, all species influence their environment through the normal ecological interactions that occur in every ecosystem, such as between predators and their prey.

Such interactions shape ecosystems over long time scales and are profoundly important in terms of evolution.

When a species alters its environment and influences its own evolution, becomes a ‘co-director’ if you will, the process is dubbed ‘niche construction’.

The controlled use of fire and cooking of food must have been evolutionary game changers, being spectacular examples of niche construction.

Anthropologists like Richard Wrangham have argued that cooking probably even began more than 2 million years ago and may have played a key role in major changes such as a life permanently on the ground and our large bodies and brains.

The foraging strategy of human hunter-gatherers seems to have involved a focus on difficult to obtain but high reward foods, requiring sophisticated cognitive, cultural and social skills.

Our guts also reflect the food preferences of our ancestors.

Our small intestine represents almost 60% of our total gut volume, whereas in other great apes it’s around 15-30%.

Similarly, the large intestine (colon) of other apes is about 45% of total gut volume but only about 20% in humans.

These directly reflect differences in our diet: humans rely heavily on nutritionally dense and easy to digest foods like grains and animal foods rather than a diet based entirely on raw foods dominated by plant matter.

Another interesting facet of the human diet is the relationship we have with parasites like tapeworms.

Each year millions of people around the world are infested by one or more of the 20 species of human tapeworms through eating undercooked or raw meat from cattle, sheep, pigs and other sources.

Yet, surprisingly, we humans are the only species of primate that is a definitive host for several of these tapeworms; meaning they can’t reproduce without being eaten and hosted in the human body.

The only other mammals to be definitive hosts for tapeworms are carnivores.

Molecular clocks even suggest that human specific tapeworms evolved at least 100,000 years ago and perhaps as early as 1.7 million years ago when meat eating and cooking may have begun.

Traces of fire in the dirt

The archaeological evidence for the controlled use of fire and cooking is surprisingly thin on the ground and highly contested.

The earliest claimed evidence goes back to least 1.4 million years ago in Kenya at an archaeological site called Chesowanja in the form of burnt clay.

But this is controversial and a range of natural causes such as lightning strikes on trees could have caused similar signs.

More recent evidence from Wonderwork Cave in South Africa provides a much stronger case for hominin fire use by about 1 million years ago.

In Israel, at the site of Gesher Benot Ya `aqov, burned seeds, wood and flint are all argued to be evidence for the control of fire nearly 790,000 years ago. Excavations at Zhoukoudian during 2014 being conducted by members of the Chinese Academy of Science. Darren Curnoe

At the famous site of Zhoukoudian near Beijing Davidson Black claimed way back in the 1930s that Homo erectus had cooked its food hundreds of thousands of years ago.

The debate has continued ever since and remains unresolved: many local archaeologists claim evidence for burning at the site while geologists from abroad have suggested the deposits are natural not anthropogenic.

Controlled fire use seems surprisingly late in places like Europe, where good evidence for burning dates back to only around 300,000 or 400,000 years ago.

Yet, even this has been questioned, the evidence for regular and controlled use of fire perhaps being much later and associated with modern humans, rather with Neanderthals who may even have lacked the capacity to control fire.

Could our chimpanzee cousins offer any insights into the evolution of cooking, given that they don’t control fire?

A new study published in the journal Proceedings of the Royal Society B by Felix Warneken of Harvard University and Alexandra Rosati of Yale University set out to test this question.

They conducted nine experiments on captive chimpanzees at a sanctuary in the Republic of Congo and concluded that they indeed share several essential psychological capacities needed to cook.

These include preferring cooked over raw food, delaying eating in order to get cooked food, showing practical understanding of cooking and even saving food in anticipation of future cooking opportunities.

We humans are undoubtedly ‘evolutionary Master Chefs,’ being the only species that cooks, and as of 10,000 years ago, grows our own food.

But this new research shows that the shared ancestor of humans and chimpanzees, an African ape that lived 8 million years ago, had the necessary smarts to adopt cooking when the opportunity would eventually present itself.