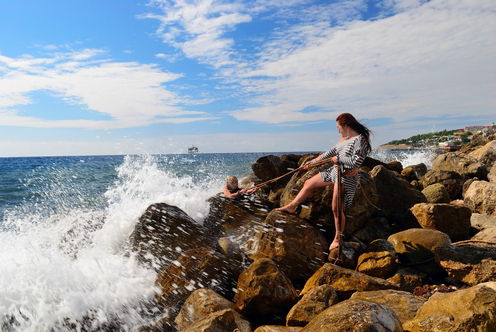 Intuitive processes may underlie decisions of those who help others while risking their own lives. Credit: AAresTT/Shutterstock

By Penny Orbell, The Conversation

If you noticed a person in grave danger would you act first and think later in order to save them? New research suggests people who put their own lives in danger to help others make the decision to do so without a second thought.

The motivation behind the behavior of 51 individuals who were classified as “extreme altruists” was looked at by researchers from Yale University, with the results published today in PLOS ONE.

“Extreme altruists make very large sacrifices to help strangers – like risking their lives to save those in need,” said one of the study’s authors, Assistant Professor David Rand.

The researchers analyzed statements made in interviews by people who were recipients of a medal for heroism. Study participants were told to rate the statements for evidence of intuition or deliberation. Computer text analysis was also used to confirm similar patterns.

The aim was to see if people who acted with “extreme altruism” did so without thinking or if some conscious self control was needed to override any fears or other negative emotions.

The responses of the medal recipients were found to be mostly “intuitive” and automatic, even in situations where these people may have had time to deliberate before taking action.

“Together with our prior results from the laboratory, these findings suggest that spontaneous, gut-level intuitions play a very important role in motivating cooperation, helping and altruism,” Assistant Professor Rand said. “Rational deliberation, on the other hand, often favors selfishness.”

The price of helping others

“Extreme altruism is very hard to study in the laboratory, since we can’t actually make people risk their lives,” Assistant Professor Rand said. “So instead most [cooperation] studies typically study low stakes helping – like deciding whether to share US$10 with a stranger.”

Studies of human cooperative behavior often use economic game theory to predict outcomes for individuals in social dilemmas. They do this by weighing up the costs and benefits of various individual strategies (such as behaving selfishly or cooperating) to calculate the payoff that each individual receives.

In situations where the stakes are high, altruistic behavior is individually costly. In the case of extreme altruism the cost is very high: these individuals risk their lives to help others. The researchers said that while cooperation is beneficial to the group, the personal incentive to be selfish can potentially undermine cooperation.

But cooperative behavior may be advantageous in low-stakes settings on a daily basis: it may pay to do someone a favor if it is reciprocated. The researchers said that in the long-term it’s in our best interest to help those we frequently interact with, and this is what could lead to the development of helping as an automatic default behavior.

The researchers argue that extreme altruism is an example of an “over-generalization” of our automatic, intuitive response to help others being applied in an a-typical setting.

“This was what we had predicted, based on many studies we and others have run in low-stakes situations, where paying (small) costs to help others is typically driven by intuitive processes while deliberation leads to selfishness,” Assistant Professor Rand said.

“At the very least, its clear that non-rational processes can play an important positive role in social choices.”

Madeleine Beekman, a professor of behavioral ecology from the University of Sydney, said that impulsive decision making could be adaptive in the context of humans evolving in small kin groups.

“You could say that our brain has been shaped by evolution to work in this way – it’s advantageous to be able to make quick decisions,” she said.

Peter Jonason, a lecturer in personality at the University of Western Sydney said that the estimates of the time it takes to make such life threatening decisions is unsurprisingly short.

“Indeed, evolutionary decision processes will have been shaped via natural selection to be fast in evaluating the costs and benefits – especially in contexts that resemble those of ancestral conditions,” he said.

Learning to get along

The authors of the study preferred to look to psychological, rather than evolutionary, explanations for their results.

“Just because something is an intuition does not mean that it is genetically hard-coded.

“Our data do not directly speak to this, but I am sure that it’s the case that social norms and social pressure affect extreme altruism. For example, I bet that people would be more likely to engage in altruistic behavior if others were watching (and could see them acting heroically).”

Some limitations to the study were acknowledged by the authors, such as whether the distinction between intuitive and deliberate behavior was properly understood by the participants analyzing the medal winners' statements.

There may have also been a bias in how the medal winners remembered the heroic incidences they described. For example, personal descriptions of thought processes and what the actual thought processes were at the time may not necessarily match up.

Dr. Jonason said that there are likely strong social pressures for people to say things that may involve self-depreciation.

“The whole study relies on the assumption we can trust what these heroes say are the reasons they did what they did,” he said.