One of the most baffling puzzles of modern astrophysics is the nature of Fast Radio Bursts, which were discovered in 2007. These are seemingly rare, extremely bright flashes of light with radio wavelengths. They last only milliseconds; originate outside our galaxy, the Milky Way; come from regions with enormously strong magnetic fields; and pass through a significant amount of gas or dust before reaching Earth.

All of these facts may make it sound as though scientists know a lot about Fast Radio Bursts. In reality, we don’t. For instance, though we know they’re not from our galaxy, we don’t know where exactly they come from. We don’t know what causes them. And we’re not sure whether they might be useful as cosmological standards to measure the large scale properties of our universe.

Dozens of theories about Fast Radio Bursts have been proposed. Some conform to standard physics. Others are more exotic, including cosmic strings – hypothetical, one-dimensional structures formed in the early universe – or even rather bizarre: one theory suggests that aliens are responsible.

Now, in an attempt to discover the truth about Fast Radio Bursts, we have created a catalog that lists each theory, along with its pros and cons. Scientists from around the world can weigh in, and new data and discoveries will be added throughout the process. 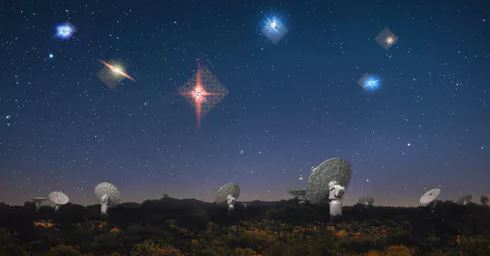 An artist’s impression of fast radio bursts in the sky above the Australian SKA precursor, ASKAP. OzGrav, Swinburne University of Technology

Some of this data will come from projects on the African continent, like the Hydrogen Intensity and Real-time Analysis eXperient (HIRAX), MeerKAT, and the Square Kilometre Array (SKA), which are expected to discover and localize thousands of Fast Radio Bursts.

This platform will produce a great deal of knowledge. It will also provide valuable insight into scientific sociology as international researchers work together and ultimately, we hope, identify the most acceptable model.

A range of hypotheses

Perhaps precisely because they are so elusive, Fast Radio Bursts have received a lot of attention from astronomers, astrophysicists, cosmologists, and physicists in the years since their discovery.

These are the main hypotheses that have emerged so far.

In such processes, enormous amounts of energy are released over short timescales. This could possibly create radiation akin to Fast Radio Bursts.

And then there’s the suggestion that Fast Radio Bursts are evidence of aliens. It’s certainly the most unusual of the proposed ideas, but it cannot be ruled out as a possibility yet.

Although it’s unlikely, Fast Radio Bursts may be signals from a beacon set up by an extraterrestrial civilization, or perhaps from light sails that harness photons to travel across the galaxy.

There’s a remarkable variation in these models, and it’s hard work to narrow down the options and reach consensus. Of the 50 theories or models proposed to date, only three have been eliminated. This is what prompted us to set up the catalog and to invite engagement from the broader scientific community.

It’s no easy task to get scientists talking to each other about Fast Radio Bursts. That’s because the scientists in question have different specializations and are from all over the world.

The online catalog provides a suitable and accessible platform for discussion, debate, and the sharing of knowledge. There is also a traceable history, which creates an opportunity for us to study how as humans we work together to solve scientific problems – and perhaps how this process can be optimized in the future.

Part of our motivation, as theoretical physicists, was to develop this engagement and to dive in ourselves. The problems are rich and the waters are deep.

Data about Fast Radio Bursts is starting to pour in now, thanks to such game-changers as MeerKAT and HIRAX. As it arrives, is examined and papers are published, we’ll be able to start ruling out theories and digging deeper into viable theories. Within five years, this mystery could be solved.

By Emma Platts, PhD Student, University of Cape Town and Amanda Weltman, South African Research Chair in Physical Cosmology, Department of Mathematics and Applied Mathematics, University of Cape Town. Emma Platts is supported by a PhD fellowship from the South African National Institute for Theoretical Physics (NITheP). Amanda Weltman receives funding from The Department of Science and Technology and the National Research Foundation of South Africa. She is a member of the Global Young Academy and a Next Einstein Forum Laureate. This article is republished from The Conversation under a Creative Commons license. Read the original article.