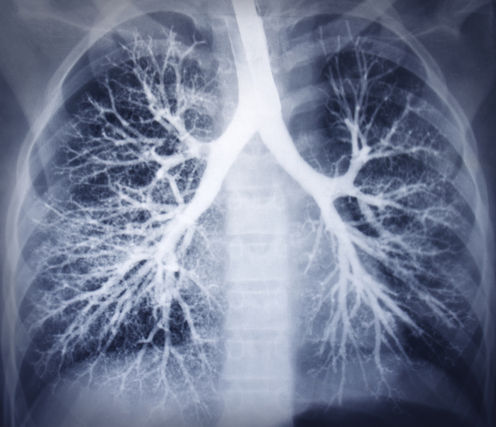 Leaky blood vessels in the lung can lead to acute respiratory distress. Shutterstock

By Jalees Rehman, University of Illinois at Chicago

When you get an infection, your immune system responds with an influx of inflammatory cells that target the underlying bacteria or viruses.

These immune cells migrate from your blood into the infected tissue in order to release a cocktail of pro-inflammatory proteins and help eliminate the infectious threat.

But if the infection is so severe that it overwhelms the immune response or if the patient is unable to restore the blood vessel barrier, fluid moves out of the blood vessels and begins pouring into the tissue. This “leakiness” is what can make pneumonia turn into acute respiratory distress syndrome. ARDS, by my estimate affects hundreds of thousands of people each year worldwide. In the US around 190,000 people develop ARDS each year and it has a mortality rate of up to 40%. In people with Ebola, this leakiness is also often deadly, causing severe blood pressure drops and shock.

New therapies to fix the leakiness of blood vessels in patients suffering from life-threatening illnesses, such as acute respiratory distress syndrome and Ebola virus infections, have the potential to save many lives.

Severe pneumonia can lead to acute respiratory distress syndrome (ARDS), a complication in which the massive leakiness of blood vessels in the lung leads to the fluid build-up, which covers the cells that exchange oxygen and carbon dioxide. Patients usually require mechanical ventilators to force oxygen into the lungs in order to survive.

Pneumonia is one of the most common causes of ARDS but any generalized infection and inflammation that is severe enough to cause massive leakiness of lung blood vessels can cause the syndrome.

For people with ARDS treatment, options other than ventilators and treating the underlying infection are limited. And suppressing the immune system to treat this leakiness can leave patients vulnerable to infection.

But what if we specifically target the leakiness of the blood vessels? Our research has identified an oxygen-sensitive pathway in the endothelial cells which line the blood vessels of the lungs. The leakiness or tightness of the blood vessel barrier depends on the presence of junctions between these cells. These junctions need two particular proteins to work properly. One is called VE-cadherin and is a key building block of the junctions. The other is called VE-PTP and helps ensure that VE-cadherin stays at the cell surface where it can form the junctions with neighboring cells.

When the endothelial cells are inflamed, these junctions break down and the blood vessels become leaky. This prompts the cells to activate a pathway via Hypoxia Inducible Factors (HIFs), which are usually mobilized in response to low oxygen stress. In the heart, HIF pathways are activated during a heart attack or long-standing narrowing of the heart blood vessels to improve the survival of heart cells and initiate the growth of new blood vessels.

We found that a kind of HIF (called HIF2α) was protective in lung blood vessel cells. When it was activated, it increased levels of the proteins that support the junctions between lung cells and strengthened the blood vessel barrier. But in many patients, this activation may not start soon enough to prevent ARDS.

The good news is that we can activate this factor before the lung fluid accumulates and before low oxygen levels set in. Using a drug, we activated HIF2α under normal oxygen conditions, which “tricked” cells into initiating their protective low-oxygen response and tightening the blood vessel barrier. Mice treated with a HIF2α activation drug had substantially higher survival rates when exposed to bacterial toxins or bacteria which cause ARDS.

Similar drugs have already been used in small clinical trials to increase the production of red blood cells in anemic patients. This means that activating HIF2α is probably safe for human use and may indeed become a viable strategy in ARDS. However, the efficacy and safety of drugs which activate HIF2α still have to be tested in humans with proper placebo control groups.

Could this treat Ebola?

The Ebola virus is a hemorrhagic virus and is also known to induce the breakdown of blood vessel barriers. In fact, it is these leaks in the blood vessels that make the disease so deadly. Due to the leakage of fluid and blood from the blood vessels into the tissue, the levels of fluid and blood inside the blood vessels decrease to critically low levels, causing blood pressure drops and ultimately shock.A group of researchers in Germany recently reported the use of an experimental drug (a peptide) developed for the treatment of vascular leakage in a 38-year-old doctor who had contracted Ebola in Sierra Leone and was airlifted to Germany. The researchers received a compassionate-use exemption for the drug and the patient recovered.

This is just a single case report and it is impossible to know whether the patient would have recovered similarly well without the experimental vascular leakage treatment, but it does highlight the potential role of drugs which treat blood vessel leakiness in Ebola patients.

Jalees Rehman, Associate Professor of Medicine and Pharmacology at University of Illinois at Chicago, receives funding from the National institutes of Health (NIH) and the National Science Foundation (NSF).