Have you ever wondered what those food additive numbers in the ingredients list on your food packaging meant and what they were really doing to your body?

A recent study suggests emulsifiers – detergent-like food additives found in a variety of processed foods – have the potential to damage the intestinal barrier, leading to inflammation and increasing our risk of chronic disease.

The research was done on mice, so it’s too early to say humans should stop eating emulsifiers, but let’s examine the mechanisms involved.

The lining of our gastrointestinal tract has one of the toughest jobs around. It must allow fluid and nutrients to be absorbed from our diet, while also acting as a barrier to prevent the invasion of toxins and harmful bacteria into our bodies.

The cells that make up the intestinal lining secrete a gel-like mucus and a variety of antimicrobial substances, which normally protect them from bacterial infection. But changes in the types of microorganisms living in the gut – from drinking too much alcohol, viral infections, certain drugs and exposure to radiation – can all reduce the integrity of the gastrointestinal barrier.

The hundreds of species of microscopic bugs living in the human gastrointestinal tract (collectively called the “gut microbiota”) play an important role in assisting us to digest food, educating our immune system during its development and increasing the absorption of important minerals from our diet. Some beneficial species of bacteria can even break down the food that reaches our bowel to produce special types of fats, called short-chain fatty acids. Once absorbed into our bloodstream, these fatty acids can positively influence health by reducing our appetite and lowering our blood sugar levels.

Under normal circumstances, the gut microbiota are unable to grow on the thick mucus layer attached to the intestinal cells. However, if our intestinal lining becomes damaged, specific harmful bacteria are able to move from our gut across the lining and into our bloodstream.

Immune cells in the blood then recognize and try to attack the foreign invaders by producing inflammatory compounds. Over time, this can result in a chronic low level of inflammation in the gut and throughout the body.

The word inflammation comes from the Latin “inflammatio”, meaning set alight or ignite. It’s the body’s attempt to protect itself by removing harmful stimuli, including damaged cells, irritants or pathogens, and begin the healing process.

Inflammation is part of the body’s immune response. Initially, it is beneficial when, for example, you scratch your hand and the body mounts an innate immune response to send immune cells to the area to attack foreign microbes and repair the damage. Without inflammation, infections and wounds would never heal.

However, sometimes inflammation can become self-perpetuating; more inflammation is created in response to the existing inflammation. This is known as chronic inflammation. It may be caused by overactive immune system reactions, non-degradable pathogens and infections with some viruses. It also occurs with autoimmune diseases such as Crohn’s Disease, rheumatoid arthritis and in heart disease, diabetes or stroke.

So, what do emulsifiers do to the gut?

Emulsifiers are natural or chemical substances that consist of a “water-loving” end and an “oil-loving” end. They’re commonly used to combine ingredients that normally don’t mix together, such as oil and water.

It would be impossible, for instance, to make mayonnaise without using lecithin (found in egg yolk) as an emulsifier to evenly mix the oil and lemon juice together. 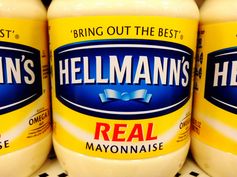 Without emulsifiers,the ingredients in mayonnaise wouldn’t bind together. Mike Mozart/flickr, CC BY

Emulsifiers are added to bread, salad dressings, sauces, puddings, margarine and ice-cream, to makes it smoother and more resistant to melting.

The mice showed a change in the species of bacteria growing in their gut when compared to controls, with reduced numbers of bacteria considered beneficial to health, and increased levels of inflammation-promoting microbes.

The mucus layer that usually shields intestinal cells from invading pathogens had become colonized with mucus-eating bacteria in the emulsifier-fed mice, resulting in a thinner mucus barrier.

In comparison to control mice, previously healthy mice that were fed emulsifiers had low-level gastrointestinal inflammation, ate more food and gained more weight (especially body fat), had higher blood sugar levels and were resistant to the action of insulin.

The condition of the mice resembles a human condition that is increasing in prevalence called the metabolic syndrome.

People with the metabolic syndrome have excessive fat around their abdomen, high blood pressure, increased levels of “bad” LDL-cholesterol and reduced levels of “good” HDL-cholesterol, and poor control of blood sugar. It also increases the risk of chronic diseases such as type 2 diabetes, heart disease and stroke.

The germ-free mice subsequently developed mild inflammation and symptoms of the metabolic syndrome. When emulsifiers were fed to mice that were genetically prone to develop colitis (inflammation of the colon), these mice developed severe colitis. This may have future implications for sufferers of inflammatory bowel disease.

The authors point out that:

the last half-century has witnessed a steady increase in the consumption of food additives, many of which have not been carefully tested as they were given “generally regarded as safe” status at the time that government entities charged with regulating food safety were created and/or expanded.

Don’t throw out the mayonnaise just yet…

The United States Food and Drug Administration has approved polysorbate-80 for use in select foods up to 1%, while E466 has not been extensively studied but is deemed “generally regarded as safe” and is used in various foods at up to 2.0%.

Food Standards Australia New Zealand has approved polysorbate-80 (code number 433 in Australia) and E466 for use in foods with “good manufacturing practice” with no maximum levels.

The study findings highlight the need for regulatory bodies to ensure that food additives are initially tested for safety and continue to undergo long-term monitoring for their effects on chronic health conditions. But it’s too early to remove all emulsifiers from our diets in order to prevent developing the metabolic syndrome.

Dietary emulsifiers clearly affect the metabolic health of mice, but it’s unknown whether emulsifiers impact human health. Humans have been consuming natural emulsifiers for thousands of years, while mice don’t eat emulsifiers in their normal diet.

We also need to determine the quantities that humans are likely to consume over long time periods and their possible metabolic consequences. For the main experiments in the study, the mice were fed concentrations of emulsifiers greater than the average daily human intake.

Multiple factors contribute to the development of the metabolic syndrome. The over-consumption of kilojoules from highly processed diets and insufficient physical activity remain the primary culprits and should be addressed in the first instance.

However, these studies drive home the importance of cooking using fresh ingredients and avoiding or minimizing the use of processed foods. Everyone should start reading food ingredient labels and become more aware of what they are really feeding their family.