Free Community College Is Good For Students But Not America
By The Conversation | January 18th 2015 05:30 AM | Print | E-mail 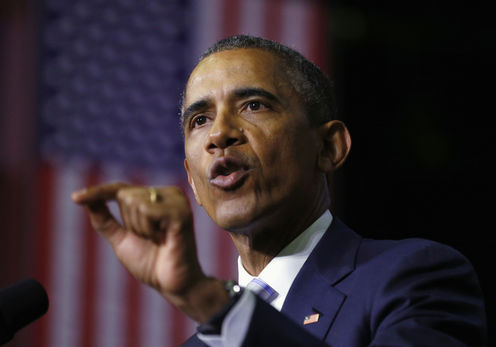 Can the promise of free community college be delivered? President Obama at Pellissippi State College in Knoxville, TN Kevin Lamarque/Reuters

Last week, President Barack Obama announced a proposal to guarantee that students could attend a community college for free for their first two years. The announcement was one in a series of previews of domestic policy proposals he is planning to include in his State of the Union speech later this month.

The important question to ask is, will the president’s proposal help achieve his goal of returning the nation to global prominence in post-secondary education?

The difference between Obama and Clinton proposals

Guaranteeing two years of free community college is not a new idea.

Former President Bill Clinton proposed the same thing approximately two decades ago. What is different is how the guarantee works. Under Clinton, students’ tuition and fees would have been paid for by a series of tax credits and deductions.

Rather than utilizing the tax code, President Obama’s plan, which he calls “America’s College Promise,” would provide a grant to cover the tuition of an in-state community college, which currently averages $3,800 per year across the nation.

The president should be congratulated for attempting to tackle the problems of college affordability and access. Both of these have grabbed the attention of the media, parents and students in recent years. The president has talked about the issues before – this is one of the few bold, concrete ideas of how to address them.

America’s College Promise at face value looks like an important initiative. At the same, there are major problems with what the president has proposed.

It is difficult to understand exactly how the program will work, because the White House has yet to release many details.

One of the things we do know is that the program is potentially very expensive. While the White House estimates the cost at $60 billion over ten years, an estimate by David Leonhardt of The New York Times puts the annual cost at $15 billion.

Whatever the amount, the president will have a hard time selling a fiscally conservative Congress on the need for new spending on the government’s student aid programs. And if this is not going to be a new stream of funding, it leads one to question where the money will come from.

Will it come from existing funding for Pell Grants, the primary federal grant program for low- and moderate-income students? Or from the Department of Education’s Federal Direct Loan Program? These are important questions to ask to determine whether America’s College Promise is a wiser use of the money than other options.

The president’s proposal also requires states to kick in 25 percent of the cost for each student. It is unclear whether the states – most of which cut spending on higher education during the recession – will take on this commitment.

Another problem with the proposal is that it is open to anyone, no matter what the financial circumstances are of the student or her family.

Is a universal benefit the way to go?

I understand the appeal of offering a universal benefit like this – it helps build political support for the program. There are also benefits to publicizing the idea of offering the first two years of community college for free to all students. This can help lessen the “sticker shock” that affects many low-income students who want to go to college, but who think that it is too expensive and do not have good information about financial aid.

However, offering this benefit to all students may be a largely inefficient use of the money if the president’s ultimate goal is to increase college access and degree attainment.

Providing public subsidy to some students who would enroll in a community college even without the government assistance is unlikely to have much impact on their college-going behavior. The money would be more effectively spent targeting students who truly have financial need, and whose behavior can be influenced through the subsidy.

The country may, in fact, be better off if the $3,800 grant could be used for students attending 4-year universities, as well as community colleges.

There is definitive research showing that students who earn bachelor’s degrees receive much larger economic returns, on average, than do those earning associates degrees. And while some community colleges do a good job of preparing students for transfer to 4-year institutions, the research also shows that most students who start their post-secondary career at a community college will never earn a bachelor’s degree.

In other words, the country may benefit more if students could use these subsidies at four-year universities, as well as community colleges.

While the president’s intentions are good, there are still many unknown pieces of his proposal that still need to be fleshed out. Until they are determined and the concerns raised here are addressed, President Obama’s good intentions may be foiled by a poorly-designed program.

Donald E. Heller , Dean, College of Education, at Michigan State University, has in the past received funding for research from government and foundation sponsors.