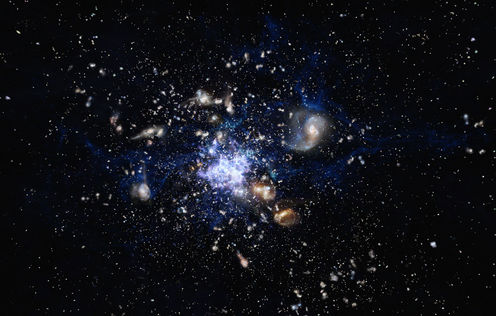 An artist's impression of a galactic protocluster forming in the early universe. Credit: European Southern Observatory, CC BY

Clusters of galaxies have back-stories worthy of a Hollywood blockbuster: their existences are marked by violence, death and birth, arising after extragalactic pile-ups where groups of galaxies crashed into each other.

But clusters in our patch of the universe are pretty unexciting places, filled with old massive galaxies and low star-formation rates. A mystery that’s hounded astronomers is how – and when – did clusters manage to grow so many massive galaxies?

In research published today in Astronomy&Astrophysics, an international team (including me) solved part of that puzzle. Galaxies growing fastest in the relatively young Spiderweb Galaxy cluster lie on its outskirts – not in the center. This is contrary to expectation and tells us a lot about the distribution of gas in the merging cluster.

Using the Large Apex Bolometer Camera (LABOCA) on the Atacama Pathfinder Experiment (APEX) telescope in Chile, we found the density of star formation in the Spiderweb Galaxy cluster is 10,000 times greater than that normally found in the early universe.

We then calculated the total star formation rate within the cluster and found it to be orders of magnitude higher than we would expect from a random region of the early universe.

In other words, we observed this protocluster at a key point in its history – when it was rapidly building up its galaxies.

This fascinating protocluster – formally named PKS 1138-262 – is known as the Spiderweb Galaxy cluster due to the large number of galaxies looking like “flies” caught in its gravitational web.

It arose from an extra-galactic collision of smaller clusters, and out of the wreckage formed one of the most massive, turbulent and gas-rich clusters known in the universe.

This collision triggered the rapid growth of an extremely massive black hole in the Spiderweb Galaxy at the center of the protocluster. The black hole acted like a lighthouse, with powerful radio jets marking the presence of this infant cluster to astronomers (this is also why such galaxies are called radio galaxies). APEX view of the region around the Spiderweb Galaxy. European Southern Observatory, CC BY

So did this collision also trigger intense star formation?

The early universe is an inherently dusty place which makes it difficult to study – a bit like looking through a bin liner – and hampers our ability to see what is going in the Spiderweb Galaxy cluster. While astronomers have been studying the Spiderweb Galaxy and its surrounding environment for 20 years, they have traditionally struggled to measure its star formation rate.

The LABOCA instrument provided a clear view though this dust by observing at millimeter wavelengths. It opened the window onto the surrounding galaxies in the cluster through which my collaborators and I could accurately measure, for the first time, the exceptional star formation rate within the Spiderweb Galaxy cluster.

The most intense star-forming region of the universe

As I described above, we found the cluster to be forming stars at a rate 10,000 that normally observed in the early universe – a rate unprecedented anywhere in the universe.

The merger of two smaller clusters to make the Spiderweb Galaxy cluster stirred up gas and dust, and provided the powerful shocks and gravitational tidal forces to stimulate new star formation.

The other intriguing possibility is that the radio galaxy lies on the outskirts of the cluster instead, unlike in the local universe where radio galaxies are found in the centers of clusters. The Spiderweb Galaxy and its surroundings. European Southern Observatory/Flickr, CC BY

The future of radio surveys

The initial radio observations were key to the discovery of this unique protocluster. To fill out the picture of protoclusters in the early universe my colleagues and I will exploit the latest technology in radio astronomy – namely the Murchison Widefield Array (MWA) and Australian Square Kilometre Array Pathfinder (ASKAP).

Working in tandem in the Western Australian outback, these telescopes, with their large, technology-enhanced fields of view, will revolutionize our view of the radio universe.

These telescopes will help us find many more protoclusters in the early universe and build upon our knowledge of the build-up of galaxies within massive clusters.