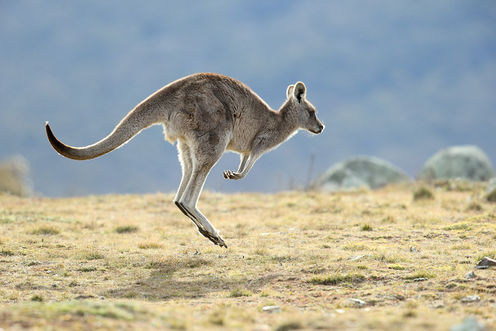 Extinct giant kangaroos may have been built more for walking, rather than hopping like today’s kangaroos, especially when moving slowly.

These sthenurine kangaroos existed until around 30,000 years ago, diverging from a common (hopping) ancestor with the kangaroo/ wallaby group around 13 million years ago, and leaving no descendants. Our research, published today in PLOS ONE, demonstrates that they may have employed a kind of locomotion not seen in living kangaroos: bipedal walking using one leg at a time.

Sthenurines have been known about for a long time – they were first described in the late 19th century by naturalist Richard Owen at the British Museum of Natural History. Our main knowledge of these kangaroos comes from the abundant fossil sites of the Australian Pleistocene era (the past couple of million years).

These 'roos were made for walking Sthenurines also had short faces and powerful jaws. Their teeth show that they browsed for a range of food in contrast to the long-faced modern large kangaroos, which eat mainly grass.

They had specialized hands with two long delicate fingers and a specialized shoulder girdle. This indicates they used their forelimbs to reach up and gather vegetation.

I first became interested in sthenurine kangaroos when I saw a skeleton in a museum in Australia and it made me wonder if these animals could hop like modern kangaroos.

All sthenurines have a back that is relatively short with large interlocking vertebrae in the lumbar region – in contrast to the longer and flexible back of modern kangaroos – and this individual appeared to be arthritic in this area.

So we set out to measure aspects of the anatomy of the limb bones of a diversity of modern and fossil kangaroos, taking up to 101 measurements on each individual.

We showed that, despite their long legs, in many ways sthenurines were more like tree kangaroos (which rarely hop) than the terrestrial hoppers. They appeared to be constructed for power rather than for speed. But we needed more data on a bigger diversity of both living and fossil kangaroos. Although there was some good material at the American Museum of Natural History in New York, much of the data collection had to be done on trips to Australia while visiting family or doing other research.

The measurements we collected over the years showed that sthenurines were indeed unlike other kangaroos in many ways.

This was especially in the pelvis (more area for the attachment of the gluteal muscles that help us balance while standing on one leg), and in the ankle joint (more strongly braced against torsion, such as those of hoofed mammals), and they also had relatively bigger hip and knee joints.

They also lacked the specialized features of large modern kangaroos that relate to their fast hopping locomotion, such as a long ischium (posterior pelvis), to give a powerful advantage to muscles retracing the legs.

All of the differences could be explained by the hypothesis that sthenurines were bearing their weight on one leg at a time, walking bipedally.

Putting the pieces together

Studies on the physiology of hopping locomotion provided us with an understanding of how sthenurines may have evolved. As well as hopping being difficult for large animals (modern large kangaroos being close to the limit in terms of strain on the Achilles tendon), it is also bio-mechanically impossible to hop very slowly. Modern kangaroos use their tail as a fifth leg. Flickr/Carmen Eisbar, CC BY-NC-SA

Modern kangaroos use a different type of slow gait, a pentapedal (five-footed) walk, using their tail as a fifth limb to propel their hind legs around their fore legs. This is way that large kangaroos move most of the time. But it requires a flexible back and hands that can support the body weight – both features lacking in sthenurines with their stiff backs and specialized hands.

So sthenurines would not have been able to move in this fashion, and as hopping very slowly is physiologically impossible, they must have used some other type of locomotion at slow speeds.

This may be how their bipedal walking originally evolved, and it may have been this new type of locomotion that enabled them to evolve into body sizes much larger than modern kangaroos, where hopping would be difficult if not impossible.

Previous workers have not considered that sthenurines might have been different in their locomotion from modern kangaroos. But extinct animals may not have precise analogs amongst modern forms. Indeed, how would scientists interpret the ecology and behavior of a giraffe or an elephant if these were only known from fossils?

The long legs of sthenurines reflect their common ancestry with other kangaroos, and while smaller sthenurines undoubtedly employed some hopping, their legs were clearly specialized in a fashion different to that of modern large kangaroos, and apparently also adapted for walking.

Our hypothesis explains the differences in anatomy between sthenurines and other kangaroos, and shows how their early adoption of a specialized browsing diet would require a new type of slow locomotion.