Renewable electricity has nearly trebled under this government.

Amid the climate of mistrust about claims made by politicians that tends to accompany election campaigns, it is reassuring to report that the evidence supports the minister’s statement. 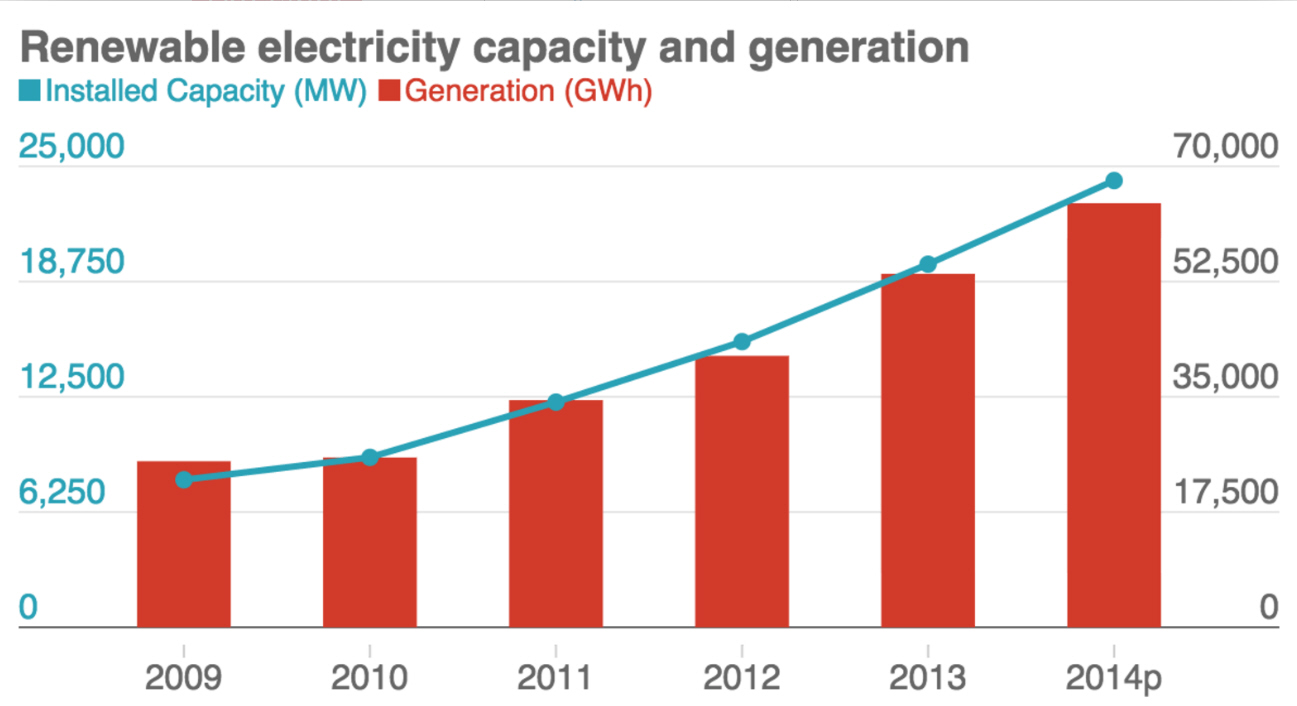 Although most of this involves generating electricity by combustion, which yields CO2 as a byproduct in the same way as fossil fuel combustion, these organic materials decompose naturally to produce CO2 and other greenhouse gases anyway, so using them to generate electricity has little effect on net greenhouse gas emissions.

The main growth area was wind, which accounts for about half of Britain’s renewable electricity, followed by photovoltaic and plant biomass.

Provisional data shows that renewables contributed a record 19.2% of electricity generation in 2014.

This increase in renewable electricity can be attributed in part to the Renewables Obligation set up by the previous Labour government in 2002, which obliged electricity supply companies to source an increasing proportion of their electricity from renewable sources. However, the Contracts for Difference feed-in tariff system introduced by the coalition for large-scale energy generation – which established a set price that is high enough to enable investors to make a profit – is probably responsible for increasing the rate of growth.

Expert studies have shown that feed-in tariffs are more effective than quota systems in encouraging investment in renewable electricity.

The flaw in the coalition’s strategy is that while in other countries, electricity supply companies are obliged to buy all the electricity generated by renewable sources at the feed-in tariff price, which is higher than the market price, in Britain, supply companies buy at the market price and the government pays the difference. As a consequence, expansion of renewable electricity is limited not only by investors’ willingness to invest and planning issues, but also by budgetary constraints.

As spending cuts are the order of the day, this means that we cannot be sure that the current rate of expansion will be sustained.

Ed Davey’s claim that renewable electricity has almost trebled during the coalition’s term of office is accurate, but flaws in Britain’s feed-in tariff system mean that further expansion may be limited.

The coalition certainly deserves some credit for its record on creating new sources of renewable electricity, and it is also true that the fear of electoral unpopularity regarding high energy bills has hampered the efficacy of its achievements. These could have been even higher if the energy companies had been required to purchase higher tariff renewable energy from distributed sources.

However, when energy for heating and transport (which still depends primarily on fossil fuels) is taken into account, renewables represent only 5% of energy supply in the UK, according to the 2014 Digest of UK Energy Statistics. There is widespread acceptance, including by the UK government, that greenhouse gas emissions need to be reduced to keep global temperatures from rising beyond 2°C.

The Centre for Alternative Technology’s report Zero Carbon Britain suggests that it is helpful to think the world has a finite amount of greenhouse gases it can emit to keep within the 2°C threshold. This is known as the emissions budget. The report predicts the UK’s share of the global emissions budget (offering a 75% chance of keeping below 2°C) at about 10,000 MtCO2e between now and 2050. At the current emission rate the country will produce 16,000 MtCO2e by the middle of the century.

Voters would do well to avoid the rhetoric over renewable electricity and ask which party’s policies are most likely to decarbonize all parts of the country’s energy budget, and how quickly they say they can do this. – Erik Bichard