Every year, almost without thinking about it, we incorporate certain plant species into our Christmas celebrations. The most obvious is the Christmas tree, linked historically in England to Prince Albert – but its use in British homes goes back to at least 1761 when Charlotte wife of George III put up a tree at the royal court. (It’s probably worth noting here that the first artificial-brush Christmas tree was produced using the same machinery that was originally designed to produce toilet brushes.)

Three other plants are intimately associated with Christmas: holly, ivy and mistletoe – and in all cases their ecology is closely linked to their cultural uses.

Of all the trees that are in the wood

Holly, like ivy and mistletoe, is a winter green and the bringing of green vegetation into the home is closely linked to rebirth both of spring and of Christ. It is the holly that most closely bears the crown – its spiny leaves and red berries link to Jesus' crown of thorns. But such a link does not explain why holly is linked to Christmas rather than Easter.


King’s College Choir: The Holly and the Ivy.

Holly was an important element in deer parks and old hunting estates – and the name holly still survives in modern place names such as Hollins, Holm Hodder, Hollyoaks and Hollywood – and were important for winter food. In the New Forest, in southern England, holly is still cut down as browse for the ponies.

The spiny dense canopy of holly also meant that it was useful as protection. It was sometimes planted next to saplings of valuable tree species to provide some protection from grazing animals and it is not unusual to see holly growing next to oaks and other trees, either from deliberate planting or a result of seeds being deposited by birds roosting on the branches above.

Holly has also been thought to protect the home – the holly you put around the door acting as flypaper for fairies, trapping any evil spirits who try to enter.

Holly and Ivy are often linked together at Christmas; this goes back much further, to the idea of the holly (male) and ivy (female) being burnt together at the pagan festival of Beltane.

Ivy, like holly, is an important evergreen edible plant species in UK woodland. One of only five woody climbers, like mistletoe it can form dense growths in canopies that can cause harm to the host. As with mistletoe it is linked with both Christmas and romance. Ivy is unusual among these species in being also associated with death and melancholy as well as rebirth.

European mistletoe Viscum album is a partial parasite; it draws some nutrition from the host tree but also makes its own energy through photosynthesis. It is unusual in being a parasitic species that was deliberately spread by humans as it was thought to encourage fruiting in orchard trees. Pliny believed that mistletoe seeds had to be eaten by birds to germinate, indeed the name mistletoe means dung on a stick.

Mistletoe is most often associated with love, romance, courtship and the snog at the Christmas party. Its early associations are rather more sexual and when you look at its distinctive shape it is fairly easy to see why. Mistletoe has pairs of woody short stems coming off at right angles with two or more whitish ball-like berries at the junction of the stems. The berries when squashed secrete a white sticky liquid. 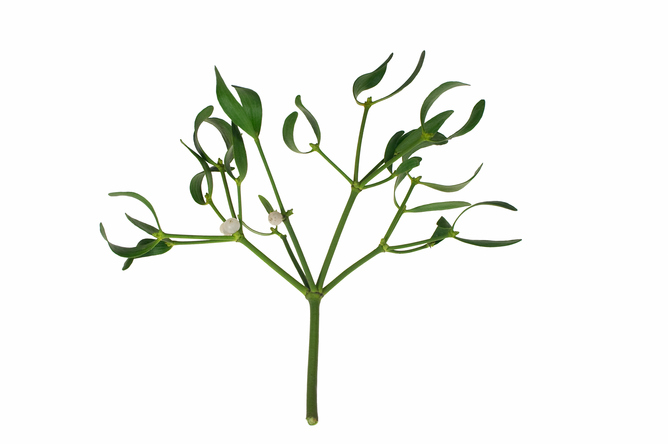 Most people associate mistletoe with orchards, but can grow on a wider range of tree species provided they have a fairly soft bark. Apple is the most common host species, but it is also found on limes, hawthorn and poplar. The 1970 and 1990 Botanical Society of the Britain and Ireland (BSBI) indicate that the decline in number of orchards and changes in management has had an impact on mistletoe abundance. More recent surveys indicate possible range expansion in the east of England. There is a need for more survey work and you can take part by submitting your records of mistletoe here.

Mistletoe grows in the canopy of trees, with no roots or link to the earth and it remains green in winter when the rest of the tree has died, With such unearthly vitality has easy to understand why mistletoe has been associated with magical properties. It is one of the few pre-Christian examples of plant magic to survive. Many believe mistletoe and poinsettias to be poisonous. Southern European varieties contain some toxins but UK varieties are less toxic and there are no known recent incidents of poisoning. It is strange that for a plant perceived to be toxic to have confectionary named after it. The Celts believed that mistletoe was an all-healing plant – and it has now been discovered to contain anti-tumor compounds.

So when you put up your wreaths of holly and ivy and take a kiss under the mistletoe remember you are taking part in some historic and less historic traditions and celebrate the natural history that is part of Christmas.

By Peter Glaves, Enterprise Fellow, Northumbria University, Newcastle. This article was originally published on The Conversation. Read the original article.