How Pasteur Made Our Modern Food Bonanza Possible
By The Conversation | January 5th 2015 05:00 AM | Print | E-mail 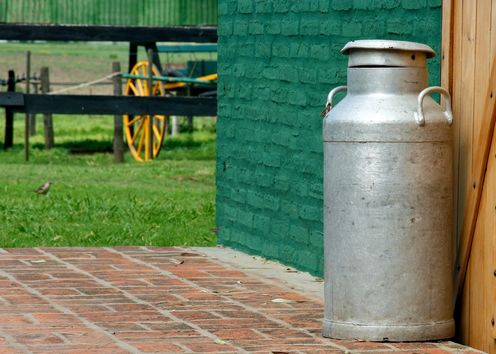 Pasteurization been instrumental in reducing morbidity and mortality from the consumption of bacteria-ridden food and drink. Doug Wheller/Flickr, CC BY-NC-SA

By James Bradley, University of Melbourne

The death of a three-year-old child caused by drinking unpasteurized milk late last year invited much commentary about food safety and regulation. But little has been said about the man who gave his name to the process that makes dairy products, and many other foods, safe for mass production: Louis Pasteur (1822-1895).

While the natural food movement insists sterilization techniques destroy many nutritional benefits, there can be no doubt these same techniques have been instrumental in reducing morbidity and mortality from the consumption of bacteria-ridden food and drink. Of these, pasteurization is one of the most important. It involves heating food or drink to a temperature where most harmful bacteria are eradicated. It’s particularly associated with milk, but is used across a wide range of products.

Most people probably don’t think about who or what lies behind pasteurization. But it’s definitely a question worth asking because it emerged from one of the most important eras in the history of science. A time when our understanding of both life and disease was irrevocably changed.

Pasteurization, of course, commemorates one of the greatest members of science’s pantheon, the French microbiologist Louis Pasteur. But while Pasteur was responsible for the theory that underlay the process, it was only towards the end of his life that technology was developed to implement his principles on an industrial scale.

Pasteur was born of humble origins but rose to become one France’s most celebrated heroes. As one Pasteur critic said a few years before Pasteur’s death:

In France, one can be an anarchist or a nihilist, but not an anti-Pastorian. A simple question of science has been made into a question of patriotism. Louis Pasteur identified the role of germs in disease and created a way of eradicating them from food and drink. Sanofi Pasteur/Flickr, CC BY-NC-ND

But what was this “simple question of science”? Today, Pasteur is mainly remembered for the discoveries that did so much establish the germ theory of disease, which posits that many diseases are caused by bacteria. We think, in particular, of his work on anthrax and rabies, which included the development of vaccines for both.

We might remember his ferocious competition with the German microbiologist Robert Koch (1843-1910), which led to so many pathogens being identified. We see the continued glory of the Institut Pasteur, which has continued the work of the great man for the benefit of humanity.

Pasteurization was itself the by-product of discoveries that led to the germ theory of disease. Pasteur had started his scientific career in chemistry, working in the field of crystallography. From there, his interests broadened to explore the process of fermentation, particularly in wine and beer, industries that were critical to France’s prosperity.

Pasteur was a deeply patriotic and conservative man. He was a supporter, no less, of Louis-Napoleon III (1808-1873), who had grabbed power from the Second French Republic in 1851. While not overly religious, he was a supporter of the Catholic Church, and affirmed belief in a God-Creator.

What’s more, like many of his scientific contemporaries in France, he was hostile to the notion of evolution, even after the publication of Charles Darwin’s On the Origin of Species. In particular, he was against the notion of spontaneous generation, the idea that life could organize itself from inert matter with no intervention from a supernatural force.

Spontaneous generation had been at the heart of Jean-Baptiste Lamarck’s pre-Darwinian theory of evolution. It was associated with materialism – the belief that life can be explained by natural forces – and atheism. During the late 1850s, Pasteur set out to explode the belief in spontaneous generation. He aimed to do it through an assault on the experimental methods of Félix-Archimède Pouchet (1800-1872), who had appeared to demonstrate that life could be created from inorganic materials.

Using a series of ingenious and exhaustive experiments, including the use of his famous swan-necked flasks, Pasteur was able to demonstrate that Pouchet’s spontaneous generation was actually the result of microbial contamination of the materials used in his experiments.

By 1864, Pasteur had not only been able to demonstrate that life could only emerge from life, but also that fermentation was a biological and not chemical process. A by-product of this research demonstrated that subjecting wine, beer, or milk to short burst of heat could mostly destroy the bacteria that caused them to sour.

This was nothing less than the birth of pasteurization. But it would be many years before the technique was developed and implemented on the industrial scale required to make diary products safe.

At the time, not much attention was paid to food hygiene. Meat products might be infected with anthrax, and diary products with a variety of bacteria. Milk itself often contained the bacilli of bovine tuberculosis, or Mycobacterium tuberculosis. And because the germ theory of disease had not been fully accepted, there was little impetus for state-driven intervention, even though the technology for industrial-scale pasteurization had existed since the 1880s. Indeed, even as late as 1900, there were many within the medical profession who argued the germs cholera vibrio, tuberculosis bacillus, or typhoid-causing bacteria, were not, in themselves, enough to cause someone to fall ill.

The discovery that some people might be asymptomatic and, therefore seemingly healthy carriers of these pathogens, didn’t help the cause.

In 1908, Chicago became the first municipality to demand compulsory pasteurization, while Ontario, in 1938, demanded milk be pasteurized throughout the province. So powerful was the argument provided by the germ theory of disease, that more often than not it was consumer choice that drove pasteurization, rather than state legislation. From the 1920s and 1930s, many dairies across the developed world instituted the practice voluntarily as the pro-pasteurization lobby gained ground.

In some places, unpasteurized milk has never banned. Unlike Australia, where unpasteurized milk must be labeled a cosmetic product, in England and Wales it remains a matter of choice. But pasteurization remains one of Pasteur’s greatest legacies, even if it sprung from the great man’s belief in an interventionist God, a dictatorial emperor, and the greater glory of France.

James Bradley, Lecturer in History of Medicine/Life Science at University of Melbourne, does not work for, consult to, own shares in or receive funding from any company or organisation that would benefit from this article, and has no relevant affiliations.