Hank Campbell
Raw dairy is diarrhea and vomiting waiting to happen, there is a reason heat pasteurization is credited with saving a billion lives, but a company in Australia has used a legal loophole to milk raw believers into buying their un-pasteurized product.

They can do a wink-wink at the raw milk market while noting it can stay on shelves for 6 weeks because it's not raw, it's still processed.  It is just a different process than heat pasteurization. Instead of embracing the French scientist Louis Pasteur, they embrace the French scientist Blaise Pascal, who did fundamental work on fluid flow 200 years before Pasteur saved the French wine industry. It is now known that by applying pressure of 50,000 pounds per square inch you can kill most microbes in foods. Pascalization - high hydrostatic pressure - has been used in commercial food since 1990, to keep goods on shelves longer, but was even successfully done on milk starting in the late 1800s.

It was just not as good as heat pasteurization, in that it didn't kill everything, so it wasn't adopted. A 2002 experiment at even 16,000 times normal air pressure showed it is not killing microbes the way pasteurization will, but from an epidemiological point of view that is making the perfect the enemy of the good, like saying if you can detect BPA in a person it must be harmful, when it is 1/20,000th the endocrine disruption of an actual endocrine disruptor, like estrogen. it's still killing so much that the milk is going to be as safe as heat-pasteurized milk in real-world scenarios. 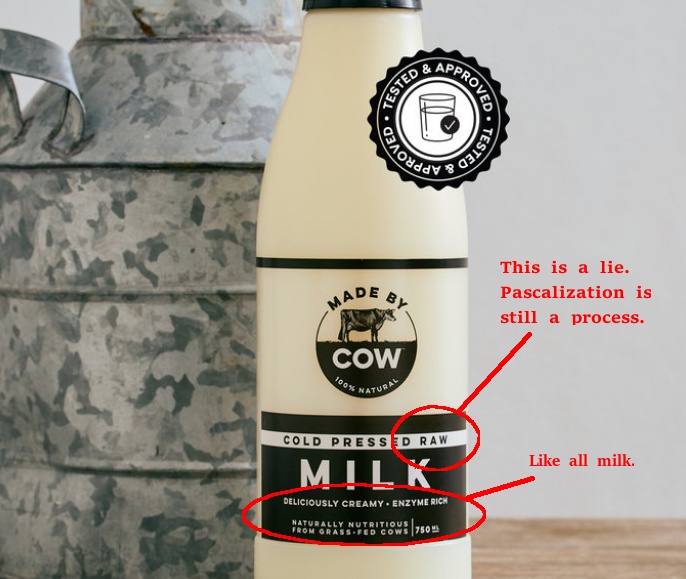 I drank raw milk as a kid, and I worked on an organic farm as a kid. I just don't like people being duped, and this is a lie.

Will this be successful? I believe so. Though it likely tastes slightly different than raw milk, just as heat pasteurized milk does, cold pascalized milk is really selling to the nocebo market - those who believe heat pasteurization is bad. Everyone has heard of a placebo - an inert pill our brains think is beneficial - and a nocebo is that concept in a different phase. People feel healthier if they are told something is removed. In this case heat pasteurization that has prevented a lot of illnesses. But like organic food simply using different pesticides in their process, this is simply a different process to kill bacteria. It is still a process, it is not raw milk.

To the science and health community the techniques are irrelevant, the goal is preventing the foodborne illnesses that are rampant in the raw milk space. Made by Cow’s pressure treatment process instead of heating is just a marketing detail.

When FDA created the organic label and said it is just a marketing distinction, there is no health benefit, the Australian government stated plainly plainly this is not raw milk so now health detriment - while the company suggests it is raw, with lingo such as 'bottled straight from the cow' and 'no pasteurization' while making Raw part of a proper name. I can sell Vegan Beef if I make it a proper name. 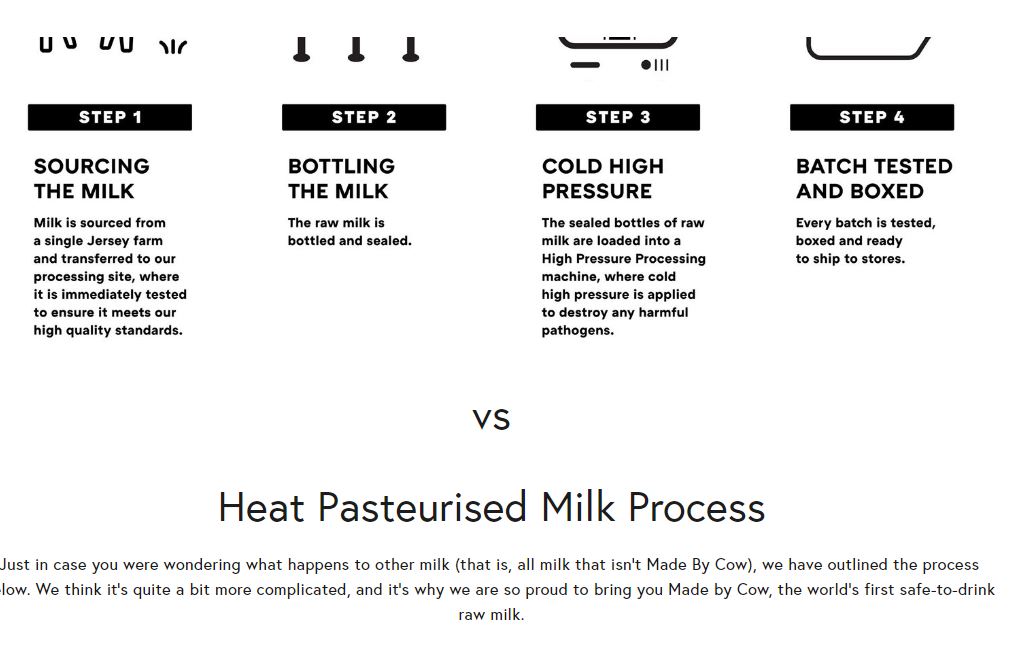 They cleverly compare their process to heat pasteurization, which will ward off government officials who have deemed it is still pasteurization, just not heated. Using this marketing technique, YooHoo can be termed raw milk. Any milk can be called raw milk, if it just uses a process other than heat pasteurization to turn raw milk into safe milk. Processed is not raw.

It is not raw, it is being pasteurized according to scientists in the New South Wales Food Authority who signed off on approving it for sale: "It is a highly processed product using a method known as High Pressure Processing (HPP) to process the milk. HPP is the use of high hydrostatic pressure to destroy harmful microorganisms in food...The Food Standards Code requires milk to be pasteurised — either by heat or by other methods that achieve an equivalent food safety outcome. The high pressure processing pasteurises the milk, but without using heat –- it is not raw milk."

The wealthy elites who overwhelmingly buy organic food and supplements aren't going to read any of that and the company knows they can can afford it, so they are charging a premium. But at $8 a gallon it is competitive with a regular old "organic" label on American milk.
Science 2.0
More Articles All Articles
About