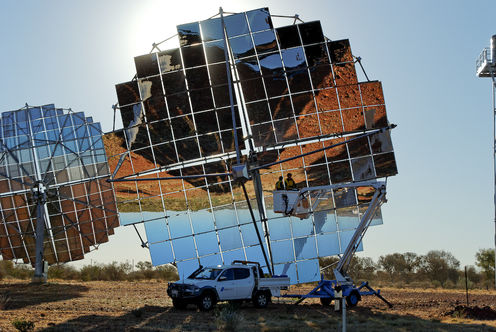 There are numerous methods for maintaining electricity supply when renewables are in the grid. Credit: Johan Douma/Flickr, CC BY-NC-SA

By Anthony Vassallo, University of Sydney

The recent review of the Australian Renewable Energy Target has once again raised the issue of the “unreliability” of some renewable power sources such as wind and solar power.

Their variability, which arises from the weather or daily and seasonal cycles, leads some to conclude that they will only ever be able to supply a minority fraction of Australia’s electricity.

But for the most part we have the technology available to ensure a steady supply of power, and where we don’t, technology is rapidly advancing.

South Australia is at the forefront of integrating renewables into the existing grid. With more installed wind than any other state (almost 1,500 megawatts), wind now provides on average 25% of its annual electricity production. On recent occasions it provided 100% of the state’s needs and even exported 487 megawatts of power in June this year.

All electricity grids that use alternating current (and that is almost universal) require that the power generated exactly meets the power needed.

An analogy is driving your car. On a road, a constant speed is achieved using a constant throttle — if you start to drive up a hill and you want to keep the speed constant, then you need to increase the throttle otherwise the car will slow down, and as you go over the crest and down the other side the throttle needs to be released otherwise your speed will increase.

The same thing is required in electricity grids, except the need to keep the “speed” constant is much more critical. If extra generation is present because of greater wind speed or more sunshine, then less power from other sources is usually required. On the surface, this might appear to be a significant barrier to continued strong growth in PV and wind in Australia. Our national electricity grid (mostly on the eastern and southern states) is the result of decades of growth, largely built on legacy operation — large, remote, baseload coal power plants that need to operate continuously.

This resulted in the three tier generation comprising baseload, intermediate and peaking.

Baseload is the term used to describe the large coal-fired power plants that were designed to provide cheap, continuous power. In fact because of their size and design it was not feasible to greatly reduce their output overnight, so it was necessary to provide an incentive to consumers to use power at night to keep them running efficiently.

This was the “off-peak” hot water and other time independent loads that were encouraged through very low tariffs. Aluminium smelters for example, were able to negotiate very low tariffs by providing a reliable “baseload”. The recent closure of some of these smelters is a significant issue for some baseload generators.

As electricity demand became more peaky, with increasing uptake of air conditioning for example, and other appliances, extra generation was required for mornings and evenings — the intermediate and peaking plant.

This plant may only need to operate for a few hours a day, and because of the flexibility required, gas was the fuel of choice, as gas turbines can be turned up or down in output much faster than coal plant. As these plants only operate when demand is high, the higher cost of gas can be justified.

There are a number of alternatives to managing this variability, such as more accurate renewable generation forecasting and demand response (i.e. specific actions to reduce customer loads, such as payments for reducing consumption).

Wind power generation can now be forecast with useful accuracy. In Australia, wind forecasting is now better than 10% error for 40 hours ahead, and better than 4% error for 1 hour forecast. Hydro is one of the most widely-used methods of storing energy for when it’s needed. rodtuk/Flickr

A different way to match supply and demand is to use energy storage.

Energy storage has been described as the missing link - even the Holy Grail - of electricity grids. With enough storage, a high degree of variability in generation and use can be easily managed.

Think of the water supply to your home. The great variability in use (time of day) and supply (rainfall) is managed through water storage in the pipes and in reservoirs.

Hydroelectric energy storage is the most widely used energy storage technology used today in power systems. During times of high demand, water is released and drives turbogenerators that can provide huge amounts of power. Overnight when electricity demand is low, water can be pumped from a low reservoir to the high reservoir in readiness for the next peak.

However hydroelectric energy storage requires water, an upper and lower reservoir and land. It is usually located away from the big users of energy — the cities — and has some challenging sustainability issues in countries like Australia.

A more ideal solution perhaps is to distribute the storage in and around the users, particularly homes, businesses and industry. This storage can still be charged from the grid, if necessary, but can provide local power when needed, such as during peak times. This reduces the peak load on the transmission and distribution system, which has been a major component of recent rises in electricity prices.

Widespread solar PV, especially on homes, may provide the catalyst for uptake of household and small business battery energy storage.

Solar PV is a wonderful, clean, quiet and increasingly inexpensive power source. It is expected that PV prices will continue to decrease as manufacturing scale and research provide higher efficiency and lower cost materials.

PV uptake in Australia has been strong, with over one million households now having installed PV.

Our FutureGrid modeling shows that for many households selling excess solar power back to the retailer is a poor deal for the household. If the home’s electricity use has morning and evening peaks, with low use during the day it makes sense to store the excess so it can be used when charges are high, which is typically after sunset.

A combined PV and storage system could make a lot of sense for both homeowners and utilities, if the cost of storage was acceptable. Homeowners could store excess PV during the day for use at peak times, avoiding high tariffs, and utilities could benefit through less peaky demand and reduced need for augmentation.

Germany, a long time leader in PV installations, has recently introduced a subsidy for battery storage installed with PV. The subsidy is up to 30% of the system price, with 7,000 of these battery systems installed in 2013. This subsidy is to assist homeowners cover the battery costs.

Battery costs are still quite high, although in some cases they can be justified on the basis of time-of-use tariffs and household load profiles. However battery prices are certainly moving down as new technology and larger scale manufacturing is incorporated.

Will battery prices fall to the same extent that has happened with PV in the last five or so years? It’s difficult to predict, but many technologies use inherently low cost materials, and are capable of many thousands of cycles. The need and prospect of massive battery uptake is also driving a lot of research into new storage technologies.

The biggest factor is the roll out of electric vehicles. Both hybrid and pure EVs require high performance, long life batteries. There is intense competition for this market, and much of the technology will impact on stationary grid-connected applications.

There is also a strong overlap in stationary and mobile battery storage. With up to 80 kilowatt hours of storage being provided with some vehicles, there is the possibility that some fraction of this could also be used when the vehicle is parked.

EV batteries may also be used in a “second life” when their performance is no longer suitable for vehicle use, after e.g. eight or so years.

Anthony Vassallo, Delta Electricity Chair in Sustainable Energy Development at University of Sydney, receives funding from the ARC for a linkage project with a flow battery developer. He is a co-director for a company that helps advise potential users of energy storage on commercial systems.