How Vaccines Changed Our Perceptions Of Disease
By The Conversation | February 22nd 2015 10:01 AM | Print | E-mail 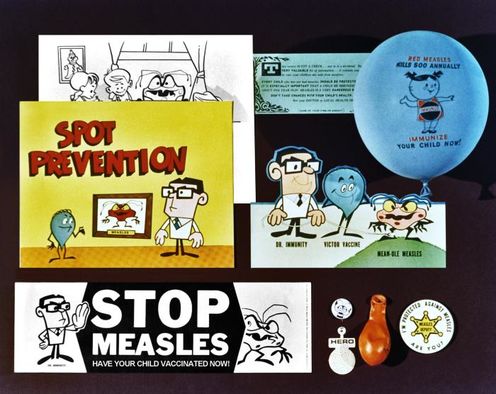 The news on the current measles outbreak contains plenty of reminders that measles causes brain damage, pneumonia, hearing loss and death. A few lone voices have spoken up to say measles isn’t that serious, including an Arizona doctor who said it’s “really just a fever and a rash” – and soon found himself under investigation by his state’s medical board.

Back in the 1960s, it wasn’t controversial to call measles benign. Though the disease killed about 400-500 Americans a year, it was considered a normal part of childhood. It was so common, in fact, that to this day, people born in the pre-measles vaccine era are considered immune. But the introduction of the measles vaccine, and efforts to promote it, fundamentally changed things. In the five decades since we’ve been immunizing against it, measles has become increasingly known as a deadly killer.

This transformation in perception, from relatively benign to a serious disease, isn’t unique to measles. As I have discovered in my research, it’s a pattern that’s been repeated over and over again in the modern history of immunization. This is not to say that measles is now considered a mild infection, or to suggest that risk from the virus, or other vaccine-preventable diseases, is overestimated. The point I want to argue is that the introduction of a vaccine reframes our perception of the disease it prevents.

Vaccines change our perception of risk

How does this happen? New vaccines simultaneously drive down the number of people getting the disease and increase our awareness of the risks of the disease.

Vaccines shine a spotlight on their target infections and, in time, those infections — no matter how “common” or relatively unimportant they may have seemed before — become known for their rare and serious complications and defined by the urgency of their prevention. This certainly happened to measles, whose first vaccine was uneventfully released in 1963.

At the time, many parents saw measles as a common and relatively harmless part of childhood – even though it infected three to four million people a year and caused roughly 48,000 hospitalizations annually. Many doctors felt as parents did, especially when comparing measles to such worrisome disease threats as smallpox and polio. Even the head of the Centers for Disease Control described measles as a disease “of only mild severity” which caused “infrequent complications.”

But the very development of the vaccine focused new scientific attention on the disease. Within a few years, scientists had compared measles to polio — the previous decade’s public health priority — and found it a much more serious threat to children’s health. Inspired by this finding, and frustrated by the public’s lack of enthusiasm for the vaccine, federal health officials launched a national campaign to publicize measles’ dangers.

The campaign officially spread the word, for the first time, that measles was “a serious disease that sometimes causes pneumonia, deafness, encephalitis and even death.” Public figures ranging from the Surgeon General to Ann Landers announced that measles could leave children blind, deaf and mentally impaired. And the campaign employed a poster child — disabled ten-year-old Kim Fisher — to illustrate the idea that measles immunization was necessary because “one death, one brain-damaged child, or even one child who needs hospitalization is one too many,” as one campaign supporter put it.

A new picture of measles emerges

As the campaign wore on, scientists continued to study the disease more closely than ever. Doctors began to report measles cases to health departments at unprecedented rates. And together, doctors and scientists began to pay more attention to the disease’s risks than even before. As a result, a new picture of the disease began to form: it appeared to cause more deaths than previously thought, brain damage in even mild cases, even harm to fetuses.

As the public continued to respond to the national campaign with “general apathy,” however, health officials redoubled their efforts to publicize measles’ “dramatic aspects,” and states began passing laws requiring the vaccine for schoolchildren. Within just over a decade, the country saw an all-time low of measles cases — and the disease had solidly acquired its new reputation as a deadly infection worthy of prevention at any cost. We used to think mumps and chickenpox were ‘mild’ too

In the decades that followed the introduction of the measles vaccine, vaccine makers and health officials duplicated this approach with one new vaccine after another.

Mumps, often the butt of jokes in its pre-vaccine days, was no laughing matter within a decade of its vaccine’s introduction in 1967. Hepatitis B was considered an obscure infection of little import to most Americans when its vaccine first came out in 1981, but soon after it evolved into a “cousin” of AIDS known for lurking in nail salons, piercing parlors and playgrounds.

Since the development of the chickenpox vaccine in the 1990s, the virus has been transformed in the public imagination from an innocuous if uncomfortable rite of childhood to a highly contagious infection that can cause pneumonia, sepsis and sometimes death. And in just the last decade, human papillomavirus (HPV) has morphed from a little-known sexually transmitted infection to a widely known cause of multiple forms of cancer. Each of these transformations in perception was triggered by a new vaccine.

Each new vaccine invited deliberation on how it should be used. That, in turn, focused increased scientific attention on the disease. Often, as federal health officials and other scientists accumulated new information about the disease’s risks and complications, the vaccine maker did its part to market its vaccine. As talk of each disease and its more dramatic aspects spread, public and scientific perception of the disease gradually transformed.

In this country, high vaccination rates rest on a consensus about the diseases prevented by vaccines. When doctors, health officials and, in particular, parents view a disease as serious, they view its vaccine as one worth getting.

The recent increase in the number of philosophical objectors to measles vaccine shows that historical consensus about the disease itself has eroded in recent years. But history also shows that one surefire route to consensus about a disease is fear of that disease. And fear often spreads like wildfire during disease outbreaks, much like what is happening once again now with measles.

By Elena Conis, Assistant Professor, History at Emory University. This article was originally published on The Conversation. Read the original article.