Hype Around Marijuana As Treatment For Cancer Unwarranted
By The Conversation | November 28th 2014 11:31 AM | Print | E-mail 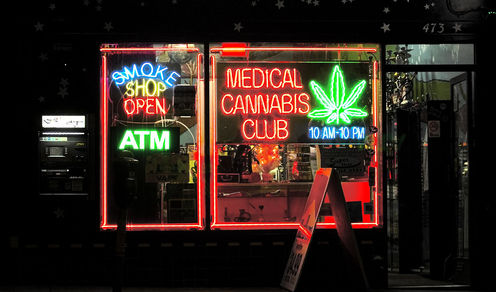 Evidence for role of cannabis in medicine does not strengthen argument for legalization. Thomas Hawk, CC BY-NC

Cannabis has long been touted as containing chemicals that might work against cancer. A recent study suggested that two chemicals found in cannabis, the cannabinoids CBD and THC, could act on an aggressive brain tumor called glioma, where only 10% of people live for five years after diagnosis. The research found that THC and CBD, combined with radiotherapy were able to shrink, but not completely eradicate, gliomas that were artificially implanted in mice.

The results provide useful scientific information, and may indeed improve the treatment of brain cancer patients eventually, after clinical trials and all the other regulatory hurdles that must be cleared before a new treatment can be used in patients. But despite considerable public interest, the data isn’t yet there to show that cannabinoids are an effective treatment option in cancer in humans.

Radiotherapy is currently, regrettably one of the best tools against brain cancer that oncologists currently have. As with many treatments, irradiating the brain often comes with debilitating long-term side effects and patients, scientists and oncologists will universally be hoping that future treatments come with a smaller burden.

If the cannabinoids study is replicated in people with glioma, it may be that less radiation is needed to get the same therapeutic effect – a very welcome advance, but still a long way off being anywhere near certain.

Cancer, cannabis and talk of cures

THC, one of the cannabinoids used in the study, has in fact already been tested in glioma patients: eight years ago in a clinical trial on nine patients. This study achieved its main aim, which was to see if THC was tolerated in these patients without serious side effects, but all of the patients in the study ultimately died within the time expected if they had received no further treatment.

Despite this, the study was cited under the heading “Cures Brain Cancer” on one of many websites listing medical studies that prove “cannabis cures cancer.”

Research is ongoing into cannabinoids around the world, but as Emma Smith, senior science information officer at Cancer Research UK, told me: “Cannabinoids can have a range of different effects on cancer cells grown in the lab and animal tumours, but at the moment there isn’t good evidence from clinical trials to prove that they can safely and effectively treat cancer in patients.”

There are also many other promising – and potentially even more effective – avenues that scientists are exploring for glioma. For example, work published in October showed that treating glioma in mice with a “specific inhibitor” drug called alisertib, targeted against a protein called Aurora-A, prolonged the survival of mice with artificial brain tumours, similar to those in the cannabinoids study.

Alisertib is also already in human clinical trials for a number of different cancer types, so arguably this research is a lot closer to potentially helping patients with glioma, as it is likely to have fewer hurdles to jump over before approval than treatments that are yet to prove themselves in trials. It would be great to hear more about potential treatments at a more advanced stage like this, but it is unlikely to result in the thousands of shares and likes on Facebook that cannabis invites.

So why are we not equally as excited about the numerous other promising preliminary experiments of a similar nature? It is not simply a question of us not hearing about them – cannabis is perceived as special and causes a stir every time a fairly preliminary piece of research comes out. And equally, why are large cancer charities such as Cancer Research UK frequently attacked and forced to dedicate a lot of resources and expertise to debunking the myths surrounding cannabis and for “blocking” cannabis research – despite part-funding a Phase I clinical trial into a synthetic cannabinoid called dexanabinol?

This, too, must come with some caution. Ruth Plummer, professor of experimental cancer medicine at Newcastle University and clinical coordinator of the trial, said it was at an early stage with safe doses and potential side effects still being explored. “While some patients do seem to have benefited from treatment there is still a long way to go before these agents are established as standard treatments for patients.”

Supporters of cannabis as a cancer treatment claim that as the chemicals are plant-based, they are safer and less toxic than conventional chemotherapies. The very well established chemotherapy agents doxorubicin (originally from soil bacteria) and vincristine (originally from the Madagascan periwinkle plant) do both have side-effects, so this assumption is not supported by science.

They have also been proved to work effectively only when purified and used in controlled doses – something that would need to be figured out from research if cannabinoids are to be a useful part of our arsenal against cancer.

A quick trawl of social media sites suggests that the most ardent of supporters of the “cannabis cures cancer” belief are often recreational users who believe that if cannabis does have utility in cancer treatment, it will provide strength to their pro-legalisation stance.

This certainly hasn’t happened so far with a range of strong painkillers and sedatives that are frequently used in medicine but considered illegal without medical prescription – morphine and temazepam are two examples. It’s unlikely that this would be any different with any cannabis derivatives.

If cannabinoids do have a role to play in treating cancer, scientists and doctors will welcome the advances. Currently, however, none of the numerous studies into cannabis-chemicals have shown anything to justify the hype and almost evangelical belief that it is “the cure” generated by many supporters.

Victoria Forster, Postdoctoral Research Associate in Cancer Research at Newcastle University, does not work for, consult to, own shares in or receive funding from any company or organization that would benefit from this article, and has no relevant affiliations.