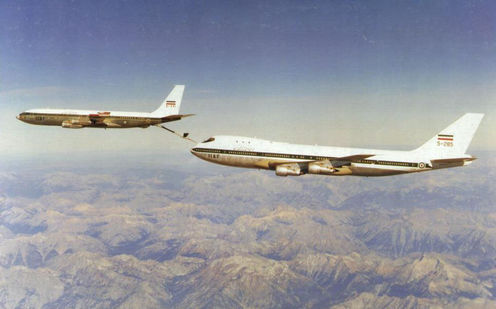 Airlines carry more than three billion passengers each year, which presents an enormous challenge not only for aircraft manufacturers but for the civil aviation infrastructure that makes this extraordinary annual mass-migration possible. Many international airports are close to or already at capacity. The International Air Transport Association (IATA) has estimated that, without intervention, many global airports – including major hubs such as London Heathrow, Amsterdam Schiphol, Beijing and Dubai – will have run out of runway or terminal capacity by 2020.

The obvious approach to tackling this problem is to extend and enlarge airport runways and terminals – such as the long-proposed third runway at London Heathrow. However there may be other less conventional alternatives, such as introducing in-flight refueling for civil aircraft on key long-haul routes.

Our project, Research on a Cruiser-Enabled Air Transport Environment (Recreate), began in 2011 to evaluate whether this was something that could prove a viable, and far cheaper, solution. If in-flight refuelling seems implausible, it’s worth remembering that it was first trialed in the 1920s, and the military has continued to develop the technology ever since. The appeal is partly to reduce the aircraft’s weight on take-off, allowing it to carry additional payload, and partly to extend its flight range.

Notably, during the Falklands War in 1982 RAF Vulcan bombers used in-flight refueling to stage what was at the time the longest bombing mission ever, flying 8,000 miles non-stop from Ascension Island in the South Atlantic to the Falklands and back.

Reducing take-off weight could offer many benefits for civilian aircraft too. Without the need to carry so much fuel the aircraft can be smaller, which means less noise on take-off and landing and shorter runways. This opens up the network of smaller regional airports as new potential sites for long-haul routes, relieving pressure on the major hubs that are straining at the seams.

There are environmental benefits too, as a smaller, lighter aircraft requires less fuel to reach its destination. Our initial estimates from air traffic simulations demonstrate that it’s possible to reduce fuel burn by up to 11% over today’s technology by simply replacing existing global long-haul flight routes with specifically designed 250-seater aircraft with a range of 6,000nm after one refueling – roughly the distance from London to Hong Kong.

This saving could potentially grow to 23% with further efficiencies, all while carrying the same number of passengers the same distance as is possible with the current aircraft fleet, and despite the additional fuel burn of the tanker aircraft. Imagine if these Tornado fighter jets were 250-seater passenger aircraft and you’ve got the idea. Suzanne M Jenkins/USAF

However, this is not the whole picture – in-flight refueling will require the aerial equivalent of petrol stations in order to deliver keep passenger aircraft in the sky. With so much traffic it simply wouldn’t be possible to refuel any aircraft any time, anywhere it was needed. The location of these refueling zones, coupled with the flight distance between the origin and destination airports can greatly affect the potential benefits achievable, possibly pulling flights away from their shortest route, and even making refueling on some routes impossible – if for example the deviation to the nearest refueling zone meant burning as much fuel as would have been saved.

As with all new concepts – particularly those that involve bringing one aircraft packed with people and another full of fuel into close proximity during flight – it’s quite right to ask whether this is safe. To try and answer this question, the Dutch National Aerospace Laboratory and German Aerospace Centre used their flight simulators to test the automated in-flight refuelling flight control system developed as part of the Recreate project.

One simulator replicated the maneuver from the point of view of the tanker equipped with an in-flight refuelling boom, the other simulated the aircraft being refuelled mid-flight. Critical test situations such as engine failure, high air turbulence and gusts of wind were simulated with real flight crews to assess the potential danger to the operation. The results were encouraging, demonstrating that the maneuver doesn’t place an excessive workload on the pilots, and that the concept is viable from a human as well as a technical perspective.

So far we’ve demonstrated the potential aerial refueling holds for civilian aviation, but putting it into practice would still pose challenges. Refueling hubs would need to be established worldwide, shared between airlines. There would need to be fundamental changes to airline pilot training, alongside a wider public acceptance of this departure from traditional flight operations.

However, it does demonstrate that, in addition to all the high-tech work going into designing new aircraft, new materials, new engines and new fuels, the technology we already have offers solutions to the long-term problems of ferrying billions of passengers by air around the world.