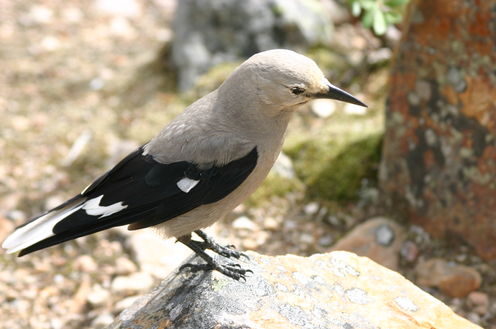 By Sana Suri, University of Oxford

The 2014 Nobel Prize for Physiology and Medicine was awarded to three neuroscientists for their pioneering work on the brain’s “inner GPS system”. Over the course of four decades, they revealed that a small part in the brain called the hippocampus stores a map of animals' surroundings and helps them navigate.

The award-winning work was done in mice, but it has been shown to be true in other animals too. Seed-caching birds and brood-parasitic cowbirds are two of the most remarkable examples that rely on spatial navigation for their existence. Their directional skills can even surpass those of some humans.

Seed-caching birds store food in hundreds or even thousands of sites, and retrieve it hours or even months later. The Clark’s nutcracker (seen above), for instance, displays the most striking hoarding behavior, making more than 5000 caches of seeds in the autumn and recovering them seven to nine months later in the spring.

Similarly, female cowbirds search for host nests in which to lay eggs. Like cuckoos, they do not raise their own young and want to ensure the host that does will definitely be tricked into doing so. They perform a meticulous daily examination of various nests before making a decision and returning to the selected one a few days later. A brown-headed cowbird’s egg in a host’s nest. Credit:  Galawebdesign

The reason for this is that the survival of the baby cowbird is dependent on the relative timing of hatching of host and parasitic eggs. The female cowbirds can only lay their eggs in the hosts’ nests when the host is also laying her own eggs, making the nest very briefly available to the cowbird.

Nests must therefore be erased from the cowbird’s memory as “potential targets” once they are no longer available, just as hoarders have to discard cache sites once they have recovered the food stored in it.

We know that the human brain adapts to meet our daily environmental demands. For instance, the famous “London taxi driver” study found that black-cab drivers had larger hippocampi. The expansion may be most likely because of their dependence on the skills needed to navigate their way through the thousands of winding streets in London.

Are the brains of these birds also specialized to meet the extensive spatial navigational demands that are central to their survival?

Yes. The hippocampus of seed-caching birds is larger – relative to total brain size – than that of non-storing birds. Notably this enlargement is absent in fledglings and only begins when the bird begins to hoard.

These findings raise the possibility that hippocampal enlargement occurs alongside the bird’s need to navigate. But does a bigger hippocampus provide these birds with a memory advantage?

It is difficult to associate one particular kind of memory with one structure in the brain. In an attempt to answer this question, however, scientists have mimicked the seed-retrieval process within a laboratory setting.

Seed-caching birds typically perform better on such tasks – aimed at resembling the process of “retrieval” of stored food – than non-storing birds. This suggests that hoarding birds store spatial information more accurately than non-hoarders. Damage to the hippocampus does not seem to affect motivation, hunger, or performance on non-spatial tasks, but instead selectively impairs memory for the location of food.

The evidence for a link between behavior, hippocampal volume and spatial memory is not straightforward though. For instance, one study showed that male and female cowbirds did not differ in performance on a spatial memory task, even though females had larger hippocampi.

However, given that we do not know how laboratory settings match up to natural environments, there may be other factors that we are unable to control for. Yet, it seems reasonable to suggest that the brains of food-storing and brood-parasitic birds have adapted to meet their extensive navigational demands.

Sana Suri, PhD student at University of Oxford, does not work for, consult to, own shares in or receive funding from any company or organization that would benefit from this article, and has no relevant affiliations.