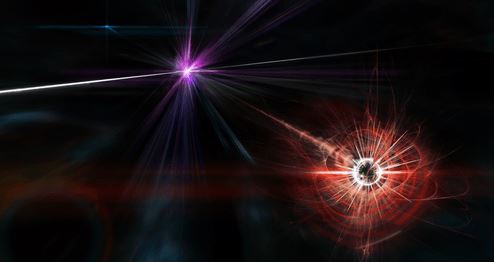 Physicists around the world (myself included) are hoping that this week will mark the beginning of a new era of discovery. And not, as some fear, the end of particle physics as we know it.

After 27 months of shutdown and re-commissioning, the Large Hadron Collider has begun its much-anticipated “Season 2”. Deep beneath the Franco-Swiss border, the first physics data is now being collected in CERN’s freshly upgraded detector-temples at the record-breaking collision energy of 13 teraelectonvolts (TeV).

Much has been written about the upgrade to the accelerator, the experiments, and the computing infrastructure required to handle the fresh deluge of data from the new energy frontier. There has also – quite rightly – been a lot of attention paid to the crowning achievement of Run 1: the discovery of the Higgs boson.

But the “elephant in the collider” is this: we knew that Run 1 had to find the Higgs boson – or something like it, and it did.

With Run 2, we don’t know what we’re looking for.

OK, so maybe that’s bit of an over-simplification. We certainly have a good few guesses as to what’s beyond the Standard Model of particle physics, our current best understanding of matter and forces at the fundamental level that was essentially completed in July 2012.

One of the leading contenders is supersymmetry, a theory that provides a candidate for the dark matter that supposedly makes up some 23% of our universe. As it happens, my PhD was based on the first results from the LHC Run 1 that said we hadn’t found evidence for supersymmetry.

To date, I have not had to write an embarrassing addendum to my thesis. But, while there are many compelling arguments for supersymmetry, it is not required in the same way the Higgs boson was. The Higgs was a missing piece in our current physics jigsaw; supersymmetry would represent a new puzzle entirely.

Does that make Run 2 a waste of time? Are we pouring money into an extra-dimensional wild-goose chase? Are we, in fact, staring down the barrel of the end of collider-based particle physics?

You’d be forgiven for thinking so, if you had no knowledge or understanding of the history of particle physics (or how science works, for that matter). After all, science is arguably at its most boring when you 1) know exactly what you’re looking for, and 2) find it.

It’s much more fun to consider physics in the middle of the 20th century. You could pretty much describe all of known physics, chemistry, materials science, and biology with electrons, protons, neutrons and photons. Yet advances in particle detector technology – Wilson’s cloud chamber, Blackett’s triggers, Powell’s photographic emulsions – led to the discovery of completely new particles outside of this comfortable model of nature.

At the time, cosmic rays – particles bombarding our atmosphere from outer space – had far greater energies than the particles laboratory-based accelerators could produce. They represented a new energy frontier for physics, explored by the heroic particle hunters of the 1930s and ‘40s who trekked up mountains, launched high-altitude balloons, and flew airplanes in search of their quantum quarry.

They were rewarded for their efforts with, among other things, strange particles, a completely new type of matter that defied the predictions of the time and opened the door to a veritable zoo of subatomic building blocks.

The second half of the 20th century saw a trans-Atlantic race to build bigger and bigger particle accelerators to artificially produce cosmic rays in the controlled conditions of the laboratory and tame the particle zoo. This race was, arguably, won by the LHC. As we approach the new, unknown energy frontier of Run 2, we are therefore once again in need of a new generation of particle hunters.

We need experimental physicists who are able to painstakingly pore over every byte of data in search of “what’s next”.

Personally, I have eschewed supersymmetric searches (been there, done that) and, along with the students of the Langton Star Centre, joined the MoEDAL Collaboration. This experiment is looking for Paul Dirac’s hypothesized magnetic monopole. Based in the LHCb cavern at Point 8, MoEDAL (Monopole and Exotics Detector at the LHC) will use a number of novel detector technologies to look for tracks generated by the heavy, highly-ionizing magnetic monopoles that could, in theory, be produced in the proton-proton collisions.

Magnetic monopoles are the magnetic equivalent of single electric charges – like a magnet with only a north or south pole, and not both - and their discovery would shake physics to its electromagnetic core. It’s a high-risk, high-reward search – but by providing alternatives to the traditional detector methodologies of CMS and ATLAS, we’re ensuring that as many bases are covered as possible.

We don’t know what we will find in Run 2. It could be monopoles, dark matter, micro-black holes, extra dimensional excitations, gravitons or something else entirely. What’s certain is this: if we are to find anything, we are going to have to be incredibly clever about how we go about it. We may even need your help. If we don’t find anything, it might be the beginning of the end of what terrestial, collider-based physics can tell us about the Universe. But even a null result from Run 2 would still be a result, and an important one at that.

So, it is the dawn of a new era for particle physics. It is time for the experimentalists to once again outshine their theoretical friends. It is open season for the particle hunters.

You can find out more about the MoEDAL experiment at this year’s Royal Society Summer Science Exhibition, 30 June - 5 July, London.

By Tom Whyntie, Visiting Academic and GridPP Dissemination Officer at Queen Mary University of London. This article was originally published on The Conversation. Read the original article. Top image: An artist’s impression of the much-searched for magnetic monopole. Heikka Valja/MoEDAL Collaboration