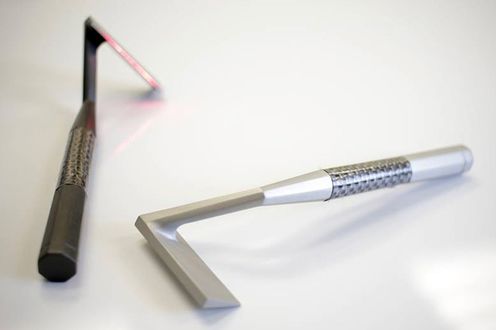 Since their first use in the 1960s, there has been a tremendous expansion of laser technology into an impressively wide range of uses, from fundamental science, health care and security to entertainment. Since Theodore Maiman’s first working laser at the Hughes Research Laboratory in 1960 more than 55,000 patents on laser technology have been filed in the United States alone.

It’s always dangerous to make any definite statement about the potential future for some new idea or invention, since we’re not able to predict the future: notoriously (and probably apocryphally) Thomas Watson of IBM said in 1943: “I think there is a world market for maybe five computers.” But that doesn’t mean we should be carried away with excessive optimism, or swayed by bad ideas.

Take for example the Skarp, an apparent laser-powered shaving razor whose Kickstarter crowdfunding campaign quickly raised an astonishing US$4m, before being banned by the Kickstarter team. The official reason was that without any evidence of a working prototype, the project had nothing to back up its claims.

Is a laser-powered razor even possible? We need to take a step back and understand what lasers can and cannot do, at least for now.

It’s useful to classify lasers depending on the effect they have on matter of any kind, let alone on living tissue such as a man’s bearded face. Some lasers are of such a low power that they cannot alter the matter they interact with. These are used either for detection and probing or for entertainment – for example barcode scanners, the lasers in CD/DVD players, laser pointers and fancy disco lighting.

At an intermediate level we have lasers that have only a superficial effect, where the laser light is able only to induce an effect a few nanometers inside the object they’re trained on. For example, the lasers used in printers and, to some extent, some lasers used for cosmetic uses such as tattoo removal and depilation, or more substantial surgery such as laser eye surgery.

Even though we might feel safe around these sorts of lasers, they are still hazardous if they mishandled – for example, by staring directly into the beam. It goes without saying that our retina is particularly sensitive to light, and this class of lasers can burn portions of our retina, producing permanent blind spots in our vision or even blindness.

Finally, we find lasers that are so powerful that they can significantly alter the entire object they’re aimed at. For example, such dangerous lasers are found in the big cutting lasers tools used in heavy industry, or by the ultra-powerful lasers that are used in fundamental scientific research or to trigger controlled nuclear fusion.

So it shouldn’t come as a surprise that, especially when dealing with direct irradiation effects on humans, anything with a laser in it must be thoroughly tested before a working prototype can be presented for patenting and licensing, let alone open sale.

Short and long-term effects on human skin or eyes might be detrimental, and unfortunately in most cases irreversible.

The promotional video for the Skarp laser-razor indicates a small, battery-powered laser housed inside a standard razor handle with a thin red line indicating the apparent irradiating laser source. The comparison with laser epilation (hair removal) techniques is quite striking, since they are effectively proposing a compact version of these systems. Even though the right amount of laser power can in principle be achieved by such a small device, the striking lack of technical details and clinical trials makes it hard for us to give an opinion on its true viability. Such a bold claim by the Skarp’s inventors is more likely to raise eyebrows than funding – it’s always a dangerous game to make a big claim before having solid evidence to back it up.

With all the development laser technology is experiencing these days there is the potential for new uses and that would simply be unthinkable in the past. For instance, scientists are now able to use ultra-intense lasers to follow chemical reactions in real time, and to reproduce conditions similar to the early stages of our universe. However, all these works result from years of painstakingly detailed testing and calibration. This is a necessary step before any major technological advancement – and especially so if the idea is to apply it to humans.

Laser technology is most certainly going to continue to have an impact on our lives but we should not be carried away by enthusiasm, as the case of the Skarp razor demonstrates.

Gianluca Sarri, Lecturer at the School of Mathematics and Physics , Queen's University Belfast. This article was originally published on The Conversation. Read the original article. Top image: Skarp Technologies