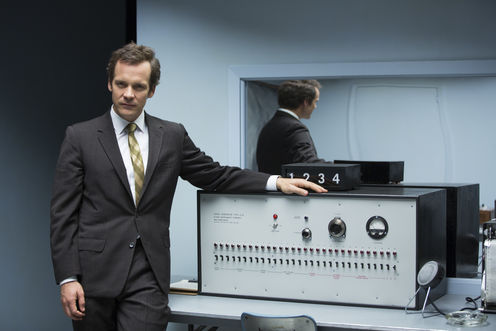 Why have the landmark psychology experiments of the post-war era proved so enduring? Designed as dramas about human behavior, experimenters drew on theatrical techniques and tailored their results for cinema – results that, though skewed, have become embedded in the collective subconscious.

The two best known experiments of this sort are Obedience to Authority (1961-3) devised by Stanley Milgram and the Stanford Prison Experiment (1971) staged by Phillip Zimbardo.

Now, those experiments are back in the spotlight with two fictional films – the Milgram biopic The Experimenter (2015) and the Stanford Prison Experiment (2015) – which screened at the Sundance Film Festival last week, and more in the pipeline. My own upcoming feature documentary Shock Room is among them.

Over the decades these experiments have inspired multiple screen translations. This raises the important question: are they as much art as science? That’s a question Milgram asked himself when he called “wrap” on Obedience (1965), the documentary film that authored his results. But let’s rewind …

In the early 1960s Milgram ran a series of controversial experiments at Yale University. He wanted to understand the Holocaust. How did it happen? How could people have let it happen? Are we programmed to follow orders? And if we are, how might we change that?

More than 1,000 New Haven (Connecticut) residents were recruited for what they were told was a study about learning and memory. The drama they took part in urged them to inflict apparently lethal electric shocks on another human being. Milgram watched the action unfold from behind a one-way mirror.

Milgram’s own data suggests otherwise. So how did the Obedience narrative come to prevail?

Although he ran more than 25 versions of his experiment, Milgram filmed only one of them. Over a weekend in May 1962, he ran the best-known version: the Coronary-Tape Condition. The victim (the person receiving the electric shocks) stated that he suffered from a minor heart condition.

At standardized points, an audio tape was played in which he screamed out in pain. Subjects (the participants inflicting the shocks) were filmed via concealed cameras. At the end of each session, Milgram debriefed participants and requested permission to use the footage for scientific purposes.

But as my detective work in the Yale Archives has revealed, in the filmed version of the experiment 65% of participants disobeyed. Yet Milgram edited his film to show the opposite: that two-thirds will do as they’re told.

Milgram himself described his experiments as a fusion of art and science. He devised a scenario, designed its theatrical setting, and rehearsed his accomplices. He cast randomly selected citizens in a long-running structured improvisation.

This was ensemble drama on an epic scale. Influenced by Greek tragedy, the morality plays of medieval century Europe, early reality television (Candid Camera) and the improvised happenings of the 1960s.

The experimental design and dramaturgy combined to elicit dramatic behavior. As Obedience demonstrates, Milgram’s direction produced performances rich in what Brecht called the “quotable gesture”. A fake shock machine engineered to look like a scientific instrument, played an important role.

We see the pseudonymous Fred Prozi, an obedient subject who has become the Everyman of Obedience, wavering, agonizing—before he pushes the lever. Later his hands shook as he lit a cigarette. By contrast, the defiant Subject 2514, a balding man in business attire, resisted the Experimenter’s demands:

“You have no choice. You must go on,” said the Experimenter.
“Oh, I have plenty of choices,” said 2514, folding his arms.

At the height of opposition to the Vietnam War, student audiences clapped and cheered this man. As a defiant participant, his behavior was actually more typical than that of Prozi. Why then do we not see him as the Everyman of Milgram’s morality play?

Ten years after Milgram’s Obedience to Authority experiment, Phillip Zimbardo assembled a panel of expert advisors to help design the rules of his Stanford Prison simulation.

To investigate the degree to which people conformed to roles such as Prisoner and Guard in correctional settings, he aimed for a high degree of situational realism. Students assigned the roles of prisoners were picked up on the streets by (real) police in squad cars, handcuffed, blindfolded and strip-searched on arrival at the “University Prison” he established in a basement. (Imagine a contemporary Ethics Committee letting you set up a gaol in your faculty building!)

Zimbardo’s University Prison included three cells and an area for solitary confinement. Proceedings were videotaped surveillance-style from behind a screen. Scheduled to run for two weeks – but abandoned after six days on ethical grounds – the Stanford Prison Experiment (SPE) combined an improvisation with aspects of durational performance art.

Unlike Milgram’s behind-the-scenes observation, Zimbardo starred in his own show, casting himself as the Prison Superintendent and actively exhorting guards to mistreat detainees. His experiment has been criticized because of this – and also because he did not publish his results in refereed journals.

Of course the SPE was showmanship. We had costumes, we had a set. I prepared it as if it was a play or a movie. A lot of the research I do has dramatic flair, a dramatic quality. It’s a dramatisation of psychological concepts.

Zimbardo’s videotapes from the Stanford Prison Experiment were not edited into a documentary until the 1990s. The resulting film Quiet Rage (1992) is an odd mash-up of low-resolution footage and instructional video.

The images that really hit home are black-and-white stills of prisoners in poses that eerily predict those of Afghani prisoners abused at Abu Ghraib in 2005.

Milgram’s and Zimbardo’s experiments are vivid and memorable. They resonate deeply, yet over time elements of both studies have become un-moored from their original settings. Stripped of context and the big-picture narrative, story fragments, gestures and image grabs get quoted in ever more films. Fred Prozi at the shock machine. Students in prison clothing.

But where are the images of resistance? Where are the complex, nuanced stories about why the people who obeyed did so? Where are the instances of what scholar Tsvetan Todorov, writing about the Nazi death camps, has called “ordinary virtues”? (As distinct from “heroic virtues”.) Ordinary virtues such as caring, dignity and exercising the life of the mind.

Far from demonstrating that we blindly obey, Milgram’s experiment is a rich source of insights about the conditions under which people not only obey, but also resist the dictates of their consciences. It is as much drama as laboratory study.

We are at a critical time in remembering these experiments – and the historical events to which they refer. Some 70 years after the liberation of Auschwitz, as Holocaust survivors approach the end of their lives, individual memories and testimonies are being consolidated into our cultural memory.

Is that why these experiments are once again part of the zeitgeist?

Kathryn Millard, Professor of Creative Arts at Macquarie University, receives funding from the Australian Research Council. This article was originally published on The Conversation. Read the original article.