Mystery Monoliths: How To Build A Better Conspiracy
By The Conversation | December 7th 2020 03:18 PM | Print | E-mail

The three recent appearances (and two subsequent removals) of “monoliths” in Romania, Utah and California are intriguing examples of what can capture the public’s imagination.

These constructions are metallic-looking structures about three or four metres tall, with a simple geometric design and reflective surface.

Adding to the mystery, the Utah monolith was reportedly in place long before it came to light on November 18. While its location wasn’t announced, members of the public found Google Earth images of the object dating back to 2016. 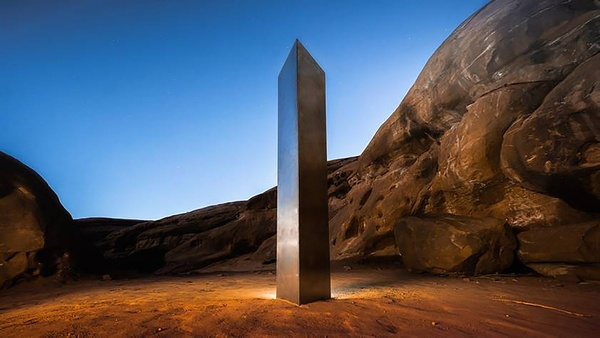 Credit:  AP/Terrance Siemon via The Conversation.

So far, no credible source has suggested the structures are a product of alien technology or supernatural influence. And unlike with UFO sightings and Area 51 news, governments have not been accused of a cover-up.

So even though Google Trends data shows global search interest in “monolith” has shot up since the structures were found, they’re not yet the subject of widespread conspiracy. And a reflection of past similar phenomena suggests they won’t be.

The maker (or makers) of the curious objects are likely still around, but they’re not talking. In the meantime, the structures call to mind some major oddities and artefacts from the past, all of which gained considerable fame.

Peru’s Nazca lines are one example. These shallow depressions in rock from around 500 BCE form colossal shapes of animals and plants which, intriguingly, are best observed from the air. 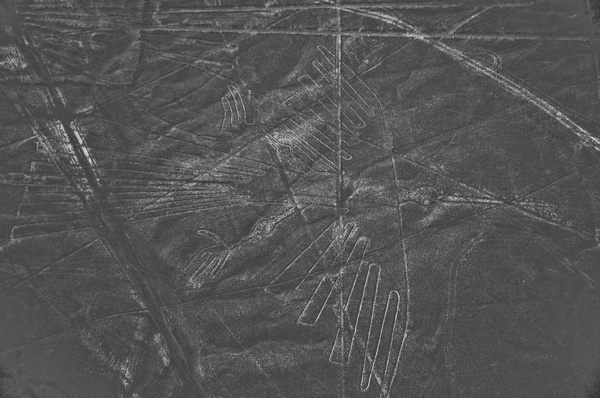 The crop circle phenomenon may also strike a chord. These complex geometric patterns which apparently form overnight in fields across the world have captured imaginations for decades.

Both these phenomena have produced exotic accounts claiming to explain them. Some have said the Nazca lines were created to communicate with space travellers. Crop circles, others say, are the product of alien labour meant to send us a message.

No one knows why the ancient Peruvians made their lines. Their motivations may be hidden forever. Crop circles, however, are a modern occurrence.

And despite claims they couldn’t possibly be made by humans, humans make them all the time, often for the enjoyment of their effect on others. Crop circles also drive tourism in certain parts of the world. 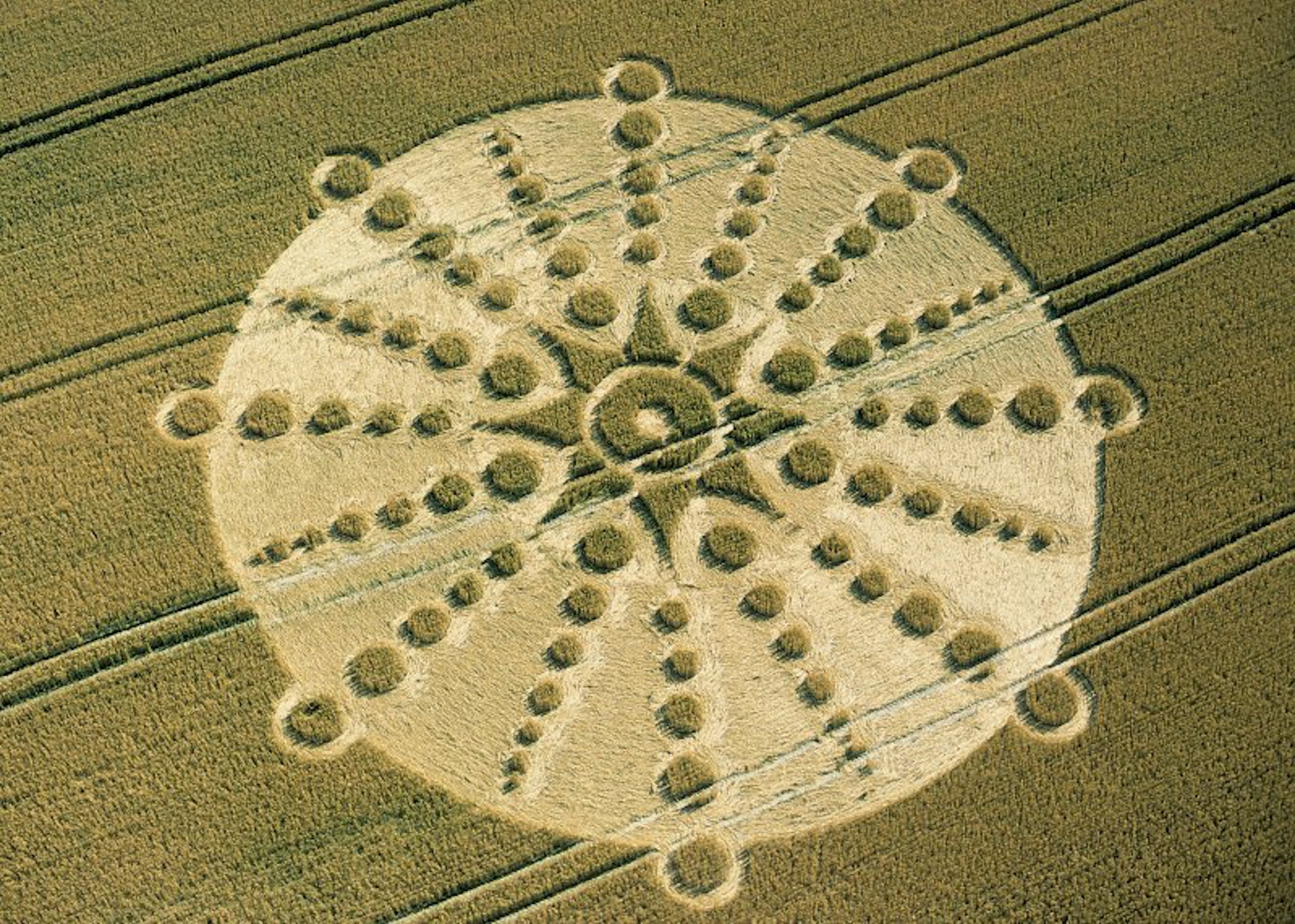 But why are we so easily grabbed by such peculiarities anyway? After all, our lives aren’t impacted by them.

There are many possible reasons people fix their attention on potential oddities, and even start believing strange things about them.One is that they short-circuit our sense of how the world works — injecting novelty into an otherwise routine and coherent existence.

As the physicist and Nobel Laureate Richard Feynman said:

…the thing that doesn’t fit is the most interesting.

The tendency to imagine alternatives and to entertain a “what if?” scenario is the same reason we love reading speculative fiction.

If the Nazca lines really were etched to communicate with aliens — and if crop circles really represent alien messages targeted at us — the model of the world in our heads would be flipped.

There’s nothing to suggest the above phenomena are evidence of anything extraordinary. 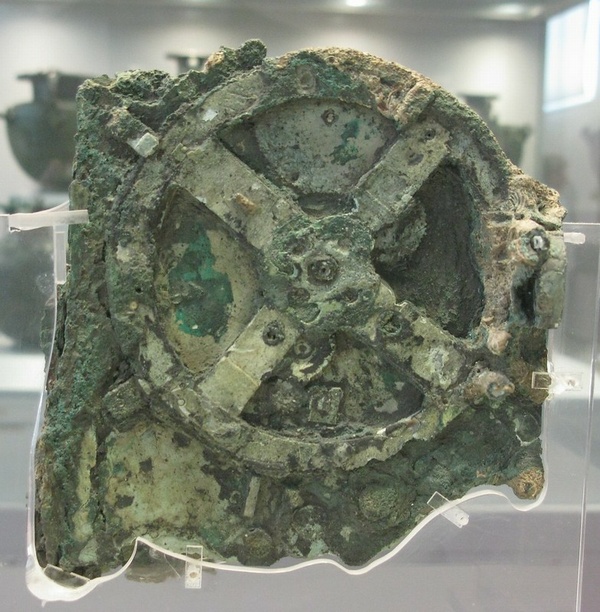 The Antikythera Mechanism is an out-of-place artefact. These are artefacts of historical, archaeological, or paleontological interest which challenge widely accepted historical chronology. Flickr

Another interesting “out-of-place” artefact is the ancient Antikythera mechanism. This is seemingly an analog computer once used to predict astronomical positions and events.

But perhaps most notorious are the old favourites: Egypt’s Great Pyramid of Giza (and the widespread conjecture surrounding its construction), Stonehenge in England, and the enigmatic Easter Island statues. All have been connected to aliens, lost wisdom or extinct civilisations.

In case you need a summer project

When it comes to creating a spectacle worthy of the public’s attention, there are some key lessons to be learned from past successes in making artefacts, including:

It pays to do something on a large scale, either by making a big artefact, or having small ones appear over a very large area.

The meaning of the artefact should remain unclear, or at least allow room for interpretation. It’s in these situations of uncertainty that the human imagination can run wild.

While the monoliths’ intent is unclear, they could be explained as art. Reports have pointed to their similarity with artwork by minimalist sculptor John McCracken.

It’s nice if the artefact is aesthetically pleasing or interesting. The geometric precision of pyramids and crop circles speaks to significant care and perhaps mathematical sophistication. The monoliths are comparatively basic.

A display that has never been seen before is far more newsworthy. The monoliths are highly derivative of those appearing in Stanley Kubrick’s 2001: A Space Odyssey.

Be difficult to copy

The monoliths could have been knocked up in a workshop. The “wow” factor for artefacts usually comes through an appreciation of their complexity, or seeming impossibility of their manufacture. The scale of the Nazca lines speak to this, as do potential efforts to construct Giza and Stonehenge.

Humans can do amazing things

Whatever the true explanations, most phenomena can be attributed to human ingenuity and a willingness to persevere. Simply, we must ask:

In most cases, the former is true. Although the time and resources required must have been momentous, it was clearly not impossible to build Giza. We’ll probably have to face the fact humans are just very clever and industrious.

It’s harder to be sure the second point is true, although that doesn’t mean it isn’t.

But every now and then we also like to have fun with artefacts and generate something unique and novel, even if it is for entertainment value alone.

By Peter Ellerton, Senior Lecturer in Critical Thinking; Curriculum Director, UQ Critical Thinking Project, The University of Queensland. This article is republished from The Conversation under a Creative Commons license. Read the original article.