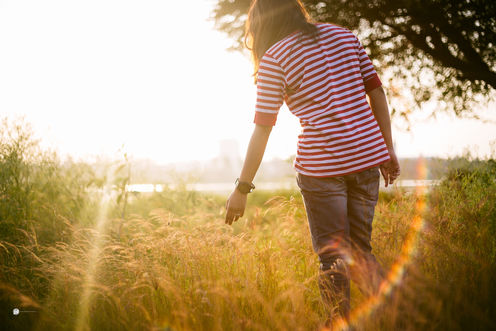 Sunlight may have benefits not yet discovered. Joseph D'Mello CC BY-NC

Summer sunshine makes most of us feel better, but there may be more to the benefits than just feeling good.

A growing body of evidence suggests sunlight itself – with adequate protection, of course – may actually be good for health.

Sunlight comprises two types of solar radiation: UVA, which causes reddening and burning of the skin, and UVB. The latter increases the production of an inactive form or precursor of vitamin D by the skin, which is then activated by the liver and kidneys.

Unfortunately, both UVA and UVB also increase the risk of skin cancer, including the most deadly type, melanoma, which is why you should always take a balanced approach to sunlight exposure.

Only a few foods, such as fatty fish and mushrooms, contain vitamin D, so we get most of it from sunlight. This means not enough sun exposure, or pigmentation of the skin (which diminishes the production of vitamin D precursors), often results in low vitamin D levels.

Vitamin D deficiency is associated with many signs of ill health and diseases. These include low bone density and broken bones due to osteoporosis, muscle weakness, diabetes, multiple sclerosis, cardiovascular disease, colon cancer and an overall increased risk of dying prematurely. But studies of supplementation with this vitamin have not always shown beneficial effects on treating these conditions.

My colleagues and I previously found support for this theory when we discovered an association between low vitamin D levels and the development of type 2 diabetes. For every ten-unit decrease in blood vitamin D levels, we found a 10% increased risk of developing this form of diabetes over the following five years. But when we gave supplements of vitamin D to patients with low vitamin D levels who were already at risk of developing diabetes, there was no overall improvement in their sensitivity to insulin. Nor was there a change in their blood glucose levels compared with those given inactive tablets.

This disconnect between low vitamin D levels increasing the risk of disease, and the failure of consuming more vitamin D (by increased sun exposure or supplementation) to reduce risk, could mean sunshine has unknown effects on health. These could include the impact of sunlight on daily biological rhythms, such as the one governing our sleep cycle (circadian rhythms), on reducing physical stresses on the body’s cells and by increasing heat production.

Another important potential effect of sunlight is UV-induced suppression of the body’s immune system. Solar radiation does this by altering the activity of the white cells involved in turning on the body’s defence mechanisms.

At first glance, this may seem to be a bad thing because it could increase the risk of infections and skin cancer. But it can also have a protective role in reducing inflammation and therefore help against some inflammatory diseases.

People who don’t get enough sunlight have altered cellular defense mechanisms that predispose them to excessive inflammation, which can result in autoimmune diseases. It’s important to get the right balance between too much or not enough sunlight. Dmytro/Flickr, CC BY-NC

These diseases involve the body mistakenly attacking its own tissues, and include multiple sclerosis, lupus, type 1 diabetes and inflammatory bowel diseases, asthma and skin disorders such as psoriasis and atopic dermatitis. A little sunlight can reduce the numbers of the activated cells that lead to inflammation, and so the risk of getting these diseases.

UVA has also been shown to lower blood pressure, increase blood flow and heart rate, all of which are beneficial to the heart and blood vessels. This is probably the result of UVA causing the release of nitric oxide from skin stores, which promotes widening of blood vessels. It also acts as an antioxidant to prevent damage to cells.

Future research will try to determine whether increasing vitamin D by UVB, or other sunlight-induced mechanisms such as altering the body’s immune defense mechanisms, are better for improving health outcomes, but at least a little sunshine definitely appears to be a good thing for health.

Still, it’s important to get the right balance between too much or not enough sunlight. Guidelines try to minimise the risk of skin cancer while ensuring people can still harvest the health benefits of sunshine.

Basically, avoid sunlight when the UV index is three or higher. Take all protective measures if you have to be outside at these times. And seven minutes of sun exposure to the face, arms and hands at or before 11 am, or after 3 pm on most days in summer is adequate for getting enough sun for health benefits, especially when combined with exercise.

So, remember, get outside for a little bit of sunshine whenever you can do so safely.

By Peter Robert Ebeling, Head, Department of Medicine, School of Clinical Sciences; Professor of Medicine at Monash University. This article was originally published on The Conversation. Read the original article.