Pregnancy Reenvisioned As A Conflict-Driven Battle Between Mother And Child
By The Conversation | May 6th 2016 04:30 AM | Print | E-mail

Pregnancy sounds like the ultimate form of animal cooperation – mothers share their own bodies to grow and support their children’s prenatal development. But in reality, embryos use every trick in the book to take more than their fair share. Mothers, in turn, marshal their best defensive tactics.

My colleagues and I are interested in how the mechanisms of this battle could have evolved. We recently investigated some differences between closely related animals that carry their young and others that lay eggs to figure out how hormones evolved to be expressed in the placenta. By understanding the processes that support conflict, we can identify how this conflict arose, and the impacts that it might hold for human health.

Placenta as a combat zone The placenta allows mother and embryo to exchange resources. Gray's Anatomy of the Human Body

During pregnancy, mothers support their offspring by providing nourishment across a placenta. Formed from both the embryo’s and mother’s tissue, this organ facilitates the exchange of materials between the two. The placenta is responsible for transferring oxygen and nutrients to the baby, while taking away waste products like carbon dioxide and urea.

By secreting hormone signals across the placenta to be received by the mother’s body, embryos can alter the amount of food they’re provided. In a truly cooperative world, offspring would release these “gimme more!” hormones only if they were undernourished. But embryos actually produce these hormones demanding more of the mother almost constantly throughout pregnancy.

Mothers' bodies fend off these hormonal demands with defenses including the development of physical barriers between the embryo and the maternal blood supply, and the production of enzymes that can break down excessive levels of embryo-produced hormones.

But where did the tools embryos use to wage this battle come from? That’s the question my colleagues and I recently investigated. 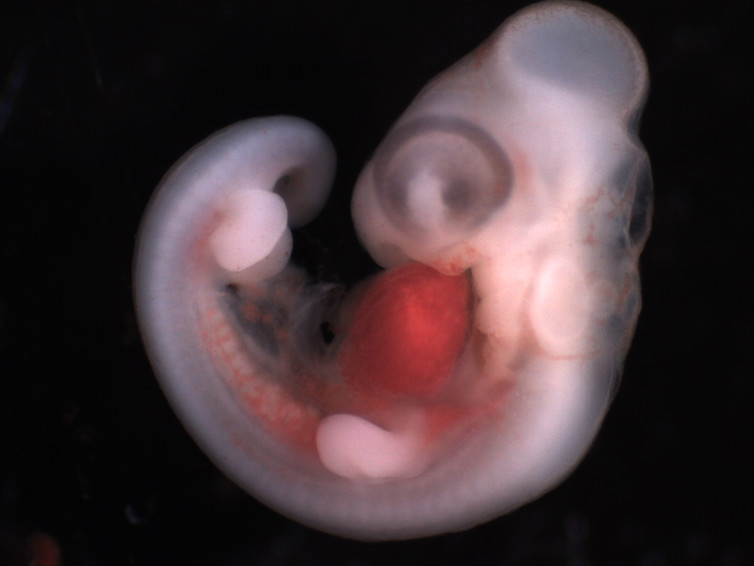 Hunting for the origins of the conflict

Placentas are not limited to mammals. They’re also found in reptiles and fishes like the seahorse.

In recent research published in the journal General and Comparative Endocrinology, my collaborators and I aimed to identify how an animal species evolves a placenta.

We know that live-bearing animals evolve from egg-laying ones, but we were curious about the role of parent-offspring conflict in this process. Did placental control of pregnancy evolve via novel hormones? Or did it rely on genes that were already present in the ancestral populations?

Our first step was examining the hormones produced by the placental tissue of three animal species: the horse, the southern grass skink lizard and a live-bearing population of the southeastern slider lizard.

We know each of these groups evolved pregnancy independently, because each is more closely related to an egg-laying species than they are to each other. For example, the first mammals were egg-laying and some of them are still around today – Australia’s platypus, for instance. Similarly, each of the live-bearing lizard species we studied has closely related egg-laying relatives.

By studying both the live-bearing and egg-laying relatives of these animals we can understand the things that are necessary for the transition. We compared the list of hormones produced by these animals' placental tissues to a similar tissue from two egg-laying animals: the chicken and an egg-laying population of the southeastern slider lizard. These species don’t have placentas because they lay eggs rather than carrying their unborn young internally. But placentas evolved from a membrane that lines the internal surface of developing eggs. This embryonic membrane supports the exchange of gases between the embryo and the world outside its egg.

When we compared the genes found in the embryonic membrane of species with and without a placenta, the lists largely matched. This finding shows that the hormones used by embryos to manipulate their mothers evolved a long time ago, in an ancestor of both reptiles and mammals. When pregnancy evolved, the mechanisms to initiate conflict between the mother and embryo were already in place.

While we don’t know the function of these hormones in egg-laying species, we can speculate. The embryonic membrane is the first living point of contact between an embryo and the outside world. These hormones may alter the development of embryos in response to some environmental stimulus, such as temperature or disease.

Mom vs. dad at the placenta battlefield

Why are mothers and embryos at odds, anyway?

After all, animals have two major evolutionary goals: to survive and to produce fertile offspring to spread their genes. Individuals maximize the fitness of their genes by producing as many healthy offspring as they can over their lifetime. So it seems reasonable that mothers would want to support their offspring to give them the best chance of survival – as long as it doesn’t put mom herself at risk.

But remember, offspring contain genes from both parents. If a father can alter the development of his offspring in a way that allows it to take advantage of the mother, even if it imposes a cost on her, it would give him and his genes a fitness advantage.

This is particularly critical when females mate with multiple males. In this case, a father may be the parent of just one or a few of the many offspring a female produces over her lifetime. He wants his offspring to have an edge over others fathered by competitors. Ways to control development beyond genes

As a result of the ongoing battle across the placenta, some animals have evolved strategies to affect the development of their children in ways that do not include changes to the genes they pass on.

For instance, males and females can mark the genes of their sperm and eggs in different ways so the effect of the gene depends on which parent passed it on. Scientists call this phenomenon – when a gene’s outcome in an individual depends on whether it was inherited from the mother or father – genomic imprinting.

Genomic imprinting is one mechanism by which the placenta battle can be waged.

The gene that produces insulin like growth factor two (IGF2) is an example. It controls placental growth: more of the hormone results in a bigger placenta and more nutrients being transferred to the offspring, while lower production results in smaller offspring.

When the mother makes egg cells, she modifies the IGF2 gene by adding molecules that ultimately change the structure of DNA. With this alteration, the genes encoded by the DNA cannot be expressed. So in normal offspring, the maternal copy of this gene isn’t expressed, while the paternal copy is. Mom is working to make sure the embryo doesn’t greedily take more resources than it needs, while Dad is happy to see the embryo garner more than strictly necessary.

My research group wanted to identify whether genomic imprinting is present in the reptiles that have a placenta. In research published in the journal Development Genes and Evolution, we looked at the genes that are imprinted in the placenta of mammals, and checked for imprinting of those same genes in the southern grass skink.

It turned out none of the mammalian imprinted genes are imprinted in this lizard, suggesting some fundamental differences between the role of conflict in mammalian and reptile pregnancy. The war in mammal placentas is waged using genomic imprinting, where as in reptiles, it appears that mothers and fathers must use other tools.

Together our studies suggest that the genes responsible for conflict in animals that exhibit pregnancy were present in the embryonic membranes of the most recent common ancestor of mammals and reptiles, which lived more than 300 million years ago. It looks like conflict between mother and child is baked into species, and is likely to occur anytime pregnancy evolves in animals.

While the processes that underpin conflict are well understood, many questions remain. How does the process of conflict contribute to the evolution of a complex organ like a placenta? I’m interested in how this internal conflict interacts with the environment in natural ecosystems. For example, how does the availability of resources affect how the mother provides those resources to her offspring? My ongoing research seeks to understand how resource availability affects what embryos receive through the placenta, and the genetics that underpin this organ’s function.

By Oliver Griffith, Postdoctoral Associate in Ecology and Evolutionary Biology, Yale University. This article was originally published on The Conversation. Read the original article.