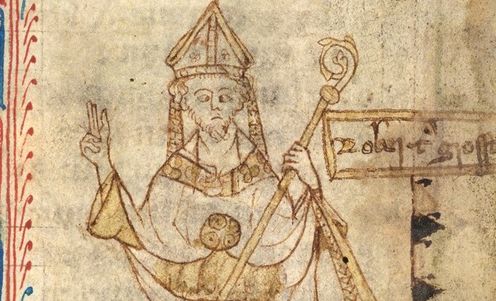 There was something unusual about our recent research collaboration on the science of light, colors and the perception of rainbows: one member of the team wrote his best science in the 1220s.

The Ordered Universe Project sees humanities scholars and scientists come together to carefully read the 13th century scientific treatises of the English polymath Robert Grosseteste. It was set up in the hope that the work’s technical content might receive a deeper analysis than previous scholarship.

What no one expected was that the scientists in our team would be inspired to do new work as a result. They have ended up becoming co-authors of new scholarly editions of medieval texts. And the humanities scholars among us now also co-author papers in the Proceedings of the Royal Society and other scientific journals.

Grosseteste – “The Greatest Mind You’ve Never Heard of” according to the title of the festival event sponsored by the Arts and Humanities Research Council – lived at an explosive period in the history of thought. He was born in East Anglia of humble origins in the late 12th century. But his studies in Hereford, Oxford and probably Paris enabled him to crest the new intellectual tidal wave surging through the schools and early universities of Europe, triggered by the rediscovery of most of Aristotle’s writings.

The bright, eager and incisive mind that Grosseteste clearly possessed fed hungrily on this wealth of new material. He was also clearly inspired by the realization that the human mind can through observation and thought discover structures within the material world that were previously hidden and understand them for the first time.

For example, in his treatise on the rainbow, De iride, he is the first to identify refraction as the phenomenon that produces the rainbow (rather than reflection, as Aristotle thought). Any scientist today would also recognize his articulation of the “aha!” moments we all live for, a phenomenon he calls “sollertia”.

His thinking is, of course, of its own time not of ours. So when he tackles the problem of cosmic origins, the physical problem he sets himself is the creation of a universe with the Earth at its center, a model we know today to be wrong.

His Christian worldview does inform his thinking, motivating him to argue that the physical origin of the cosmos is a real issue, contradicting Aristotle who proposed a world without any beginning. But for this 13th century bishop (Young Earth Creationists please note) it is the questions, not the answers, that lie in the book of Genesis.

The result is a highly mathematical and physical “Big Bang” theory of an early expanding universe driven by the force of light, that for the first time unites the Earth, the Moon and the cosmos beyond them under a single physical theory of matter. His formulation gave the team some computational headaches to work through even 800 years later. His was a truly integrated mind that expected to see the laws of light and matter at work in the cosmos also visible in common objects on Earth. So for Grosseteste, color is a manifestation of just this. The Ordered Universe team were able to tease out from the 400-word jewel of a treatise De colore (On color) that he thinks of colors within a three-dimensional abstract space. For Grosseteste, the differences between all possible colors can be captured using variation of just three qualities.

This is remarkable. As there are the three different types of wavelength-selective cone cells in the human retina, color really does possess a three-dimensional structure (that’s why screens display colors as a mix of red, blue and green).

The appropriate abstract geometry to represent differences between colors is still a question of active research today. The problem was that Grosseteste’s qualities of greatness, clarity and purity had no obvious mapping onto red, green and blue. If only we could have given him a standard color chart to comment on.

Delightfully, there is such an eternal color chart: rainbows are the same yesterday as today in all their variations of angle, raindrop sizes and solar illumination. And these three natural “rainbow co-ordinates” are just the ones Grosseteste uses to describe their color.

After considerable calculation of the spectral features of all possible rainbows, we projected them into a standard 3D perceptual color space developed by vision scientists in the 20th century. We found that our vision scientist of the 13th century had indeed recognized that rainbows create a way of mapping this space, with the beautiful twist that they generate a new “double-spiral” co-ordinate system for color-space (see image above).

It feels like a collaboration across the centuries, but the project also affirms the sense that deeply interdisciplinary research takes us into our academic core.

The authors presented their work on Grosseteste today at the Cheltenham Science Festival.

By Tom McLeish, Professor of Physics and former Pro-Vice-Chancellor for Research at Durham University, Giles Gasper, Senior Lecturer in Medieval History at Durham University, and Hannah Smithson, Associate Professor in Experimental Psychology (Perception) at University of Oxford. This article was originally published on The Conversation. Read the original article.