Scaremongering Suncreen: The Myths And Why They're Wrong
By The Conversation | January 7th 2020 02:30 AM | Print | E-mail

Many people are reluctant to use sunscreen, even though it’s an important element in preventing the skin cancers that affect about two in three of us at some time in our lives.

The Cancer Council says myths about sunscreens contribute to this reluctance. Here are 4½ sunscreen myths and what the evidence really says. Confused about the ½? Well, it’s a myth most of the time, but sometimes it’s true.

Myth #1. Its ingredients are toxic

If you google “toxic sunscreen”, you get more than eight million results. So people are clearly worried if it’s safe.

However, there’s little evidence of harm compared to the large benefits of sunscreens, which are highly regulated in Australia.

There is evidence large amounts of some sunscreen components can act as hormone disruptors. But the amounts needed far outstrip the amount sunscreen users are actually exposed to. 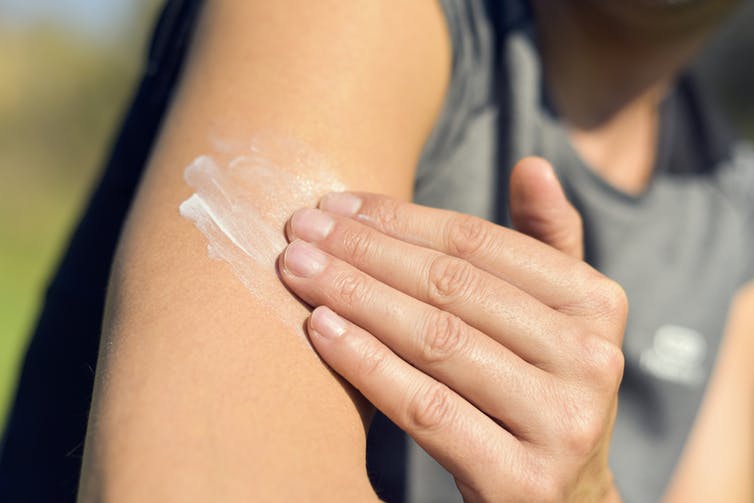 Some ingredients can act as hormone disruptors. But the amounts needed far outstrip the amount sunscreen users are actually exposed to. from www.shutterstock.com

Some people have also been alarmed by the US Food and Drug Administration (FDA) announcing further testing of the sunscreen ingredients avobenzone, oxybenzone, octocrylene and ecamsule. This was after a study showed their concentrations could reach over 0.5 nanograms/mL in the blood.

This experiment involved people thickly applying sunscreen to parts of the body not covered by a swimsuit, four times a day for four days in a row. In other words, this is the maximum amount you might apply on a beach holiday, and considerably more than you would wear on a day-to-day basis (unless you work in your budgie smugglers).

However, there’s no evidence these concentrations are harmful and the further testing is just a precaution.

The FDA recommends people continue using sunscreen. If you still feel uneasy, you can stick to zinc oxide and titanium dioxide sunscreens, which the FDA says are “generally recognised as safe and effective”.

That leads us to another common concern: nano-sized zinc oxide or titanium dioxide in sunscreens. Nanoparticle forms of these UV filters are designed to make them invisible on the skin while still keeping UV rays out.

Human studies show they either do not penetrate or minimally penetrate the stratum corneum. This is the upper-most layer of the skin, where the cells are already dead and tightly packed together to protect the living cells below. This suggests absorption and movement through the body, hence toxicity, is highly unlikely.

Many Australians are concerned using sunscreen might lead to vitamin D deficiency. The idea is that sunscreen would block the UV light the skin needs to make vitamin D, critical for bone health.

However, you need far less UV than you think to make the vitamin D you need: only one-third of the UV that causes a sunburn, and less than you need to tan.

Tests on humans going about their daily business generally show no vitamin D differences between people who use sunscreen and those who don’t.

Myth #3. It’s pointless. I already have skin cancer in my family

Genetics and family history do play a role in many melanomas in Australia. For instance, mutations in genes such as CDKN2A substantially increase a person’s melanoma risk.

However, sun exposure increases melanoma risk on top of any existing genetic risk. So whatever your baseline risk, everyone can take steps to lower the additional risks that come with sun exposure.

It’s true that sunburns in childhood seem to have a disproportionate effect on the risk of melanomas and basal cell carcinomas. But squamous cell carcinomas are more affected by sun exposure over the years.

Regular sunscreen use also puts the brakes on skin ageing, helping to reduce skin thinness, easy bruising and poor healing that older skin can be prone to. And of course, getting burnt feels terrible at any age.

This one’s only half a myth. Many people say they have an allergic reaction to sunscreen but only about 3% really do.

Often, people are just sunburned. They thought they were well-protected but simply stayed out in the sun too long, or didn’t reapply sunscreen often enough.

Your sunscreen might also be out of date. Sunscreen eventually breaks down and loses its effectiveness, faster if you store it somewhere very hot, like a car.

Alternatively, you may have polymorphic light eruption, a condition where UV light alters a skin compound, resulting in a rash. This can be itchy or burning, small pink or red bumps, flat, dry red patches, blisters, or even itchy patches with no visible signs.

Fortunately, this condition often occurs only on the first exposure during spring or early summer. Keep out of the sun for a few days and the rash should settle by itself.

If none of those causes fit the bill, you may indeed have an allergy to some component of your sunscreen allergic contact dermatitis), which a dermatologist can confirm.