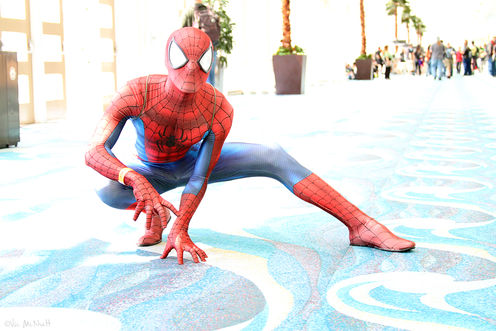 Spider-Man's breakfasts must be unreal levels of eggs. warriorpoet

By Mark Lorch, University of Hull

While stuck in a hotel room I got sucked into watching the 2002 "Spider-Man" movie. And it struck me that Peter Parker must have an enormously high-protein diet to generate all that spider silk he goes through. So being the geek that I am, I wondered what his protein consumption has to be to sustain his villain-beating lifestyle.

I think we can work it out with a bit of school-level physics, maths and some basic biochemistry. We will need to work out the strength of Spider-Man’s silk, calculate how much force Spider-Man would exert on the silk and then figure out how much and what kind of protein will be needed to enable Spider-Man to do his stunts.

Let’s assume Spider-Man produces silk that has the same characteristics as dragline silk produced by the European garden spider Araneus diadematus. That means it ought to have tensile strength – which is the largest stress that a material can withstand before breaking – similar to that of a piano wire.

A piano wire has the tensile strength of 1.1 billion Pascals. Pascals is a unit of measure for pressure, which is force per unit area.

According to Marvel’s directory, Spider-Man weighs 75 kilograms. Applying Newton’s first law, we can figure out the downward force that  Spider-Man exerts. It would be mass times the Earth’s gravitational acceleration, which works out to be about 735 Newtons.

These two values allow us to calculate the cross-sectional area of spider silk by dividing the force exerted by the tensile strength of the silk. Without going into the tiny calculations, it turns out that Spider-Man  could hang from the ceiling on silk that is less than 1 millimeter thick.

Now we need to figure out how much volume this total silk fiber would represent, if Spider-Man's pre-lunch world-saving session requires 100m of it. Silk is slight heavier than water, which means that 100m of the wire would weight about 87 grams.

There is about 6g of protein in an egg. So it looks like Spidey only needs about 15 eggs for breakfast if he plans to use 100m of silk. That’s not too bad. But spider silk consists predominantly of a protein call fibroin. Proteins are made from different amino acids, and fibroin is about 42% glycine. While egg consists of just 10.7% glycine and serine (I’m counting serine because it can be easily converted to glycine). So really Spidey needs to consume four times more egg protein than the silk protein he plans to use. So actually he needs 60 eggs for his 100m of silk.

That’s not really the end of it either. After all what happens if he leaps from a building to save a falling Mary-Jane and deploys his webslingers to save the day, as he does about halfway through the movie.

In the scene, Spidey leaps from the balcony and falls for seven seconds before his silk starts to arrest his fall. He has caught M-J so let’s say their combined weight is 125 kg. How much silk is he going to need here?

From the time of Spidey’s fall, we can calculate that he fell about 240m (wow, that’s one high balcony). Plus, assuming the silk stretches to its maximum, a stopping distance, it will be a fall of about the height of the Eiffel Tower. The impact force on the silk rope as they slow down would be about 35 times their weight.

Which is about six times greater force than when Spidey is just hanging around on the end of his line of silk. But taking into account the length of the fall (240m) and the extra force, he will need 1.3 kg of silk to catch his fall.

So I reckon he must have had about 900 eggs for breakfast that morning, just to have enough silk for that one scene.

Mark Lorch, Senior Lecturer in Biological Chemistry at University of Hull,  does not work for, consult to, own shares in or receive funding from any company or organization that would benefit from this article, and has no relevant affiliations.This article was originally published on The Conversation. Read the original article.