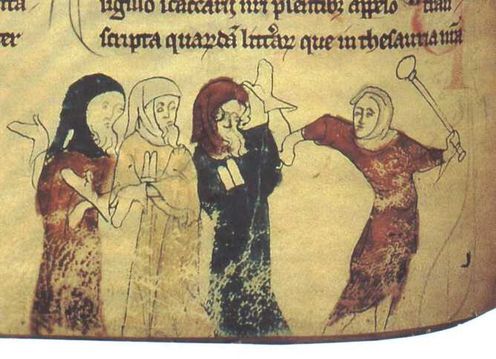 Instead of dying out, Anti-Semitic myths have withstood the test of time.

800 years ago, a monk named Thomas of Monmouth wrote a bogus account of the life of St. William, a Christian boy supposedly abducted by “the Jews” of Norwich.

A boy – “like an innocent lamb” – is lured into the Jewish community, bound, and tortured in a horrific fashion that mimics the torture of Jesus in the Gospels. William is crucified, stabbed in the side, and dies. Thomas tells us the boy is inducted into the ranks of martyrs.

This story should be a footnote for historians, but the tale of William – written decades after the events it claims to describe, by an author considered foolishly credulous by his contemporaries – lives on.

And it is just one of many persistent and pernicious anti-Semitic fictions. The start of a dangerous fiction. Cambridge University Press

There is something particularly troubling about the so-called “ritual murder” or “blood libel” accusations, spread after Thomas wrote about William. Later stories explained the motivation behind these murders: Jews, Christian authors wrote, murdered children to use their blood in Passover matzo.

The accounts begin in England and spread throughout Europe, following a predictable pattern. They are clearly based on one another, sometimes with virtually nothing changed but the names and places. To a skeptic, this looks like clear evidence of fabrication.

To a believer, medieval or modern, this looks like evidence for an ancient, systematically orchestrated program of murder.

This is all well documented, and the grim work of reading about it is part of the research for my next book. However, I was not prepared to stumble across evidence that the myth remains alive and well on, of all places, a Facebook page. The page is titled “Truth About Jews”.

I’d recommend you not to look it up, since this will bring the page more views, and give those who run it a sense of greater popularity. It claims (somewhat ungrammatically):

According to numerous testimonies throughout the human history, the Jews kidnap non-Jewish children or young adults and subject them to very slow and painful ritual murder by inflicting usually 33 non-mortal wounds, letting the blood dripping till the victim dies, collecting the blood, soaking with it rags, letting the rags dry, burning them and adding the ashes to ‘matzah’.

Many people (myself included) have reported this page to Facebook, which has persistently refused to remove it, even though Facebook has a “Community Standards” policy against hate speech. A medieval historian started a MoveOn.org petition. The “ritual murder” tale, first told in ink on parchment and now in digital text, is among the most venerable of “zombie lies.”

The term, popularized by Paul Krugman and Rachel Maddow, among others, refers to lies that have been repeatedly exposed and yet continue to lurch onward, influencing how people think and act long after the lies should have fallen down dead. The grandest myth of all

If this issue were confined to an unpopular page on a social media site, there wouldn’t be much of a problem, but it is a pervasive accusation, used against people and communities throughout the world, at times by those directly engaged in conflict with Jewish groups, or with Israel.

“Ritual murder” accusations are part of a larger myth, invariably presented as “the hidden truth” about the evil schemes of shadowy “international Jewish leaders.” These tales are commonly referred to as the Protocols of the Elders of Zion.

The Protocols – the grandest of anti-Semitic tales – are purported plans for a Jewish conspiracy to run the world through shadow-governments, control of international banking, and so on. These are familiar claims, at least in part because Henry Ford published them in his newspaper, The Dearborn Independent, and reprinted them as The International Jew: The World’s Foremost Problem. The Protocols are rooted in texts such as the Life of William, where, already in the 12th century, there are assertions of an international Jewish conspiracy. The narrative was central to Nazi propaganda, but also to recent invective, such as Glenn Beck’s 2010 “two-day tirade against George Soros” (which I wrote about here).

The history of the forgery of The Protocols has been fairly well documented, but this has not slowed their spread. Indeed, like “ritual murder” claims, The Protocols seem to have been revived by the Internet, where they appear again and again, often asserted as fact. The first page of the Google search results for “protocols of the elders of zion” – in part driven by user clicks – alternates between articles that propagate the myth and those that debunk it.

Indeed, there have been responsible efforts to debunk the myth since at least the 13th century, when Pope Gregory X wrote against it. The blood libel is still told and retold, and The Protocols are still read as if they contained truth. We live in a moment when anti-Semitism seems ascendant to many, or is perhaps being revealed after a period when it was largely underground, filling up the anonymous comment threads of the Internet. Now, we see protests in the streets of Europe, and a resurgence of long-dead chants.

Protesters in Belgium and France have revived “Death to the Jews!” while Germans have resurrected “Gas the Jews!” In London, pro-Palestinian protesters have shouted “Heil Hitler.” Rioters have thrown rocks through windows of Jewish-owned businesses, and even burned some down.

Newsweek devoted a cover story to the potential exodus of European Jews, some of whom are so concerned with rising anti-Semitism that they are considering leaving their home countries.

Most fictional monsters have bodies. This is how heroes can kill them. But zombie ideas like these are more resilient than their fleshy namesakes – and more dangerous.

Asa Simon Mittman, Professor of Art History at California State University, Chico, has received funding from the International Center of Medieval Art, the Samuel H. Kress Foundation, the American Philosophical Society, and the NEH in conjunction with this research.