News Staff
In 2001, after the US World Trade Centers were destroyed in a terrorist attack, assaults on middle-eastern buildings and people in San Francisco went up. Yet the middle eastern people attacked were Jewish, not Muslim. A common sentiment among intelligentsia was that the attacks were due to Israel being created by the United Nations in 1948.

Anti-Semitism has gotten worse rather than better since, despite governments creating laws against hate crimes, according to the 28th Annual Report on Antisemitism Worldwide.

The new report identifies a dramatic increase in antisemitic incidents in almost all countries with large Jewish populations. In most countries the increase was also substantial compared to 2019, before COVID-19 restrictions were imposed. 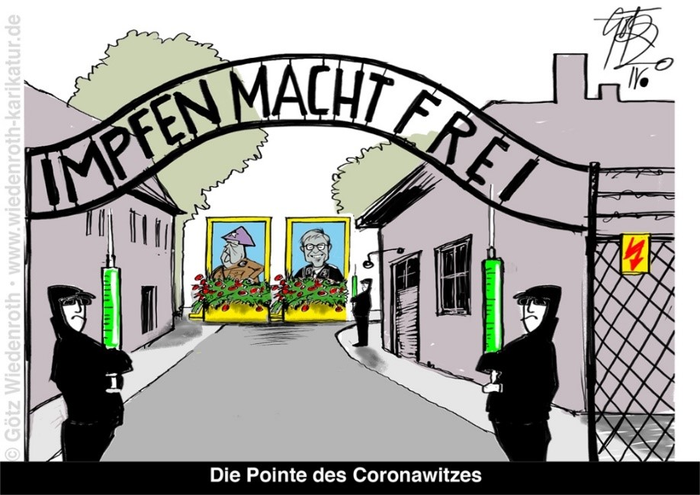 The entrance to Auschwitz with the words 'Vaccination liberates' in place of 'Work liberates'
Credit:
https://www.wiedenroth-karikatur.de/02_PolitKari200417_Corona_Pandemie_S...

It isn't just the radical left, though. This century it became common in Europe for retailers to place special labels on goods from Israel, to discourage those who side with the Arab countries that denied the creation of the countries of Palestine and Israel from making purchases, but now the radical right due to conspiracy theories generated by the COVID-19 crisis.

And politics plays a part. When Hamas began resurgent terrorists attacks in May of 2021 the response by Israel led to a sharp increase in antisemitic incidents. Though many countries showed increases, the dramatic rises were in Germany, Canada, UK, Australia, and the US.

Lockdowns during the pandemic contributed. With people stuck at home glued to screens, among many conspiracy theories promoted on social media was similar to the 9/11 attacks - Israel did it. Iran spread antisemitic propaganda targeting Europeans through social media and and even fund specific channels, much like Russia did with western environmental groups who oppose modern food and energy in preparation for their takeover of Ukraine. The result was that the US recorded 251 antisemitic incidents in just three weeks, during the Israel-Hamas conflict in May of 2021.
News Articles
More Articles All Articles
About