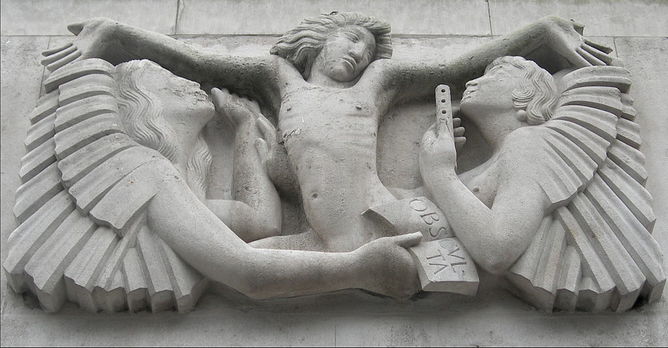 Ariel between Wisdom and Gaiety. Wikimedia

My advice to the BBC: ignore the House of Commons Culture, Media and Sport committee report on your future at your peril.

Over the past 30 years the BBC has largely been the author of its own misfortune. While the journalists and program makers have continued to create and inform, executive leadership has been busy digging the corporation’s future grave.

It’s easy to dismiss the media committee’s various incarnations as a small bunch of parliamentarians washed up from ministerial sackings and twilight political career grazing. But I believe the reports it produces give a bracing and independent wake-up call to anything it investigates.

What the Future of the BBC says is essentially this: your purpose and most of what you do is worthy, vital, and much-loved, great this and great that, but …

The conjunctive “but” in British politics is the equivalent of a mini-stroke that might make you slur your words for a bit, or a small-scale earthquake that will leave some dogs barking and one or two chimney pots toppling to the ground.

But what happens next does not bear thinking about.

Wake up Auntie, times are changing

In the same way that there are very few people under 30 buying any kind of newspaper, fewer and fewer people under 30 are paying the BBC license fee, or have any wish to do so. Fewer and fewer are consuming BBC media programs as live. When they watch or listen again it’s in a new multimedia topography that resents and will not tolerate those unpleasant and threatening letters about not paying the license fee.

My understanding of the younger generation, even up to the age of 40, is that they think the criminalizing of people who don’t pay is utterly immoral. The generation of under 30s, apart from a lucky few in wealthy families, faces a future of debt obligations and credit control.

They are not going to give a meal ticket to BBC executives and “talent” to snuffle £150,000 to £500,000 per annum when, after five years of higher education and interning, a 23-year-old would be lucky to earn £20,000 and find somewhere to live in a London room-share.

Financial insecurity and anxiety is by no means the curse of the young. It’s spreading exponentially to all classes and ages as quickly as distribution of wealth is shrinking. Meanwhile the BBC is a bit like a heroin addict in the advanced stages of an addiction illness. There are no friends and family left to either lend to them, or for them to steal from.

Associated newspapers and News UK publications have always been hyper-critical because ideologically and commercially they are rivals and competitors. But the committee’s observations about the BBC blundering into all kinds of non-broadcasting markets has meant that it is long past the tipping point of having more enemies than friends.

The committee acknowledges the value of the BBC’s “continuing importance as a provider of impartial news and its capacity to bring the country together where its output remains universally available”. But this is constantly hindered because what the BBC has lacked at the top is the imagination always expressed by those at the bottom.

Towards a new funding model?

The committee report offers many interesting solutions. It’s argued that “the German model of a broadcasting levy on all households is our preferred alternative to the TV license”. Does the BBC have a clear strategy on what would work as a replacement for the license fee?

The committee suggestion talks of a levy on all households which would obviate the need to identify evaders and provide a fairer way of ensuring those people who use only BBC radio and online services contribute to their costs. It works in Germany which has a thriving public radio and television system alongside the commercial sector.

The committee also quite rightly observes:

At a time when countries like Russia and China are significantly increasing their investment in global media outlets, including services aimed at the UK, we believe that the World Service has an increasingly important role in what is a global information war.

The UK has begun to lose this war because of a disastrous decision to destroy the separate and independent role of the World Service in partnership with Foreign and Commonwealth Office funding. The leaving of Bush House, being absorbed as some kind of expatriate refugee in the national broadcasting edifice and dependent on license fee charity has inevitably resulted in lost power and independence.

The committee observed: “Given its new funding and oversight arrangements, we fear the importance of the World Service could be diminished.” It’s not a case of could be. It has been.

In 2009, James Murdoch’s MacTaggart lecture accused the BBC of mounting a “land grab” with its online and regional news services “dumping free, state-sponsored news on the market” making it “incredibly difficult for journalism to flourish on the internet”.

He was right – and the report suggests: “We believe there must be a more symbiotic relationship between local media and the BBC, where each benefits from the other.”

The committee was very blunt when it stated the BBC “must not expect to receive others' news content without providing something in return”.

This is an invitation to dance, not to charge at each other with elbows splayed out.

Wouldn’t the BBC be an inspiration in this context? Why should the riches of drama and cultural programming, remain sealed in the BBC’s own territory? The establishment of a Public Service Broadcasting Commission, could ensure substantial investment in innovative and artistic new writing by seeding sound and visual arts projects in the community and independent broadcasting sector.

What is at stake is £4 billion of annual funding for news, entertainment and cultural communication. Now that’s a prize that should court humility not the boasting and cynicism that sometimes comes with greed and mediocrity.

The BBC needs to pick up on the spirit of the regular adjectives and adverbs used in the report: bold, alternative, wider, fairer, better, and perhaps focus on the regular nouns: transparency, plurality and efficiency. If the BBC is something we all pay for, perhaps the money it has should reach more of those it has never or not so well served.

Perhaps it should be investing more in those 23-year-olds in one bedroom flat-shares who can make exciting programmes on their laptops and smartphones for audiences the BBC is completely unaware of.

By Tim Crook, Reader in Media and Communication (Goldsmiths), Visiting Professor of Broadcast Journalism (Birmingham City University) at Goldsmiths, University of London. This article was originally published on The Conversation. Read the original article.