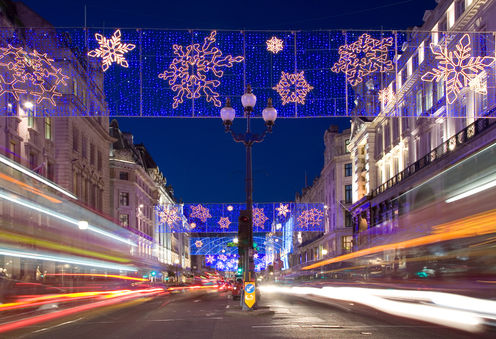 Magic and sparkle? Diliff, CC BY

By Isabelle Szmigin, University of Birmingham

As well as the tell-tale signs of decorations going up, the rolling out of Christmas advertisements has become a key moment for getting us all in the seasonal mood. And the competition to capture the festive spirit – and the customers that come with it – is fierce.

Television viewers would have seen their screens packed with Christmas spots from major retailers recently. Debenhams, John Lewis, Iceland and Tesco have all aired their Christmas ads and John Lewis has continued its tradition of tugging at viewers' heartstrings with its story of young boy Sam and his penguin, Monty.

John Lewis understands that Christmas is about children, nostalgia and above all storytelling. This is what all their ads (not just at Christmas) have done. They were the first to do a timeline advertisement, with their “Always a Woman” campaign showing one life story from child to grandmother all framed by John Lewis products.

Their Christmas ads have all been mini-narratives with a heart-warming conclusion, whether it is the little boy impatiently waiting to give his parent their gift or the 2012 snowman fighting against incredible odds to bring his snow lady friend a hat and gloves. This year they have combined the sweet looking child with cute animation and a backing track by artist Tom Odell covering John Lennon’s "Real Love".

Tapping into the Christmas spirit

These advertisements aren’t focused on selling products as others do – such as Iceland offering low prices on Christmas fare – they are selling a feeling. In this case it is how we feel about our loved ones, whether they are children or penguins, and that is what will get shoppers into the store or online to find that perfect present.

At the time of this writing, Sainsbury’s contribution was rumored to be based on the 1914 Christmas Day Truce, where British and German soldiers dropped their weapons to play football with one another. Cynics may wonder what this has to do with food shopping, but again I would say success in these campaigns is more about capturing the mood of the moment. Done well, this has the potential to be very powerful.

Done wrong, however, companies can shoot themselves in the foot with their Christmas ads. For example in 2012, Asda received more than 600 complaints for its spot that showed a harassed mum singlehandedly shopping, organizing, cooking and clearing up her family’s Christmas. The complaints included reinforcement of stereotypes but also that the ad could be offensive to single fathers, fathers who did contribute, and families that had lost mothers. Though they were not upheld, they show the importance of tapping into the right pulse to get the Christmas ad right.

While lots of products, notably perfume and alcohol, increase their spend in the lead-up to the annual present buying bonanza, it is the big retail stores and supermarkets that will be fighting it out on our screens for a share of the Christmas spend. With sales in December as much as 40% higher than the January to September monthly average, the Christmas sales period is incredibly important to retailers.

And there is added impetus to get people’s attention now that companies must compete with new online retailers, convenient to time-pressed consumers, for a share of the market in a limited time period. All the more reason to make their advertisements memorable and iconic. Christmas advertisements are also a great opportunity for companies to invest in their brand – to convey what the company stands for by playing out its values at a time when we are particularly receptive to the consumption message.

But these ads don’t come cheaply. All of these executions run up large bills – usually over £1 million – and then there is the buying of air time between popular shows, which runs into more millions. This is why it is so important they get them right.

A good advert will not only win customers over to the brand, but get them talking about it and, all-importantly, sharing it with their friends across social media.

Sold out Monty for sale on eBay.

And then, after all, there is always the product to think about. John Lewis have cleverly introduced a range of merchandise to support their ad including pyjamas, onesies and soft toy replicas of Monty and his girlfriend, Mabel.

These, despite being priced at £95 have not only sold out, but are being resold on ebay for much more.

In past years the must-have toy that sells out in November has been a regular news story, so not only have John Lewis scored on the nostalgia side they have got us coveting a furry toy too. Shoppers will no doubt be thronging John Lewis for a little bit of Monty in whatever form they can get him.

Isabelle Szmigin, Professor of Marketing at University of Birmingham, does not work for, consult to, own shares in or receive funding from any company or organization that would benefit from this article, and has no relevant affiliations.