December 25, as we all know, is Jesus Christ’s birthday, a Christian celebration in which the myth of three kings who travelled far and wide to give gifts to the “new born king” inspires the modern Christian tradition of gift giving. Early gifts used to be fruits or nuts, but as this act took on more importance, gifts became larger and less modest, and were placed under a tree.

Midwinter has been a period of festivities for millenia, but Christmas as we know it today has its origins in Victorian Britain. It was in Victorian times that the idea of Christmas as a family holiday, with gift giving, a tree, and an intimate dinner became central to this celebration. Britons traditionally celebrate Christ’s birth with a religious mass.

Hence the words “Christ” and “mass” coming together to form the word Christmas. 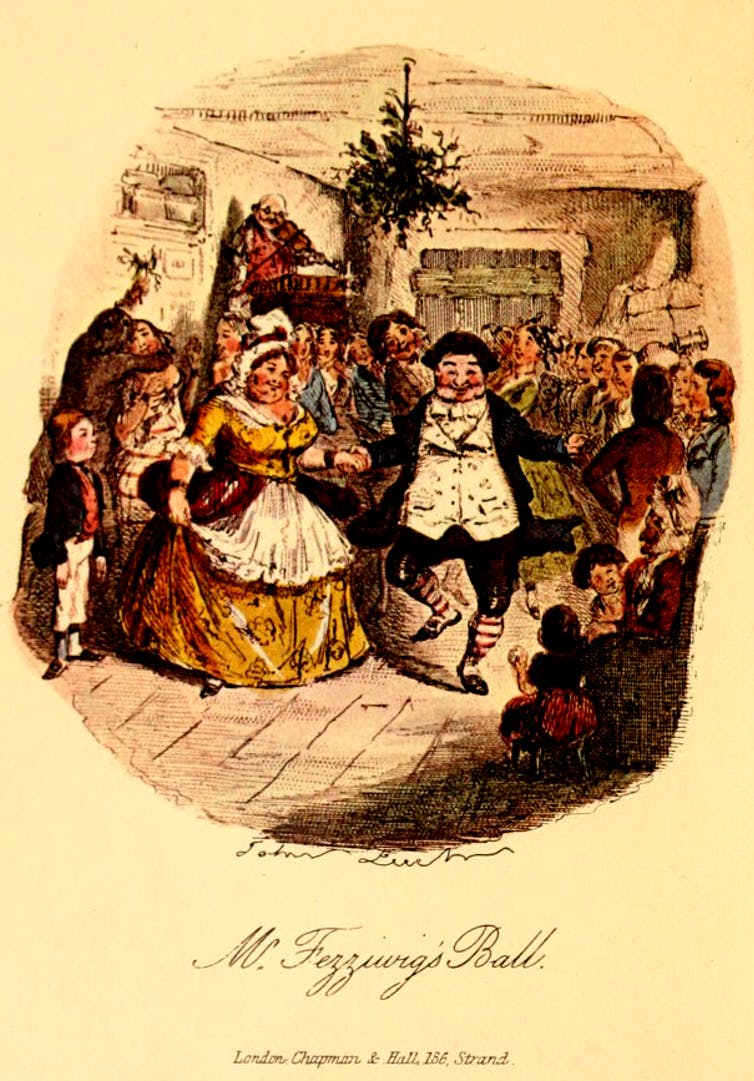 From A Christmas Carol by Charles Dickens, 1843. Wikimedia Commons

Charles Dickens defined the British Christmas with his story, A Christmas Carol, which linked Christian values with the idea of sharing and a “festive generosity of spirit”. His book helped popularise what was already occurring in Britain, and is credited with spreading the traditions of the festival. His book sold out in its first printing in 1843 and set the tone for the mid-Victorian revival of the Christmas holiday by reflecting and reinforcing the Dickensian vision of Christmas.

An early English folkloric tradition associated with this holiday celebration is “Old Father Christmas”, who can first be found in the mid-17th century as a symbol of good cheer. In the early part of the 19th century, he was depicted as a skinny man who promoted drinking and partying during the holiday season. But by 1874, Father Christmas had evolved into a round jolly man wearing red and green fur lined robes and holly on his head.

This early version of Father Christmas was mostly associated with the adult celebration, but during the Victorian times with their new focus on the family, Father Christmas began to be linked to the idea of giving gifts. Images of Christmas were reproduced in popular culture through mass mediums of newspapers; magazines and theatre. These images visually defined Christmas and how it should be celebrated. 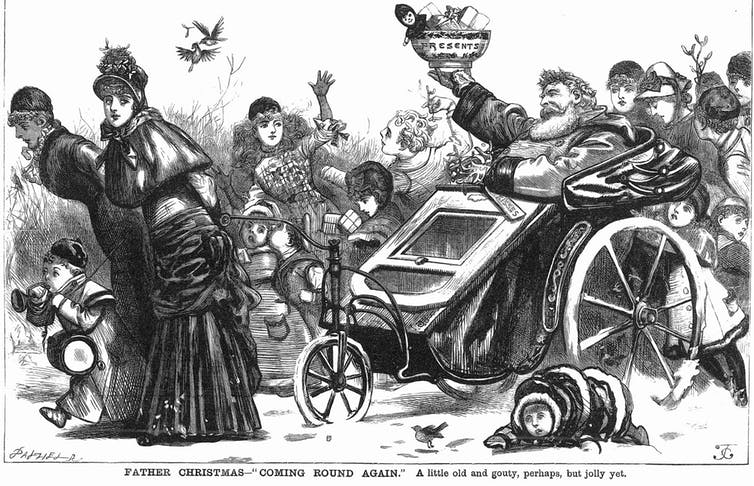 By the 20th century, mass advertising became commonplace. Consumer messages were now broadcast to the public through billboards, magazines, radio, and later the moving image of television. Mass advertising was what allowed the slowly developing idea of Christmas as a time to give gifts to go mainstream, and eventually, to define Christmas itself.

Businesses realised that Christmas could be a brilliant money spinner. Seasonal advertisements began to emphasise the act of “giving gifts” as a major part of Christmas time by having Father Christmas physically display branded products to a growing consumer market. The link between this Christmas icon and consumer goods was made very obvious in advertising, as illustrated in this ad from Newball&Mason to sell an assortment of alcoholic spirits. Advertising took the fable of Father Christmas and linked him with physical brands, turning myth into a reality, something that could be touched, smelled, and experienced.

In 1937 Coca Cola introduced the world to a simplified and more accessible version of Father Christmas dressed in Coca-Cola red, this time without the traditional cape. In their ads he was named Santa Claus, in accordance with American tradition. Santa Claus became a personification of the brand and gave the brown liquid a personality and a face, associating the drink with one of the happiest yearly western celebrations. Coke repeated the same message every December, and the name “Santa” slowly replaced “Father Christmas” in popular parlance in the UK too. This led to the red suited man becoming the icon most associated with Christmas.

In Britain, brands continued to express the idea reflected by Dickens that Christmas was a time to celebrate and unite the family. Queen Victoria and Albert celebrated with a Christmas tree, and slowly the concept of putting presents under a decorated tree took hold. In the 20th century the idea of Father Christmas bringing presents and leaving them under the tree became popular, thereby linking the concept of Santa delivering presents with the joy of sharing.

One 1965 ad selling tape recorders, for example, shows a white British family opening presents on a Christmas morning recording a child playing on his new drum. This image attempts to convince the consumer that they can demonstrate “love” through the act of giving gifts, an idea that still has real traction today.

Modern Christmas advertising has moved on again in order to reflect our multicultural and ever more secular societies. In the latest Selfridges television ad, “A Christmas for Modern Times”, a multiracial group of friends are shown celebrating “future fantasy” of Christmas. This “chosen family” share gifts, food and drink with one another, and then go dancing in a nightclub. The addition of going to a disco to continue the Christmas celebration reflects ever newer forms of cheer and highlights just how far the idea of Christmas is now removed from religion.

Thankfully, the white nuclear family casts are now, mostly, consigned to historical Christmas ads. The 2019 John Lewis ad “Excitable Edgar” and Ikea’s #WonderfulEveryday both feature multiracial casts celebrating Christmas together. These visual representations of Christmas signpost the holiday’s evolution from a white one to an inclusive one. Christmas is no longer a Christian holiday – but a time to be celebrated by everyone.

This is of course something we should be thankful for – but now that it has been replaced by a religion of conspicuous consumption, it’s big business which will be most pleased of all.

By Carl W. Jones, Senior Lecturer, School of Media and Communication,University of Westminster. This article is republished from The Conversation under a Creative Commons license. Read the original article.