We don’t need to be Christian to celebrate Christmas. That’s been true for a long time. We don’t even need to be religious. Considering the commercialization of the holiday, that might be an advantage.

But there is no way to get around the religious iconography. Jesus, nativity scenes and Christian symbols are everywhere. So how do you explain this to your children – or someone else’s children – if you and they are not religious?

Explaining Jesus to your child means explaining God. But when you pull that thread the story unravels to reveal the many versions of god that make up mainstream religion. So we have at least two distinct Christmas problems: the question of God’s existence, and which god might we be talking about.

Christmas is secular as much as religious But the question of Christmas (a bit like the question of Easter) is a more specific one. This particular holiday is a combination of secular celebration of good will and deep religious significance.

These two perspectives can of course co-exist, and for many the celebratory and the sacred compliment each other. But nowadays, neither of these is really necessary for the other.

It might be tempting for atheist parents to just separate their Christmas from Christian celebrations altogether: some people are religious, some are just having a good time. But it’s hard to totally avoid religious references even in secular interpretations.

Apart from the iconography mentioned earlier, our carols are full of references to shepherds, saviors, angels and virgins. Many secular people love to belt these out each year during Carols by Candlelight or other communal gatherings. 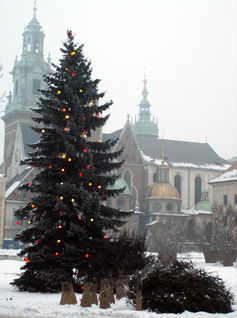 (Though it’s not all one way - Frosty the Snowman and Jingle Bells are as much a part of Christmas as Away in a Manger and Silent Night.)

Midwinter festivals are a very old pagan tradition, and the inclusion of nature symbols such as Christmas trees and mistletoe add another cultural layer to this holiday.

It’s the historical mix of the Christian, pagan and now secular that makes Christmas so interesting as a modern time of celebration.

Even Santa Claus, originally based on a Christian bishop (and possibly even earlier pagan legends), is now a completely secular figure.

Santa himself, from a secular or religious point of view, is not without problems for the thinking child. Apart from the obvious logistical issues of present delivery world-wide, what about the myth that Santa only brings presents to good children? Does that mean poor children are bad?

How can this be reconciled with the realities of the world, which are far from hidden from our children? If Santa is not bringing presents to children in the Sudan, there are some unappealing deductive conclusions to be drawn.

It is a mistake to imagine that these issues fly under the radar of children. They are far more sensitive to issues of justice and fairness than we usually give them credit for.

Understanding Christmas through Santa and Jesus

The very organic mix of the secular and religious in Christmas is perhaps no better expressed that in Bart Simpson’s sentiment,

Haven’t we forgotten the real meaning of Christmas? You, know, the birth of Santa?

For the religious parent, Santa may fall, but Jesus must remain. This can be a bit of a challenge for a child who has had one illusion shattered and is susceptible to a repeat. But for the secular parent once Santa goes that’s about it. All else is historical. So there are two phases of understanding Christmas for children whose parents don’t feel the need to preserve two cultural stories. The first is the Santa phase, in which preserving Santa while contextualizing Jesus is difficult. The second is the post-Santa phase, in which the whole facade crumbles and there is no need to walk on mythological eggshells.

For the former stage, about the only resort is the “some people believe” response; this is a bit tepid – after all, the “some people believe” approach can be equally applied to Santa. The latter, post-Santa stage, should put the onus on the child to develop their own thinking through conversations about the full and rich history of human ceremony, Santa and the Christian Christmas story itself.

It’s hard to imagine a better teaching opportunity for children to understand their cultural heritage than to unpack all that is Christmas. Parents can encourage open inquiry into how the past has influenced our behavior and values in the present, and help their child nurture an appreciation of why we do what we do.

This is not a rejection of the past, nor is it a belittling of it. Rather it makes taking part in Christmas a celebration of what we have collectively gone through to get where we are today.

The true meaning of Christmas is defined through the celebration of all those who have historically enjoyed this time of year. This collective understanding presents an opportunity for children to appreciate the deep cultural history that makes up Christmas.

That is what we should pass on to them.

By Peter Ellerton, Lecturer in Critical Thinking, The University of Queensland. This article was originally published on The Conversation. Read the original article.