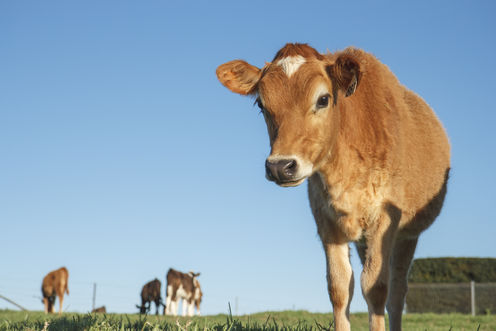 The Australian dairy farming industry is in a state of crisis. Cheap dairy products and fluctuations in both the domestic and global markets have taken a financial toll on farmers. Consumers have rallied to help struggling dairy producers.

But this is only half the problem. The true cost of dairy is also paid by dairy cows and the environment.

Tail-docking and horn removal are routinely performed without pain relief. Lameness is another major animal welfare problem, often the result of environmental pressures, such as tracks, herd size and handling. The average lifespan of a dairy cow is six to seven years, whereas generally cows can live for 20 to 25 years.

One of the most controversial issues is young “bobby” calves. A bobby calf is a newborn calf, less than 30 days old, who has been purposely separated from their mother. Immediately after separation, cow and calf call out and search for each other.

Advocacy groups frequently uncover the routine abuse of bobby calves in Australian abattoirs and challenge the dairy industry to do something about it.

Yet aside from the wider ethical questions over the use and exploitation of animals, farmers are not legally doing anything wrong. This is because the treatment of animals operates in a legal context where animals are considered absolute property.

What’s more, farm animals are exempt from the provisions of anti-cruelty legislation. Codes of practice are practically useless, because they promote low welfare standards and are unenforceable.

As well as systematic welfare problems, livestock farming is, both directly and indirectly, one of the most ecologically harmful human activities. The Australian livestock sector is worth A$17 billion and dairy cattle farming is a A$4.2 billion industry.

In Australia, livestock farming accounts for 10% to 16% of greenhouse gas emissions, with dairy farms contributing 19% of this, or 3% of total emissions. Methane emissions, from digestion and manure, and nitrous oxide from livestock are significant contributors. Globally, the livestock sector is responsible for more greenhouse gases than the world’s transport.

Livestock production accounts for 70% of all agricultural land, including the land used to grow crops to feed these animals. Animal agriculture is a key factor in land degradation, deforestation, water stress, pollution, and loss of biodiversity.

Emissions can be reduced

Just as the energy sector is attempting to transition to low-carbon energy sources to tackle climate change, the agricultural sector needs to transition to an ethical and sustainable alternative.

From the current crisis, there are several opportunities for farmers to seize. Large transitions are possible in land use, production, output and profitability.

Places such as Gippsland in Victoria, which currently produces 19% of Australia’s dairy, have the opportunity for agricultural development based on apples and brassicas, such as broccoli, kale, cauliflower, cabbage, turnip and mustard. Some of these crops are already popular in the region. As a result of climate change and increasing temperatures, some areas will be more suitable than others.

While still in the stages of research, perennial grain crops – which store more carbon, maintain better soil and water quality, and manage nutrients better than annuals – have the potential to contribute to sustainable agriculture. New land uses could also include carbon plantings, biofuels and bioenergy crops. Investing into further research for alternatives to livestock farming is needed.

Some have argued that livestock emissions can be technically mitigated by modifying animal feed, better managing pastures, carbon sequestration and manure storage.

But technical mitigation does not address the endemic animal welfare problems in the livestock industry.

Consumer demand is one of the most powerful strategies to combat animal welfare and environmental problems. Research shows that we must reduce food waste and losses in the supply chain and change our diets toward less resource-intensive diets, such as a plant-based diets. Doing so would cut emissions by two-thirds and save lives. It’s possible to eliminate animal suffering and reduce carbon emissions by reducing and replacing livestock production and consumption.

Alternatives to dairy milk include soy and almond milk. Soy milk is nutritionally comparable to dairy milk and has a significantly smaller environmental footprint.

Policy initiatives also need to address these issues. The Food and Agriculture Organization’s Livestock’s Long Shadow report recommends a policy approach that correctly prices natural resources to reflect the full environmental costs and to end damaging subsidies. In the interim, higher taxes on meat and other livestock products will be necessary to improve public health and combat climate change.

Denmark, for instance, is considering proposals raise the tax on meat, after its ethics council concluded that “climate change is an ethical problem”.

Governments everywhere need to have a transitional plan for livestock producers and workers – one that helps to cultivate the ethical and sustainable agricultural endeavors of the future.