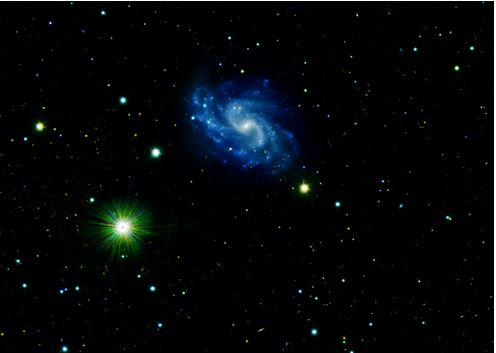 We know that our universe has already lived through great number of exciting phases.

But new research released overnight shows the universe has long passed its peak and is slowly but surely dying.

The research was presented at the year’s largest gathering of astronomers at the International Astronomical Union’s General Assembly in Hawaii.

Before we start writing any obituaries, let’s have a quick recap of the good times.

When the universe was less than a second old and more than a billion degrees Celsius, it was hot enough for exotic particles to freely pop in and out of existence.

As the universe expanded, it cooled and was no longer able to produce hugely energetic particles. A representation of the evolution of the universe over 13.77 billion years. NASA / WMAP Science Team

After a few seconds, the universe was a sea of protons and neutrons, and after a few minutes it was mostly a dense fog of hydrogen and helium. In terms of building more complex matter, that was pretty much the end of the action for 400,000 years.

Then, quite suddenly, matter and radiation were decoupled and photons of light were able to free-stream across the universe for the first time. This is all very exciting for cosmology, but something important had also happened to the hydrogen and helium: it could now hold onto electrons and create neutral atoms.

This is another step on the path to making you and me: we need neutral hydrogen in order to form molecular hydrogen, we need this to efficiently cool pockets of gas that collapse rapidly to form the first stars, and we need stars to form the heavy elements such as carbon and oxygen that are the building blocks of life.

By this stage the universe was a few hundred million years old, and it was now busy heating itself back up as these first stars irradiated the surrounding material.

These stars were blowing themselves apart and dumping large quantities of heavy atomic species into space, producing many of the heavier elements we see today. Some of them may also have collapsed into black holes, sowing the seeds of some of the most massive galaxies that exist in the present day universe.

After this early phase of forming the first stars, we began to see the first structures that resemble modern galaxies, but in a very messy and violent form. For the next few billion years galaxies smashed together to form more massive systems and star formation was rapidly turned on and off.

This activity continued until the universe was about 3 billion years old, a period we know as the peak of cosmic star formation. So the universe got most of the exciting stuff out of the way really early on. A top down view of the major 3D redshift surveys of the local universe with the Earth at the centre. Each dot represents a single galaxy, and the direction shows their location on the sky. The distance from the centre shows the light travel time from Earth. Here we see the most recent 5 billion years of the universe, which has taken thousands of nights of observing on some of the most massive telescopes to construct. ICRAR/GAMA

What has it been doing since then? It is slowly but steadily dying. It is still producing new stars every now and again, but the rate at which old stars are fading outstrips these bright young things.

To exacerbate things even further, about 3 billion years ago a mysterious (and much studied) entity called dark energy began to dominate the energy contents of the universe and accelerate everything apart (measuring this acceleration won Australian researcher Brian Schmidt and others a Nobel prize).

The universe had already started cooling off by this stage, so dark energy arriving on the scene really twisted the knife.

How do we know all of this? Well, we have been building the evidence for a while and careful models of galaxy evolution have already suggested that the universe is fading, but we wanted to directly observe this effect over many billions of years.

In the past few years a large Australian led project called the Galaxy And Mass Assembly (GAMA) survey invested huge effort into measuring most of the energy output from stars.

We had to observe nearby galaxies from the far-ultraviolet (where young stars produce much of their light) through the optical and the near-infrared (where most stars peak in energy output) all the way into the far-infrared (where star light absorbed by dust is re-emitted). GAMA has been able to measure this huge span of radiation over the past 5 billion years for almost 200,000 galaxies, categorically establishing that the energy output of stars in the universe is winding down.

The end of the universe?

The good news is that the stars made to date will still last many billions of years yet (including our own sun). Some of the smaller stars should keep shining for longer than the current age of the universe.

There are questions over what exactly the dominance of dark energy will mean in the long term, with some of more exotic theories speculating that it could tear everything apart in a “Big Rip”.

Fly through of the GAMA Galaxy Survey.

Less dramatic, and more likely given our current knowledge, is the theory that the universe will continue to cool forever, and non gravitationally bound structures will steadily move apart from each other. After trillions of years we will only be able to see our own galaxy as the others will have raced too far away. After hundreds of trillions of years no new stars will be made anywhere at all.

The universe will have ceased converting mass into light, and it will be left in almost total darkness. Every once in a while the remaining photons, electrons, positrons and neutrinos will meet and dance, but they will soon continue their solitary journeys. The universe, in any sense that we know it today, will be over.

The phase we are in now could be considered to be the slow death throes of the universe. But on a more upbeat note, this is its Indian summer. After those hectic early days I think we can all agree that it deserves a good rest.

Aaron Robotham is Research Associate Professor&UWA Research Fellow at University of Western Australia. This article was originally published on The Conversation. Read the original article. Top image: A color image of G63349, one of the galaxy's in the survey, created using near-infrared (VISTA telescope) and optical (Sloan telescope) data collated by the GAMA survey. (The bright green object is a nearby star.) ICRAR/GAMA, Author provided