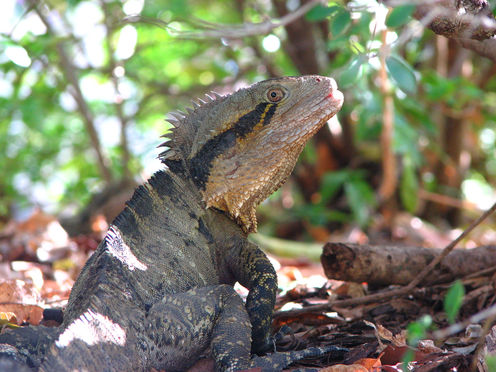 No, it's nothing to do with a reptilian existential crisis – just a name game. Credit: melanie cook/Flickr, CC BY-NC-SA

You have likely been to a zoo at some point and visited their reptile house.

A building where the climate control dial is stuck on the “wet sauna” setting, and filled with maniacal children competing to be the first to press their ice cream covered face and hands on every available piece of clean glass.

Assuming you managed to find some clean glass, and supposing the animals were not hiding from the incessant banging and requests to perform like circus animals, you would have likely seen turtles, crocodiles, snakes and lizards.

But what if I told you reptiles don’t exist.

I am not suggesting that you imagined seeing scaly creatures, but the group of animals we refer to as “reptiles” does not exist – at least not anymore.

It all has to do with our (humans, that is) penchant for categorization. We just love putting things into boxes, and those boxes into bigger boxes. Scientists have even turned this activity into an entire field of biological research, called taxonomy.

Several methods of classification have been used throughout the history of taxonomy. The current, most widely accepted method – cladistics – is considered to be the most objective as it takes into account an organism’s evolutionary history.

The picture below maps out our current understanding of the relationships between land vertebrates. First thing to notice, the label tetrapoda on the left is the base of the diagram, indicating that all species to the right are within the group tetrapoda. From here you can go down each path, labeling each group. Cladogram of tetrapods (land vertebrates). Reptiles as a group exist on different branches rather than all together.

All pretty straightforward – but, this is where the reptile label runs into a problem.

I have circled the group of animals we normally refer to as reptiles. If you trace their paths back, you will arrive at junction [C], the last common ancestor of those groups. So, if we are to consider all animals from junction [C] onwards as reptiles, then we must also label birds as reptiles. We could do this I guess, but it would be redundant.

The group of animals from junction [C] onwards are already referred to as sauropsida.

Hence, reptile is dead. (I suspect Nietzsche will still be quoted more.) The tuatara looks like a lizard, but it isn’t one. Wikimedia Commons, CC BY

An obvious question at this point: if there is no such group of animals called reptiles, then why are there reptile houses at zoos? As you might guess, it has to do with history.

Classification of animals (and plants for that matter) was formalized in the 18th century by Swedish scientist Carl Linnaeus. Linnaeus built his classification system on the way animals looked, in an age when species were considered to be fixed and unchanging.

Then, as with current taxonomical methods, further divided these broad groups into more refined taxonomic categories.

Species of amphibia were divided into two groups:

Reptiles were considered to have feet, with flat naked ears; where serpents did not have feet, laid eggs connected in a chain and “penis double”. That’s right, snakes have a pair of hemipenes. In fact, this last observation is odd since lizards also have a pair. Having feet was clearly the more important diagnostic tool for Linnaeus, otherwise he would have known to put snakes and lizards together.

Linnaeus’ categorization methods meant that many species were incorrectly grouped together. For instance, reptiles comprised turtles, lizards, crocodiles, salamanders and frogs, while serpents included snakes, legless lizards and caecilians. As you can see from our modern branched image above, Linnaeus may have done better just picking names out of a hat – but I suppose that’s always easier with 20/20 hindsight. As naturalists developed new methods of classification, new boxes were created, some species were taken out of one box and added to another.

Since then, though taxonomists have routinely shuffled and revised the groups, and though genetic techniques have given us new insights into the evolution of these organisms, the name has stuck.

I don’t expect zoos will change the reptile house to the “non-avian reptile house” or “sauropsida house” anytime soon. It doesn’t really have the same ring to it.

As for biology texts, though the reptile label no longer relates to an evolutionary group as mammals or birds does, biologists will still use it.

The “reptile” label groups together a deeply fascinating group of animals who are persecuted far too much, researched far too little and likely have many great stories yet to reveal.

Dustin Welbourne, PhD Candidate in Biogeography and Science Communicator at UNSW Australia, does not work for, consult to, own shares in or receive funding from any company or organization that would benefit from this article, and has no relevant affiliations.