When Russian cosmonaut Alexei Leonov conducted the world’s first space walk in 1965, the mission nearly ended in catastrophe. After 12 minutes outside the Voskhod spacecraft, the vacuum of space had caused Leonov’s suit to inflate so much he couldn’t get through the air lock. He was forced to manually vent oxygen from inside the suit to reduce its size and get back onto the ship before the effects of decompression sickness overcame him.

Amazingly, the design of many of the space suits in use today hasn’t changed that much. The Russians still use a variant of Leonov’s one-size-fits-all suit, the Orlan M, and the Chinese use the visibly similar Feitian. And while NASA’s Extravehicular Mobility Unit (EMU) has been updated since its initial development in the 1980s, its primary life support system dates to the Apollo missions of the 1960s.

However, the advent of manned flights to Mars and advances in materials technology could change all this. For space tourism to take off and mankind to step on Mars, we need suits that may look very different to those used today. Engineers are now developing a new generation of space suits that could help astronauts withstand longer periods of time in space and deal with the hazards of exploring other planets. Most space suits are essentially mini spacecraft. Although typically just a few millimeters thick, the suits have to provide life support and protection against the vacuum, temperature extremes and micrometeorites of space. Without this protection, the drop in pressure would cause the body to swell up and lethal bubbles of nitrogen gas to form in the blood.

Suits that maintain a lower pressure, such as the 4.3 pounds per square inch (psi) of NASA’s EMU, make it much easier to move and so are less tiring. This makes a huge difference when spacewalks can last up to eight hours. The downside is this also increases the time an astronaut needs to spend breathing pure oxygen to reduce the risk of gas bubbles forming in the blood.

For its Mars suit, however, NASA is looking at much higher pressure designs such as the soft Z-2 and the hard-and-soft hybrid Mark III. These would effectively “dock” into the spacecraft or Mars base building, allowing the astronaut to enter but leaving the suits – and the irritating and potentially toxic Martian dust – outside.

A completely different approach would be to replace suits that pressurise the gas around the body with tight-fitting, stretchy garments that provide mechanical counter-pressure. This idea was first proposed in the 1970s but has only recently become possible with the creation of suitable materials. One example is the “BioSuit” developed at the Massachussets Institute of Technology (MIT), which uses nickel-titanium shape-memory alloys to form a “second skin”.

Such a suit would also be much lighter than the 130 kg of the EMU. It could also increase resilience, as minor rips or tears would be less likely to cause immediate fatal depressurization. But this kind of suit will still need a space helmet to deliver breathable gas to the astronaut. Interestingly, the BioSuit is rumored to form the basis for the suit being developed by Elon Musk’s company SpaceX for its astronauts to wear inside its Dragon capsule. 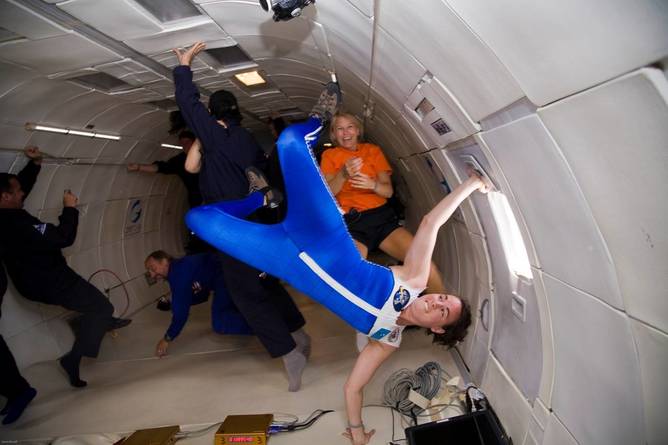 In a spin: the SkinSuit. NASA–Waldie

Astronauts have always worn full-pressure suits during landing and takeoff and once they’re safely in space, for example on board the International Space Station, they can wear shorts and t-shirts. But since the 1970s, the Russians have recommended donning the Pengvin (Penguin) suit in an attempt to prevent the loss of muscle and bone and the spinal stretching that occur when astronauts spend a time in zero-gravity environments. This can increase their height by as much as 7 cm, preventing them from fitting into their space suits or molded seats in the Soyuz transport vehicles that at the moment are the only way back to Earth.

The Pengvin suit comprises a belt with bungee cords wrapped around the shoulders and feet. This compresses the body in a way that loads it with the equivalent of 40kg of weight in order to simulate gravity. The problem is we do not experience gravity on Earth as a weight on our shoulders, and so astronauts usually choose not to wear the suit because it is very uncomfortable.

To overcome this, we have worked with the European Space Agency and international colleagues to create another body-tight suit that creates resistance at each point around the body that is proportional to that of real gravity. This means the full force of the combined “weight” is only felt at the feet, making the suit feel much more natural and comfortable to wear. Our research has shown that this “Gravity-Loading SkinSuit” can significantly reduce spine lengthening in a weightless environment, with a force less than 30% of Earth’s gravity.

ISS astronaut Andreas Mogensen wore the SkinSuit during his mission to the International Space Station in September 2015 but we have yet to find out if he has found it tolerable and whether it reduced any back pain and spine lengthening. Ultimately though, we hope these suits will reduce the risk of back injury due to intervertebral disc prolapse (slipped disc) when the astronauts land – something that would be catastrophic for a mission to Mars.