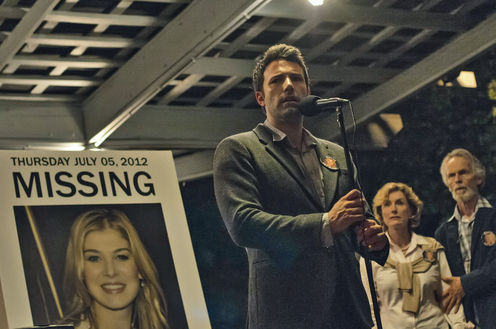 By Julie McIntyre, University of Newcastle

The film Gone Girl (2014) is dividing critics along gender lines. Men see it as a gripping, fresh thriller while women have expressed alarm over a range of issues. Chief in recent days is criticism of the representation of false rape accusations by the main female protagonist Amy Elliot-Dunne (Rosamund Pike), a character who is both misogynist and misandrist.

Still, the most haunting feature of Gillian Flynn’s novel Gone Girl (2012) that has been retained in the film (also screenwritten by Flynn) is the tragic social and economic decline of North Carthage, Missouri. It is against the wreckage of a formerly robust township that the story of the disappearance of the eponymous gone girl, Amy Elliot-Dunne, takes place.

Amy disappears from the low-rent McMansion she lives in with her husband Nick Dunne (Ben Affleck) in a brand-new but deserted housing estate. In this respect the setting was already pretty creepy before Amy vanished. The stark portrayal of uncontrolled de-growth makes it more so. What is degrowth? It is the opposite of economic growth. Rationally managed degrowth may offer a solution to the wider potential horror story of climate change. Meanwhile, there has been an increase since the 2008 Global Financial Crisis (GFC), on American cultural commentary on the shock of uncontrolled degrowth.

A key symbol of this is empty housing estates: eerie reminders of a middle-class inability to afford new suburban dreams. The flipside - the failure of housing investment - is a stake to the heart of postwar entrepreneurship and the American way of life; more horrifying than vampires or a zombie hoard. The decline of this ideal hits home in Australia too, where the Australian way of life, formally identified in the early 1950s, is – as argued by historian Richard White – painfully close to the American version.

In Paul Auster’s post-GFC, Obama-era Sunset Park (2010), Miles Heller is adrift from his parents’ hopes for a traditional middle class trajectory. He’s a college drop-out employed to clean repossessed houses that are littered with damaged consumer goods, faeces and angry graffiti. For his own edification he photographs abandoned everyday objects in these homes; to bear witness, to document the tragedy. We are all familiar with images – historical and contemporary – of urban destruction and abandonment in war zones. Until the GFC, successful post-second-world-war rebuilding stood as a beacon of hope. In Sunset Park, Auster zooms in on a new and hopeless post-conflict zone: suburban America. And recovery seems unlikely.

The Las Vegas housing estate is even more desperate than Nick and Amy’s. There is unreliable power and no garbage collection. Desert sands are rapidly encroaching just as forces of nature consumed fallen civilizations and empires of the past.

Even in the face of the recurring theme of failed housing estates, the scene of greatest dystopian horror in Gone Girl occurs not in relation to shelter but at the core of comfortable consumerism: in an abandoned North Carthage shopping mall stripped of its glamorous fittings, no longer employing local residents and harboring a range of fringe dwellers. The Goldfinch by Donna Tart, 2013. Little, Brown and Company

Living alongside drug dealers and users are a group of men who lost their factory town jobs with the closure of a printing plant rendered obsolescent in the digital age.

In a classic case of the “established” versus “the outsiders” theorized by Norbert Elias, Nick’s father-in-law Rand Elliot believes the police investigating Amy’s disappearance have been derelict in their duty by not questioning the former factory workers sleeping rough in the shell of the mall.

The surreal effect of the night-time vigilante mission to the ruined palace of consumerism is compounded by Nick and Rand teaming up with vicious hooligans to act as their aggressive protectors. It is all the more disturbing that both Nick and Amy lost desirable jobs in Manhattan before their relocation to North Carthage, and Amy was still unemployed when she disappeared. Nick might have empathized rather than wrongfully accused his fellow disenfranchised.

Apart from its deeply troubling portrayal of the feminine psyche and violence against women, Flynn’s Gone Girl does well to depict the desolation of failed suburban promises. Images such as this will surely endure as a cultural symbol of contemporary financial collapse just as powerfully as long dole queues and lone dirt farms from the 1930s Depression.

Julie McIntyre, Research Academic in History at University of Newcastle, does not work for, consult to, own shares in or receive funding from any company or organization that would benefit from this article, and has no relevant affiliations.